The Story of the Boeing Company 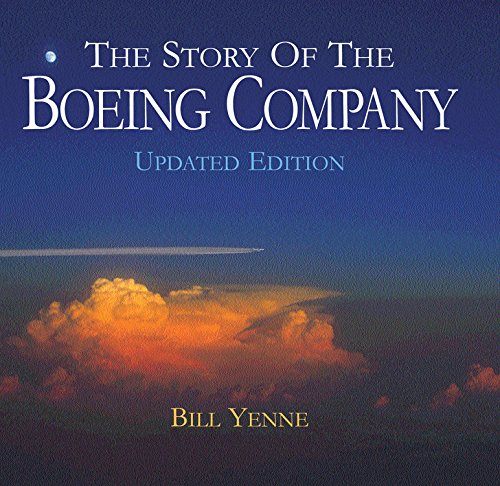 Boeing Company, world-famous as the builder of both large commercial passenger planes and military bombers, started in Seattle, Washington in 1916, and then, in 1927, began a passenger service that evolved over time into United Air Lines. In 1934 Boeing purchased the Stearman aircraft company, added helicopter maker Piaseki/Vertol in the late 1950s, and in 1996 purchased rocket builder Rockwell International. In 1997 McDonnell Douglas was absorbed into the growing Boeing family, along with Hughes Space & Communications in 2000.

Author Bill Yenne gives the reader a quick synopsis of how Boeing’s growth came about but the vast majority of the book concerns itself with the various aircraft that were made by Boeing and affiliated companies between 1916 and the present, ending with the latest space vehicles being produced as of 2010. Approximately 150 Boeing and Boeing subsidiary products are described, why each was built and for whom, followed by first flight details, how many were made, and what the variations were.

How the Boeing company was financed or what its profits were/weren’t is not discussed. Without this dimension, it is difficult to see its products—which seemingly worked flawlessly from day one—in a fuller context. Occasionally, development problems that were out of Boeing’s direct manufacturing control are mentioned, as in the fiery WWII B-29 test crash that killed a key group of prototype developers, but these and other challenging development problems are generally left unexplored. Now and then a sidebar will list improvements and alterations added over time to a particular aircraft, but little of the backstory to these engineering changes is mentioned. Consider a modern aircraft that in recent years was in the news all the time for its seemingly insurmountable problems, the V-22 Osprey (combination helicopter/airplane/troop-transport). It is now, at last, in fleet service but you wouldn’t know how or why from this book. The same goes for the Super Saber YF-100A which suffered from “directional stability problems.” Many fascinating and technically challenging aeronautical problems were overcome by Boeing engineers, but what they were and who solved them is not what this book is about.

There’s no reason to think that what Yenne wrote about Boeing isn’t accurate, but for me the story is only half-told. For example, in 1934, “industry irregularities . . . led President Franklin D. Roosevelt to cancel all commercial airmail contracts.” So grave were these irregularities that the Airmail Act of 1934 was made law, forbidding Boeing joint ownership of their manufacturing company (Boeing) and their commercial airline (United Aircraft & Transport Company). Won’t the reader wonder what these “Irregularities” were?? All we’re told is, “Displeased with this turn of events, company founder William Boeing left the company permanently.”

No story, business or otherwise, is without struggle or strife so glossing these things over makes for an unsatisfactory account. No management mistakes, personality clashes, or financial wheeling and dealing during company takeovers are mentioned.

The text contains such a large number of aircraft model numbers that for me they begin to blur together after 20 or 30 product listings. For example, on page 21, “These were a single prototype of the Model X90 primary trainer produced under the designation XBT-17, a single prototype of the Model X100 attack bomber designated as XA-21, and a pair of prototype Model X120 twin-engined advanced crew trainers which were designated as XAT-15.” Very informative, but hard to retain in a meaningful way after reading a hundred paragraphs or so of similar data. Acronyms also strained my memory in a constant mental retention test that I quickly failed.

But, this is a beautiful book and a credit to book manufacturing in general. Professional photography of interesting airplanes from 1916 and onwards is found throughout. The book’s graphic design is top-notch. The paper weight is perfect and works beautifully with a stitched lay-flat binding that allows easy reading. When opened out to its full 11” x 22” format, the reader can practically fall into the photos. A nice, quality hardcover is wrapped inside an even nicer dust jacket. Someone put a lot of money into the production of this book, and it was not wasted. Presentation is top-notch from beginning to end. While this book is not an official publication of the Boeing Company, Boeing historians reviewed the final proofs, as did people from the old North American Aviation company and elsewhere.

The book opens with two beautiful uncaptioned photographs that speak for themselves, then dives directly into the Table of Contents, followed by the Prologue: Forever New Frontiers. At the end of the book an Index includes a sidebar entitled Company Leadership Through the Years which lists the key people in the ten companies that gradually consolidated themselves into the current Boeing Company. Within the Table of Contents a list headed Production Close-Ups gives the reader a quick picture page reference for 38 important aircraft Boeing manufactured from the first generation flying boats to the F/A-18 Hornet and Super Hornet. Nine chapters make up the bulk of the book, starting with Part I: The Early Years, then Part II: The War Years, and so on to the end with Part VIII: Space and Communications Systems and Part IX: Into The Future.

Yenne has written more than 36 books, primarily on the topic of aviation, plus two well-received Indian histories, Sitting Bull, and Indian Wars: The Campaign for the American West.

This is not really the story of the Boeing company. It’s the story of Boeing products. If you are looking for a historical listing of all the makes and models Boeing made over the years, then this book works well, like a beautifully produced encyclopedia with museum-quality photos and succinctly accurate descriptions. If you’re after a financial and managerial history of Boeing Company, where they went right, and where they went wrong, look elsewhere.

The Story of the Boeing Company

Posted Under: Aviation | Author: Bill Ingalls | No comments yet