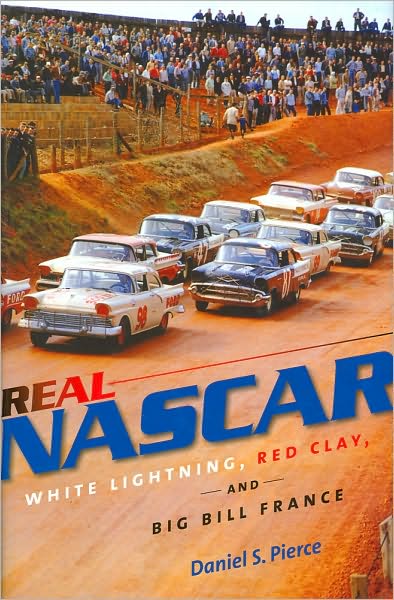 “I grew up within earshot of the Asheville Speedway. . . . Like most Ashevillians who were not race fans, I considered the Friday night races noisy nuisances and the people who frequented the tracks rednecks. My opinion of racing and race fans did not change appreciably over the years.”

Despite this inauspicious start, the author ends the book by saying that writing it has been one of the greatest pleasures of his life. And hopefully there will be readers too who find their initial indifference supplanted with a better-informed sense of the serious history and real drama behind this activity.

For Pierce, a history professor at the University of North Carolina-Asheville, the epiphany came in August 1994 when he attended a Winston Cup race at the Bristol Motor Speedway. That led to becoming a follower of stock car racing and to digging into its history—and, ultimately, this excellent book.

While there seems to be a surfeit of books supposedly about the history of NASCAR, the National Association for Stock Car Auto Racing, and/or stock car racing, Real NASCAR is one of the very, very few that is worth reading.

The history of stock car racing and NASCAR have become intertwined in the minds of racing fans even if the reality is rather different. One finds “stock car racing” being conducted in the early years of the 20th Century and sanctioned by the American Automobile Association. The racing of stock cars in some form or fashion thus predates the establishment of NASCAR in the winter of 1947/1948 by many, many years.

The central core to the mythology of both stock car racing and NASCAR is that it all began with those involved in the production and transportation of illegal alcohol in the Piedmont region of the Southeast stretching from northern Georgia, through the Carolinas, and into Virginia. That a still was featured as one of the original exhibits when NASCAR opened its museum in Charlotte, North Carolina on reinforced this myth in the minds of many. As Pierce points out, moonshine certainly did play a role in the development of stock car racing in the Southeast, but not quite the role that many assume it did. A prominent and widely accepted version of the founding myth of stock car racing is that in the latter part of the 1930s those in the business of transporting illegal alcohol or “moonshine”—“runners” or “haulers”—in the Piedmont area near Atlanta, Georgia, began to get together on Sunday afternoons and hold races on tracks carved out on cow pastures. One such track, near Stockbridge, Georgia, is often cited as, if not the first, then the first notable such venue for stock car racing in the South. Pierce points out that as accepted as this is among stock car racing fans, it is also untrue. For this alone, the book would be recommended!

While Pierce provides a narrative that covers not the early years of stock car racing in the South prior to the establishment of NASCAR, a dollop of context placing stock car racing within the “mind of the South” is also provided. The central character within this tale is, of course, William Henry Getty France, the “Big Bill” of the title. While necessarily covering what is familiar ground for many regarding France, what Pierce provides on the two great confrontations that “Big Bill” had with what might pass for “labor relations” with the drivers, in 1961 and again in 1969, will be of great interest to even the casual reader. While there have been some articles written about these two upheavals within the NASCAR ranks, what Pierce gives us is easily one of the best, and he places them within the context so often missing when this aspect of NASCAR history is discussed.

It is worth noting that for many years, NASCAR was adamant regarding the role of moonshine in its founding and developmental years. The storyline given for years upon years by NASCAR as the preferred mythology was that NASCAR was established to ensure that the drivers would not be cheated out of their winnings by shady promoters who would skip town with whatever was taken in at the gate, leaving all the bills and the purse unpaid. That the number of such documented instances are so rare as to be nearly nonexistent is to not let the facts stand in the way of a good myth! That NASCAR was established with the race promoter (especially one of them in particular, Bill France) as its raison d’être is often ignored or studiously overlooked. It is only recently that NASCAR itself has succumbed to the moonshine runners version of the myth. It should be pointed out that the very vocal protestations made by Big Bill France regarding any involvement with those in the moonshine business are cast into doubt by what Pierce brings to light when France’s involvement with certain tracks and promoters are examined. While not exactly a revelation to those who have studied NASCAR closely, these are the sort of relationships that few of the other looks at NASCAR mention, much less discuss. Of course, given the propensity of NASCAR to be both highly protective of its image and quick to exact vengeance if it considers that image tainted, it is noteworthy that Pierce sheds some light unto this too often overlooked aspect of NASCAR.

Any history of NASCAR that has both footnotes and a university press for a publisher has got to be recommended. In this case, Pierce being an effective and often insightful writer makes such a recommendation even easier.