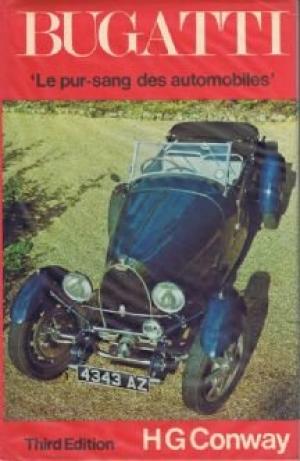 Though not the first book written on the subject of Ettore Bugatti and his charismatic automobiles, it is the first to systematically record them essentially in chronological order in as objective and dispassionate a manner as humanly possible. No small feat when Bugattis are the subject.

At the time of its first publication, Le Patron had already been in his grave over a decade and a half and the last “real” Bugatti automobiles, the Type 101, were only a little more than ten years old, but the aura of legend and myth that surrounded them was such that the time was ripe, if not overdue, for a serious attempt to set the record as straight as possible, limited only by the resources then available. At that time, a half-century ago, the automotive marque history genre was in its infancy. Publishers pegged its appeal as limited to niche market and were hesitant to invest any more than absolutely necessary to bring a highly risky new title to market. The original Bugatti book, simply titled The Bugatti Book, by Barry Eaglesfield and C.W.P. Hampton was published by the specialist London publisher Motor Racing Publications in 1954. It briefly described the 441 surviving Bugattis, by type and number, then known to the Bugatti Owners’ Club of England. It was sufficiently successful to warrant several printings over the next half dozen years, though it was by no means a comprehensive history. Conway’s book was the first to seriously attempt to address that need. The author was a recognized authority on all things Bugatti, a driving force in the marque club (as  his son would be), and considered eminently well qualified to tackle the not insignificant challenge. It had to be a spare-time endeavor, as at the time he was in the midst of his career as a professional engineer. To say that he succeeded, even if not perfectly in all respects, is to put it mildly and runs the risk of minimizing the enormity and complexity of the task.

The format is the then near-universally used standard 6″ x 9″ vertical layout, something today’s reader considers unbearably small. The vast majority of motoring books in English at that time were published by British publishers, and though the American edition published by Robert Bentley, Inc. (no affiliation with Bentley Motors (1931) Ltd.) is the subject of this review, the British publisher was G.T. Foulis, a general publisher who eventually specialized in transportation topics. The two editions are identical in all respects, save the publisher’s name and address on the title page. Indeed, Foulis’ logo is found in the lower right hand corner on both. Foulis and Bentley were sufficiently confident to use high quality matte finished paper for the text and numerous line drawing and perspective illustration pages and glossy art paper for the approximately 140 pages of photographs that make up nearly a third of the book. That large a percentage of a book devoted to photographs was in itself virtually unprecedented. High quality photographic printing was expensive and added substantially to the costs of production, but the publishers wisely realized the story could not be adequately told without them.

In what would prove to be another trendsetting innovation the photo sections are spread throughout the book, in two- and four-page sections, in relatively close proximity to their related chapters, contrary to the then normal practice of confining them to one or two sections arbitrarily located approximately in the middle or about one-third and two-thirds of the way through. The line and perspective drawings are clear and sharply reproduced and large enough that important details are easily visible. Clearly, it was intended from the start to substantially raise the bar on what was to be considered a first-class job in the genre. Published at $16.50, a price that doesn’t warrant a second glance today, it was in the near super-premium price range fifty years ago and reflected the unusual costs involved in its production. Few copies were bought as impulse purchases, we can be sure. (I purchased my copy in 1966 as one of the very first books in my permanent automotive library. I had a good-paying part-time and summer job that allowed me to indulge in such luxuries from time to time, though the vast majority of what I earned was put into savings for college. My best friend, who was also a motorhead, was astonished that I’d spend that vast sum on a book that wasn’t required reading. Back then, $5 could fill your gas tank, as long as you didn’t let the needle get too close to “E” before refueling.)

The book is divided into four parts and appendices, though there is no Index. Part I deals with the cars themselves in order of Type, which is essentially in chronological order as well. This occupies the first 318 pages. Part II is devoted to historical information concerning Bugatti’s early designs, how the firm was started, the highlights only of factory racing activity from 1920, and activities in other forms of transport, on water, in the air, and on rails and consumes 82 more pages. Part III is described as “A Bugatti Miscellany” and covers a variety of topics related to the cars and the ownership experience and runs to 28 pages. Part IV, the shortest at 10 pages, is devoted to the Bugatti clubs of the UK, USA, Netherlands, and Germany. The two Appendices account for an additional and final 12 pages.

Part I’s chapters on the individual Types incorporate summarized factual information derived from primary sources. Early catalogs, instruction books, and other official sources are typically those sources and are quoted directly, thus eliminating conjecture and opinion. In another innovative move, the author quotes liberally from the contemporary automotive press, especially on new model introduction articles as well as auto show and road test reports. While this effectively and commendably removes his personal bias, it introduces the bias of the automotive writers of the time, who were rarely critical of even the most glaring deficiencies they encountered in the course of their trials. If they did mention them at all, they usually used language that “damned with faint praise” to the point where the reader could get the impression that these thinly disguised defects were in fact desirable features. Of course they must be taken with a grain of salt, but from the standpoint of historical accuracy, it is important that they be included. As all the Bugatti Type numbers are discussed, they all receive approximately equal coverage. This means that due to the necessity of keeping the size of the book reasonable, the most interesting Types don’t receive much more coverage than some of the more obscure. Over the intervening years that issue has been addressed by succeeding authors.

Despite its price, the book was commercially successful. It has been updated and republished in at least four subsequent editions not including the ultra-premium revision retitled Bugatti Magnum of 1989. Right from the date of publication it was enormously influential on the genre. Authors of subsequent single-marque histories immediately realized that by contemporary standards it was a tough act to follow and if they wanted their own book to be as highly regarded, it had to include the features introduced here and, if possible, improve on them. The original edition, the subject of this review, though long out of print is readily available through the major online book clearing houses and at quite reasonable prices. The fourth edition (by Haynes, 1987) was in fact a major revision that switched to a horizontal format and utilized glossy paper throughout and introduced many new previously unpublished high-quality historical photos. At this point it transitioned to be a primarily photographic reference work. The original text was carried over intact, but the photos, which were emphasized by their much larger sizes and larger pages, were now the center of attention. But in this regard it was no longer a trendsetter. It was now merely keeping up with the revolution it had been largely responsible for starting a quarter century earlier.

This is truly a landmark book, considered by many to be the Bugatti “Bible,” on a subject of continuing interest to automobile enthusiasts of all ages. It did an exceptionally fine job of covering an extremely complex story in a forthright manner, and in so doing became a standard of excellence in historical automotive literature. It is the foundation on which virtually all subsequent historians have expanded the body of Bugatti knowledge. As such, it belongs in every serious automotive historian’s library.