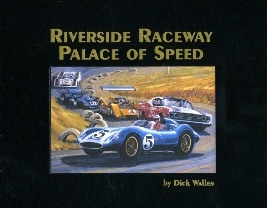 “It’s doubtful that anyone ever thought of Riverside Raceway as a palace. It was commonly called the Too Raceway—too cold, too hot, too windy, too dusty and sometimes even too wet.”

The Riverside International Raceway opened in October 1957 and finally closed for good after several “final” races in July 1989; and both the opening and closing race meetings were marred by fatalities. The Moreno Valley Mall, along with other examples of urban development, now occupies almost all of the land that was once part of the racetrack.

Once among the premier venues for automobile racing in the US, Riverside International Raceway was located in the Riverside County community of Edgemont, just outside the city of Riverside itself—and much further from Los Angeles than most folks from the East Coast realized. During slightly over three decades in operation, the track hosted just about every form of automotive competition imaginable that could be held within its confines: sports car racing, drag racing, off-road racing, stock car racing, USAC national championship and CART world series racing, Formula 5000 events, midget and sprint car events, and even a round in the World Drivers’ Championship. With its demise, automobile racing in Southern California has never quite been the same.

This book has the same physical features as others from Dick Wallen Productions: sturdy covers, landscape format (11 x 8½ inches), heavy paper stock, a painting gracing the front cover, and lots of photographs. Despite such “coffee table book” features, these are books with serious intentions.

Another aspect that is also common to Dick Wallen books is that they are a collaborative effort, no matter whose name is on the cover. While carrying Wallen’s byline it is Michael Jordan who is credited as editor. Wallen handled, as usual, layout and design and Mike Chavez did the graphic design. Also as usual, the heavy lifting in the writing department is borne by Bob Schilling, who is solely responsible for four of the twelve chapters (including the epilogue) as well as sharing the credit for two other chapters. Wallen contributes two of the chapters to the book.

The contents are laid out thematically, that is, the history of the track being covered by the basic type of racing or series rather than a straight chronological approach. Each individual chapter uses the chronological approach, of course. This results in a rather mixed bag of material, with some chapters bringing various types of racing held at Riverside to the attention of those who might be unaware that, for instance, the back straight at the track hosted drag racing from literally opening day as well as the Hot Rod Magazine championship drag races, a major West Coast event during the Sixties, or the off-road races that began with Mickey Thompson launching the inaugural event in October 1973 and the final meeting being held in August 1988, literally in the waning days of the track. Often forgotten are the road races for Midgets held in the early years or that there was a half-mile oval completed in 1960 that hosted Sprint Car, Midget, Modified, and stock car events.

Photo selection and reproduction tend to be, as per the usual Wallen standard, excellent and superb respectively. Given the variety of the racing held at the track and the number of authors—in addition to Schilling and Wallen there several others: editor Jordan, Greg Sharp, and Dave Argabright, also pen chapters—the narrative understandably tends to wanders a bit, making some of the chapters more informative (or at least interesting or entertaining) than others. While certainly not a major problem but more a minor nuisance, this is most noticeable when you read Riverside Raceway cover to cover rather than dipping in as I suspect most will.

Speaking of the narratives, the chapter on the NASCAR races attributed to Dick Wallen is little more than recycled press releases or clippings condensed to a paragraph or two, rather than any attempt to provide something with at least a modest amount of perspective. The chapters on off-road racing and drag racing, the two oddities for most people reading the book, make the most of what little space the format provides, generally sketching out the background of the type of racing well enough to be interesting while also managing to be generally informative. Some of the individual entries in the chapters are very well done, capturing the essence of both the particular event and the racetrack. Overall, the writing is probably far better than it needs to be for what is essentially a coffee table book, whether Wallen intended it as such or not.

Once again, Wallen leaves the collection of race data to the late Phil Harms. In Riverside Raceway, the sequence of the data conforms to the chapters of the book. At least, they do at first glance. There is little in the race data appendix for the Midget and Sprint Car races, for example, that took place in the opening years of the track, these being crammed into a spot well to the rear of the section rather than being listed towards the front with the—scanty—data for the early sports car event they were contemporary to. Nor does there seem to be any record of the American Road Race of Champions, the first of the season-end runoffs for the Sports Car Club of America (SCCA) that would replace its season-long Nationals championships that held its inaugural event at Riverside in 1964 and hosted several times after that. Indeed, it seems as if the various Cal Club and SCCA events held at Riverside scarcely get much, if any, mention in either the narrative or the race data—an odd omission. As for the data itself, generally, only the Top 10 finishers are listed for the events held at the track for that series, such as Can-Am or IMSA.

Given that Riverside Raceway is the only book to eulogize the passing of the Riverside International Raceway and does so with a collection of photographs that are often eye candy of the first degree, provides a good background as to how the track came to be and got built, and then makes an effort to provide highlights of the various types of racing that took place over its thirty-plus seasons, it is difficult to not recommend the book. While it might spend more time on the coffee table than the desk as a hardcore research resource, it is a worthy addition to one’s automotive library. It is surprising how many times I have pulled it off the research shelf to look something up.

An Account of Partnership  – Industry, Government and the Aero Engine »
« A Higher Call