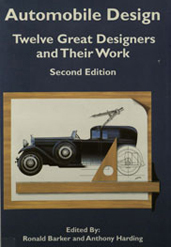 This is a very worthwhile acquisition—and not only because it is a lot of book for the money. The book is a collection of biographical essays of 12 designers of whose work the authors say “the current state of the art owes a lot to the knowledge which other designers have absorbed from them.”

First published in 1970 it won the AACA’s 1971 Thomas McKean Memorial Cup for historical research. The arc spans from the Bollées’ steam cars to Colin Chapman’s racecars. The authors intentionally chose to feature designers whose work had not yet been exhaustively documented. If these names—Bollée, Lanchester, Leland, Ledwinka, Birkigt, Porsche, Miller, Jano, Voisin, Issigonis, Giacosa, Chapman—weren’t household names in 1970, they are, sadly, even less so now. But even the single-marque classic-car enthusiast would benefit from adding these names to their vocabulary. The 14 writers portray their subjects as people and describe their lives, personalities, and careers. They propose that we have “to understand them as men before we can understand their cars.”

From Hispano-Suiza’s quiet Marc Birkigt to the extrovert Alec Issigonis, from the moving story of the topsy-turvy life of Harry Miller to Gabriel Voisin’s staggeringly cantankerous arrogance, we are introduced to 12 lives of faults and idiosyncrasies and genius. This human angle will entice even the reader who is not interested in (perish the thought . . .) things mechanical. Anyone with an interest in people and an appreciation of a job well done, no matter in which walk of life, will be taken in by these portraits. (If you’re quick at math you’ll probably wonder how 14 contributors wrote about 12 designers: in two instances authors teamed up to cover their subjects.)

For the engineering-minded there are plenty of drawings of engines, photos of assorted apparatus, and a sufficient level of detail to describe technical aspects coherently. Illustrations are, in fact, a prominent aspect of this book. So prominent that they take pride of place and are enumerated on no less than seven pages right in front of the book, following the table of contents. Likewise the Index calls out illustrations in boldface type. As in other SAE books, the b/w photos are well reproduced but line drawings are often a bit fuzzy. Overall the book has that typically Spartan SAE signature look.

The book has another noteworthy quality that makes it desirable in and of itself. These writers know how to turn a phrase! They all have distinct styles and are a joy to read. LJK Setright, Michael Sedgwick, or Anthony Bird are already familiar names to anyone familiar with the classic automobile literature. Bird, himself a one-time owner of a 1903 tiller-steered Lanchester, penned the essay about Dr. Fred Lanchester. If you already have the original 1970 edition, do note that this new edition now includes Fiat’s Dante Giacosa (written by LJK Setright) to make it a round dozen.

Short bios of the contributors and an index round out the book. Won AACA’s 1971 Thomas McKean Memorial Cup.

The Silverplate Bombers: A History and Registry of the Enola Gay and Other B-29s Configured to Carry Atomic Bombs »
« Cars: Freedom, Style, Sex, Power, Motion, Colour, Everything