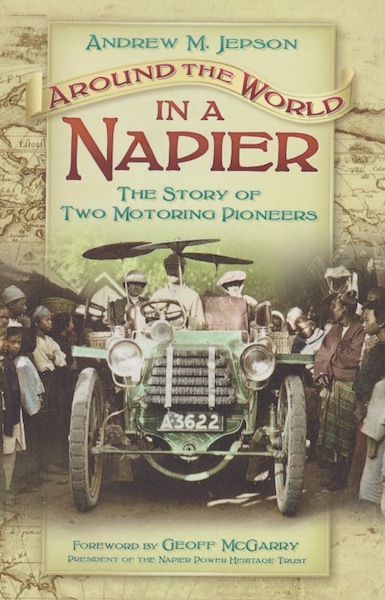 “The many thousands of miles of trouble-free motoring in demanding conditions were undoubtedly due to Charles Tomas’s technical skill. However, at all times, Glidden expected deference and was not prepared to admit of any human circumstance that conflicted with his wishes. After their tour of Britain they parted company and never met again.”

I must admit to not being a great fan of period motoring travelogues, the car interest usually comes second to the places visited. This book is different and for many years I have wanted to learn more about American millionaire Charles Jasper Glidden who took his 1902 Napier twice around the world. He was accompanied throughout by Charles Thomas, a Napier employee who was recommended to Glidden by S.F. Edge. Hearing of Glidden’s plans to take the car around the world Edge wanted to be in on the publicity this might attract especially as Glidden was to report his progress regularly in the Boston Globe.

I am a closet railway enthusiast and what had attracted me to Charles Glidden was the fact that he had a set of railway flanged wheels made for the Napier so that he could cross America by rail! In 1904 he went from Minneapolis to Vancouver by rail. He carried a railway conductor with him at all times, and he was booked in as a train, and duly had to take his place in the timetable. He claims the Napier was capable of 60 mph on rails and so he did not cause an obstruction, and in many cases he caught up with the train in front! The roads in parts of America were bad particularly, and rail was the only way to reach the western coastline. Whilst on the railway theme, right at the end of the book there is the following description: “On 22 November the Napier left Chicago bound for Kansas City and then El Paso on the US-Mexico border . . . 50 miles north of Mexico City the Napier hit a stone wedged between the main and the guard rails, causing it to jump the tracks . . . and came to rest partly overturned . . . the front wheels were destroyed and both axles sprung . . . the car was then shipped to London and put back in condition to continue the world tour.”

This book has been written by Andrew Jepson who is the grandson of Charles Thomas. Thomas kept some notes of the journeys but in particular he took lots of photographs most of which have survived. Andrew’s mother had sorted these into albums and involved herself in a lot of research into the places that had been visited. As a result of this many of the most interesting photographs feature not only the car but local places and people.

Of course in some countries this was the first motorcar the locals had seen. From the pictures you get a good idea of the state of some of the roads. Whilst in Japan they became the first car to climb the Hakone Pass. We are told “The road was very bad and a lot of hard work and trouble would have been saved had they hired a team of horses to pull the car over.” The distance was no more than six miles but it took them eight hours, negotiating severe hairpin bends every hundred feet and gradients as steep as 20%. At the summit they were rewarded with the finest view in all Japan.

Posted Under: Automobiles, British, Travel | Author: Other | No comments yet

The Car: The Rise and Fall of the Machine that Made the Modern World  »
« Pebble Beach Concours d’Elegance