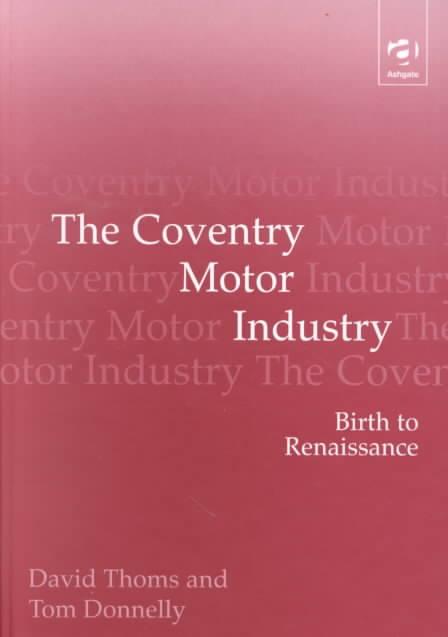 Coventry is synonymous with both the creation and relative decline of the British motorcar industry. This academic text explores the relationship between the car industry in its local context, and the wider economic, social and political environment. It analyzes the emergence and early dominance of Coventry’s motor manufacturers, the rise of volume production in the 1930s, and the instabilities and renaissance of the postwar era.

Specific chapters deal with the industry’s response to the demands created by the two world wars. A number of themes run throughout the book, including the structure of the industry and the relationship between its various sectors, resource provision, management and labor relations, and the nature and response to market demand. It offers insights into the history of some of the most evocative marques in the industry, including Daimler, Jaguar, Alvis, Siddeley, Standard and Rover—a veritable alphabet soup of carmakers.

This 2001 edition is an updated version of the 1985 The Motor Car Industry in Coventry Since the 1890s. The reader with “big picture” interests will find in it a solid addition to the well-stocked reference library. Recommended to be read alongside the various marque histories of the region’s manufacturers, or, for that matter, British manufacturers in general since the same laws of the universe that govern the disposition of men and machines apply in Coventry much the same as in the rest of the country.

The book is probably best described as a business history although the authors are firmly grounded in automotive history and show a commendable grasp of the details. Neither of them is an economist per se; Thoms is a historian (De Montfort University) and Donnelly (University of Coventry) a Member of the Motor Industry Observatory. (Thoms, by the way is also editor of The Motor Car and Popular Culture in the Twentieth Century, another academic text that deserves to be more widely known.) The book is tightly written. No fluff, no waste. Just the facts, ma’am. A bit breathless even. Blink and you missed something.

A lot of ground is covered in 200 short pages as Coventry’s origins as a center for ribbon weaving and watchmaking in the 1850s is linked to—what else—location, location, location. Market changes caused the demise of those sectors; hunger, inventiveness, and the presence of a skilled workforce brought forth a thriving cycle industry which would evolve into a thriving automobile industry. And yet . . . despite so many of the right ingredients, Coventry—Britain’s Detroit—has become synonymous with the demise of an entire industry. The book embeds what happened in and to Coventry into the larger context of Britain’s economic, social, and political environment. The calling card of the British auto industry is the biannual British International Motor Show near Birmingham where nowadays new names claim their place in the automotive lexicon. Parradine, Ascari, Ronart, Strathcarron will probably no more become household names than Marcos, TVR, Caterham or even Morgan or Jensen but they do show that the specialist manufacturing and inventiveness that started it all is still—or again—alive.

Well written; well presented (a very few typos); 30 tables; notes; index—as stated in the beginning: a solid book and totally up to date at the time of its writing.