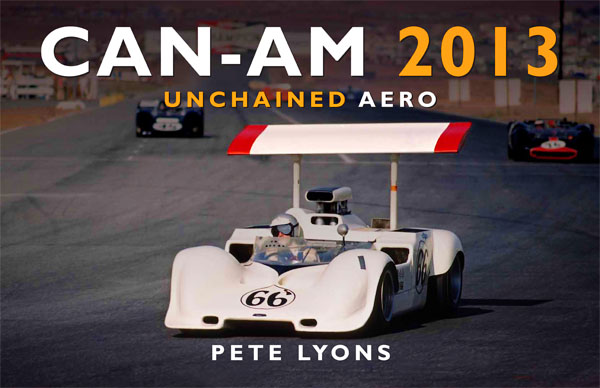 Yes, it’s only August—but you know the next year is coming so you might as well start thinking about calendars. Besides, there are only 1000 copies of this one and with a name like “Pete Lyons” on it you can’t expect it to stay on shelves for long.

Now, before all you calendar-makers get ideas and bury us in calendars, don’t! We do not normally review calendars and the two exceptions we’ve made were for good reasons. Lyons gives you two photos for each month, one large and a related, different one in smaller size, along with suitable but brief text that, if read in all 12 installments at once, amounts to a mini history of Can-Am racing.

Unless you live under a rock you must know that Lyons, by now winner of a longish list of awards, has paid attention to Can-Am racing since its inception in 1966. Of his by now nine books (two more in progress) three were about this technically innovative racing series. These books have materially advanced the body of knowledge, not only in regards to the cars and drivers proper but also the visceral essence of what made this series so singularly different. Add to his writing the ability to take a mean photo and you have a combination that gives his work the sort of heft that elevates it to a level that makes SpeedReaders review even a “mere” calendar of his. 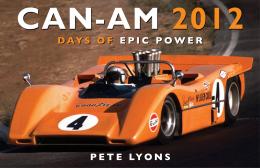 This is his third Can-Am calendar and the second with Octane Press. None of the 1966–1974 photos in this one have been used before and each year has its own “theme.” Designed by Tom Heffron, the calendar is big (17″ wide, 22″ tall hanging on the wall) because Can-Am cars are big—not literally big but big in the sense that big hair is big. Larger than life. This year’s theme is “Unchained Aero” which in those days mostly meant wings, big wings at that, and adventurous front-end treatments that are visually much more obvious/dramatic than today’s often less visible aero in the form of lots of little winglets or underbody work.

Pete likes to say he grew up on racetracks. His father Ozzie was the US correspondent for the British magazine Autosport, a role Pete took over in due time and held for six seasons before expanding it to “international F1 reporter” for the next four years during which he did the same job for the US publication AutoWeek. All this racing activity—even his wife is a former editor of the SCCA’s Sports Car magazine—means Pete is sitting on six decades worth of photos of many forms of racing.

It is not at all impolite to say that the photos in this calendar are not “art.” Their virtue lies in being a photojournalistic document of a moment in time. Since the folks who’d want this calendar are probably serious car people we shall enumerate the 12 main images. Needlessly to say it is not coincidence that they are in year order:

If these photos, or the ones on Lyons’ website, whet your appetite for his work, know that all his images are available in custom sizes, scanned by him from the original film, electronically cleaned up to look their best, and printed with long-life pigment inks. And autographed! As will be this calendar if you order it directly from him.