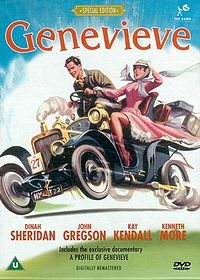 Had a rough day at the office? Need to escape from the pressures of modern day life, yet don’t quite feel up to the continuous explosions and pyrotechnics that pass for entertainment in today’s motion pictures? Want to see one of the nicest films about automobiles ever made? Then, I highly recommend the movie Genevieve.

This film, made in 1953 on a super-tight budget, by a 39 year-old director who was also the film’s producer, has old cars, romance, comedy, gentle action, along with sex appeal and charm enough to drain away the day’s tensions—it almost guarantees you’ll be in a good mood after seeing it.

The story is simple: two couples are entered in the annual London to Brighton Rally, which (for those unfamiliar with it) is for cars built before 1905. Alan McKim (played by John Gregson) is a lawyer (barrister in the UK) whose wife Wendy (played by Dinah Sheridan) is growing tired of going on the event each year. She’s also unhappy about the time that McKim lavishes on his automobile, the 1904 Darracq named Genevieve.

Meanwhile, the wonderfully named Ambrose Claverhouse (played by Kenneth More), who is an advertising executive and something of a playboy, boasts about the reliability and performance of his 1904 Spyker. Claverhouse shows up at the starting line each year with a different female companion—invariably young, glamorous, and beautiful. This year he arrives with fashion model Rosalind Peters (played by Kay Kendall, whose career as an actress was beginning to wane before she took the role in Genevieve). Kendall plays the role of a pampered and spoiled diva to perfection.

The London to Brighton run starts out well for both couples with the scenes along the road, right from the starting line, wonderfully evocative of motoring in England both before 1905 and during the 1950s. We watch as the veteran cars inch their way along the highways and lanes, and deal with the contemporary traffic of the early 1950s.

Unfortunately, McKim’s Genevieve has a myriad of problems along the way. When Alan and Wendy finally do arrive it is long after everyone else—including, of course, Ambrose and Rosalind. Claverhouse makes some unflattering comments about McKim’s Darracq, inflaming an already seething tension over Wendy’s alleged former romantic interest in Ambrose. Thus the two men end up in a wager: the next day they will race back to London with the first across the Westminster Bridge deemed the winner. The stakes: nothing less than ownership of Genevieve.

The race itself, highly illegal and grounds for dismissal from the Veteran Car Club, is where the fun really begins. Each man is determined to win by whatever means necessary and each sabotages the other in every way possible. It is funny and exciting in a sort of gentle 1950’s way. In the end, nobody gets hurt, and it’s not giving away the story to tell you that McKim gets to keep his beloved Genevieve. (You knew that anyway.)

Originally, director/producer Henry Cornelius wanted to use two English-built automobiles for the movie, but he couldn’t convince any owners to let him have their cars for the filming. The French-built Darracq and Dutch-made Spyker finally came available. The irony is that the film was eventually a huge success in the UK and the little 1904 Darracq named Genevieve is now one of the most famous and much-beloved Veteran automobiles in all of England.

The film was also good to its actors, all of whom were already well-regarded in British theater. Kendall’s career was revived by the film, More’s took off, and Sheridan and Gregson added to their already growing resumés. After a slow box-office start, Genevieve won the BAFTA for Best British Film and received an Academy Award nomination for its musical score, which features a lovely harmonica theme played by Larry Alder. The script was written, surprisingly, by an American, William Rose, who managed to get all of the British Veteran Car stuff pitch perfect.

For a long time Genevieve was all but unavailable to American audiences. I recall seeing it once on Saturday afternoon television back in the 1970s. But now it is available on DVD from Carlton Visual Entertainment, digitally remastered and with Dolby digital sound. As this is the 21st century,Genevieve is also available from Amazon’s Video on Demand, at $2.99 for a seven-day rental. It is a car movie worth watching and results in about as much fun as anyone could imagine from a charming movie about a 1904 Darracq named Genevieve.