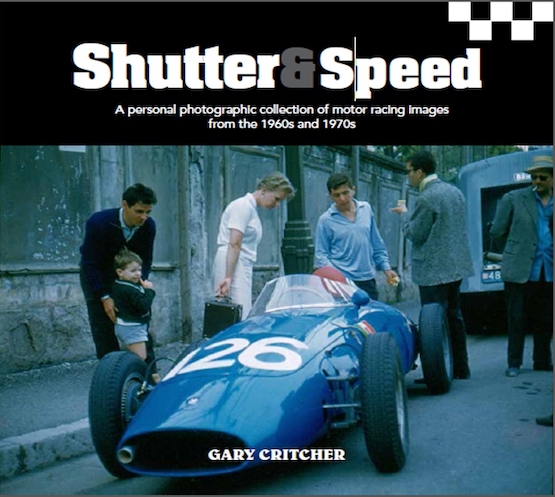 Once upon a time, it was not all that unusual for someone to put together a collection of photographs on a particular topic and then get them published. Generally, such books tended to be reasonably priced, had page upon page of interesting and even fascinating images, and were the equivalent of ants in amber. Yes, often enough they were blatant vanity projects. Too many had, to put it charitably, widely varying production values. Even so, they were interesting because photos capture a specific, unique moment in time that only the photographer saw this particular way.

Book-making and print technology have come a long way, and, who knows, printing on paper in the digital era may well be an anachronism but this new book makes a good case why that shouldn’t happen. (It is, incidentally, available as Kindle version.)

Shutter & Speed presents itself as “A personal photographic collection of motor racing images from the 1960s and 1970s” and is the first of at least two planned volumes. It is the work of Gary Critcher who describes himself as a “vaguely retired TV person.” He has worked on the technical side of broadcasting in the United Kingdom for ITV, the BBC, Sky, Discovery, and was part of the F1 digital television effort. In addition, Critcher has been a longtime motor racing enthusiast and competitor. Not to mention a collector of a vast archive of imagery relating to motorsport.

One of the things that truly impressed me when my copy of Shutter & Speed arrived is that it is a quality effort. Before you even open it, the book has that hefty feel that only comes when using quality paper. That sense of it being a Serious Effort continues to the contents. The choice of the cover photograph, the Osca driven by Colin Davis in the Formula Junior event held at Monaco in 1960, is evidence that Critcher intends to stray into places that often tend to be ignored in the usual publications on motorsport. If it seems to flit from this to that, from the 1962 Malaysian Grand Prix to the Broadspeed Anglias, by way of several editions of the Race of Champions, that was how motorsport was in real life: a delightful hodgepodge of different types of events across a range of venues.

If there is one selection of photographs that literally stopped me in my tracks it is the series of images from the 1969 Indianapolis 500 mile race that center on Team Lotus. Critcher described them to me as “the original 35mm slides by a former Team Lotus mechanic (Chalkie Fullalove) he came across about six years ago.” These images are nothing short of amazing, giving us some insight as to what Team Lotus dealt with that year.

As mentioned, Critcher is currently at work on a second volume, which promises to be the equal of this one. Shutter & Speed will not be available on Amazon or found in bookstores and can only be ordered from Gary at: http://www.shutterandspeed.com/

A special Limited Edition of 100 signed and numbered copies is available for only a few £ more that also gets you a DVD of an award-winning 7 minute film that Critcher’s late friend Freddie Barratt produced in 1967; it shows the demonstrations of old cars that took place just before the British Grand Prix and you’ll see people like Moss, Jenkinson, Fangio, Brooks, Salvadori, Mays, Étancelin and more.

[Full disclosure for my shameless plug of the book: Gary is very much a longtime member and contributor to a forum that I created and which is now in its 20th year: The Nostalgia Forum. Besides that, he is really nice guy.]

The 1968 London to Sydney Marathon »
« Kings And I, My Life With Rolls-Royce Cars