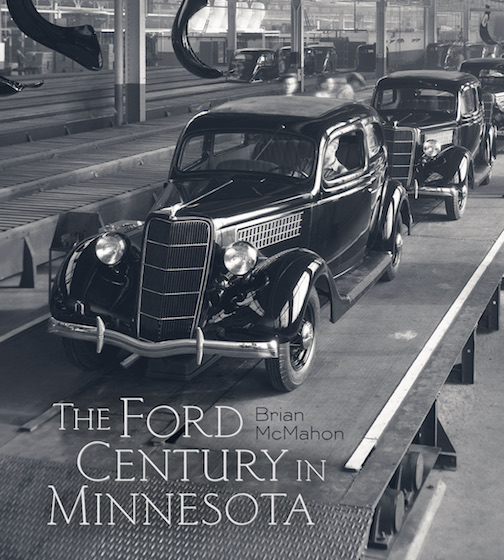 For very near to 100 years, the Ford Motor Company maintained a major assembly operation in the Minneapolis/St. Paul area. After evolving production processes obsoleted two initial assembly plant locations, Henry Ford opened a new and magnificent Minneapolis/St. Paul branch plant in 1925. Built on land personally selected by Ford along the St. Paul side of the Mississippi River, the single-story Twin Cities Assembly Plant was designed for mass-production. At its opening it was said to be “The finest plant in the world.” It would serve Ford into the 21st century.

After dedicating a chapter to Ford’s early activities in Minnesota, this book presents seven concise yet well-detailed chapters documenting the continuous transformation and renewal of the Ford Twin Cities plant through the more than eight decades it operated. The stories of the people who envisioned, built, managed, and worked at the plant—and the vehicles made there—are at the heart of this book.

A trained architect, author McMahon gives insights into the design and construction of the plant that, while peripheral to most car enthusiasts’ interests, are fascinating. For example, the innovative method a contractor used to pour the plant’s concrete foundations in the Minnesota winter demonstrates the “can-do” attitudes that Henry Ford demanded of those who served him.

The book details how, for decades, the Twin Cities plant uniquely produced its own glass, from high-quality silica mined from beneath the plant. The plant’s hydroelectric power source was also unusual and required much negotiation between Ford and authorities to bring on line.

Driven by a genuine desire to make quality cars affordable to almost everyone, Henry Ford wanted to deliver his mass-produced Model T as quickly and efficiently as he could. The assembly methods the company used to save on railroad freight charges offer but one example of the quest for cost-efficiency. McMahon also informs us of Ford manufacturing initiatives that in one way or another affected the plant. These include Fordson tractors, which were assembled at Twin Cities, and Ford’s foray into commercial aviation, which became intertwined with the formation of Minnesota-based Northwest Airways (later Airlines).

Plenty of fascinating facts relating to the vehicles produced in the plant emerge in these pages. Before World War II, cars produced at Twin Cities included the Model T (1925–27), Model A and V8 cars (except during the plant’s 1933–35 shutdown). During World War II, the plant produced the M-8 armored vehicle. Postwar, full-size sedans and coupes dominated until 1978, when the plant turned to truck production exclusively. Trucks had been built at Twin Cities since 1926. F-Series production continued into 1991. Ranger pickups were the focus from 1992 to the plant’s 2011 closing.

Much of the post-WWII text deals with the rise of the American middle class and the conflict between organized labor and management. However, the plant itself and the vehicles emerging from it are always key to the story. More than forty retired autoworkers shared their memories of working at the Twin Cities Assembly Plant with the author. Their contributions illuminate the pressures and challenges of mass-producing ever more complex automobiles at a fast pace. The malaise that slowly but surely overtook American auto manufacturing by the 1970s clearly emerges in these chapters. Solutions, successful and otherwise, put forward to reestablish production quality are also well documented.

Content relating to the annual new model changeovers once typical of US auto production is especially enlightening. By the mid-1950s, “can do” was too often of necessity being replaced with “make do.” A detailed description of the “tooling prove out” process for mid-1960s Fords, for example, provides telling insights into how high-volume cars were actually built in that period.

In 2011, the Twin Cities plant shut down for good. Spirited attempts by virtually all concerned to close ranks and pull together for a future that never came are movingly told. Globalization and evolving logistics were just too much to overcome.

Solidly based on 18 years of research, this handsome, well-written and serious hardbound tome transcends the “local history” category. In his Introduction, the author states, “This book looks at Henry Ford and his company through the lens of one place, Minnesota.” It succeeds in this regard remarkably well. Although there is little new to learn about Henry Ford and those who followed him at the helm of Ford Motor Co., the insights provided as to how Ford corporate efforts and strategies impacted a branch plant and the people who worked there reflect much about the legendary founder and his successors.

About one quarter of the book’s images depict Ford vehicles. Many are credited to Minnesota sources and will be fresh to most readers. A handful of captions could be tweaked from the product perspective, but most are sound and detailed. Even the sources and acknowledgments sections are well organized and informative. A thorough bibliography and index are also provided.

Overall, this reviewer believes the book will make a worthy and enlightening addition to the library of most any Ford-centric collector. The book is foremost about people, but the vehicles they built at Twin Cities are also well represented. For most any reader, the book will provide a much greater understanding of the incredibly complicated and ever-changing environment in which American cars were built in the 20th century.

1967: Chris Amon, Scuderia Ferrari and a Year of Living Dangerously »
« Death Drive: There are No Accidents