As a Matter of Fact, I Am Parnelli Jones 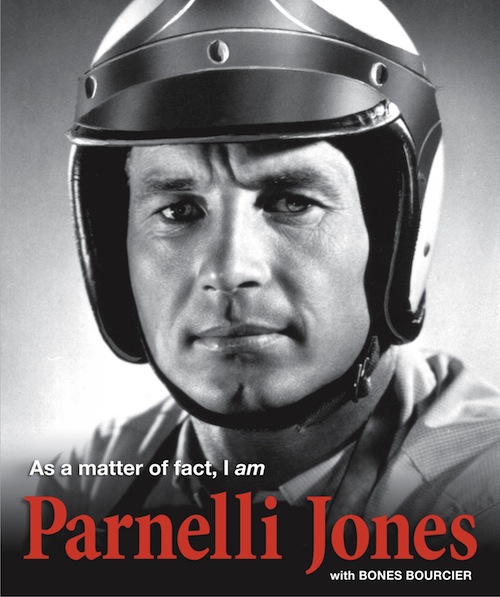 by Parnelli Jones with Bones Bourcier

“Sometimes I’ll read about myself, or listen to someone discuss what I’ve done, and it’s like I forget they’re talking about me. I mean, I feel great about what I’ve been able to accomplish, but it seems like “Parnelli Jones,” this guy people think is a celebrity, is another person, not me.”

One of those times Rufus Parnell Jones probably did wish he was someone else was when a cop pulled him over for speeding with the words, “Who do you think you are, Parnelli Jones?!” Parnelli’s answer is what inspired the title of this book. What irony that he is named after a judge!

So well established was Parnelli’s reputation for speed that his was once a household name. Often referred to as America’s most versatile race driver—Indy cars, NASCAR, Trans Am, Baja—he is now 80 years old and the oldest living Indianapolis 500 winner (once as a driver and twice as a car owner). As a driver he qualified a stout seven times there between 1961 and 1967 and this book coincides with the 50th anniversary of his 1963 Indy 500 win from pole over Jim Clark.

This book is more a memoir than an autobiography inasmuch as it doesn’t give a fully micro-detailed account. Indianapolis resident and co-writer Mark “Bones” Bourcier is an award-winning motorsports journalist and has helped three other racing-related personalities write their autobiographies as well as written a biography of his own. This background (he’s also editor-at-large at Dick Berggren’s Speedway Illustrated) and having been around American automobile racing professionally since 1976 gives him both a large frame of reference and the pull to keep Jones on the straight and narrow. So do the 19 other “eyewitness” commentators—racing peers and family members—who one at a time offer their thoughts at the end of each chapter that begin with an introduction by Bourcier and continue with remembrances by Parnelli. The story is told in chronological order and while it is easy enough for Bourcier and Parnelli to be in synch and shed light on the same period from different but complementary vantage points, it is remarkable that the right sort of people could be found to write testimonials that fit right in. They may not always be complimentary—Parnelli was an aggressive driver—but they illustrate the level of respect he engendered. And it is really the fullness these many other voices provide that make this book a standout. One voice is missing here and that is his friend Carroll Shelby’s. Parnelli considered him his hero but almost a decade older, Shelby died in May of last year (2012).

Parnelli may be the Elder Statesman (which is the title of the last chapter) today and, not having anything to prove, allow himself the luxury of being mellow but there was a time when he let his fists do the talking. On either end of the timeline he is a straight shooter and looks at the good and the bad without pretense. What started with “I had a desire to be somebody, but no plan” turned into a storied career across several disciplines of racing.

The Fore- and Afterword are both by another pillar of the American racing community, Mario Andretti who has a multitude of connections to Parnelli and therefore some particularly salient insights to offer about a racer’s career and career choices. He is right in saying “. . . Parnelli left a lot on the table when he decided to back down his schedule. He had so much more to give as a driver . . .” and he is also right in bemoaning each man’s frightful lack of luck when they most needed and, having worked for it, deserved it.

While Bourcier’s chapter introductions refer four times to “writer Bill Libby” it is nowhere actually spelled out that Libby wrote the really rather good 1969 book Parnelli, A Story of Auto Racing (ISBN 978-0525175810) which gives a good account of motorsports at Parnelli’s time.

Many of the photos are from Parnelli’s own collection and probably new to the record. A stand-alone 8-page color section floats towards the back. A list of major 1956–73 race wins is appended (doesn’t show car or team). The Index lists only people and venues/organizers, with one exception: the movie in which Parnelli made a cameo appearance. Don’t know which one that is? Read the book!

As a Matter of Fact, I Am Parnelli Jones

by Parnelli Jones with Bones Bourcier

Vitesse~Élégance: French Expression of Flight and Motion »
« Barbie™ i can be™ President