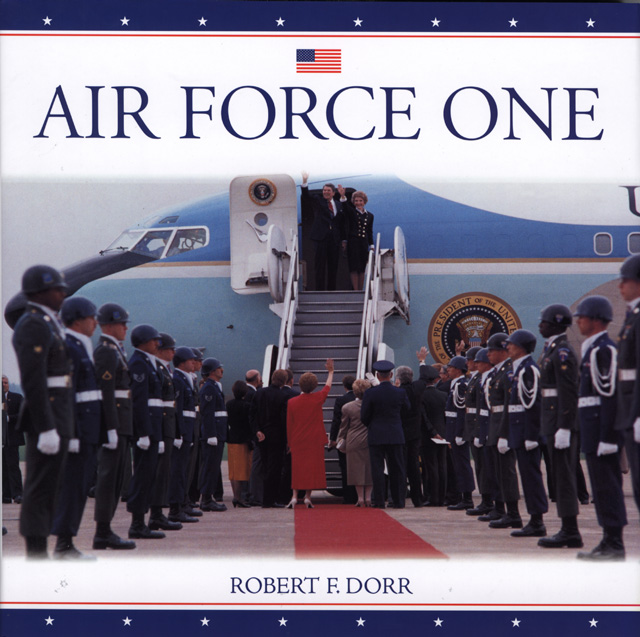 Published a year after the 9/11 terrorist attacks on the United States that represented the severest test yet of America’s emergency preparedness system—including the role of the Flying White House as presidential transport and in assuring the survival of the National Command Authority as well as that of the successors to the presidency—this book offers a comprehensive look at the purpose and history of transporting the Chief Executive and Commander in Chief by air.

The distinction of being the first presidents to strap on an airplane falls to the two Roosevelts: Theodore R. was already out of office in 1910 (serving 1901–1909) but still his usual adventuresome self when pilot Arch Hoxsey invited him for a ride in his rickety Wright Type B biplane. It would be more than 30 years later before a sitting president, FDR in 1943, would make the first official presidential airplane trip, in a suitably imposing Boeing 314 Clipper to meet Churchill in Casablanca.

Aircraft historian Dorr (Air Force 1957–60, Foreign Service 1964–89) not only has 70 books about military aircraft under his belt, he accompanied SAM 27000, the plane that carried every US president since 1972, on its retirement flight a mere 60-odd hours before 9/11. Retired major Robert Mikesh, a leading authority on presidential aircraft, gives this book high marks and, along with many other insiders, contributed data and photos to it. Whether the reader’s interest lies with aviation or presidential history, Dorr presents enough depth to engage all, despite setting a brisk pace so as to cover some 60 years of activity. From airframe selection to the color of the wool upholstery and from mission profiles to post-flight scrubdown, everything that can be told is. There are, in fact, a few items that are rather on the fringes of what the planners are probably comfortable with disclosing. Case in point: the super-secret “Senex” program or the purpose of the three C-20C Gulfstreams the Air Force acquired in 1985 and whose very existence at best elicits a firm “No comment!” In the absence of official information Dorr himself call this coverage “informed speculation.”

There are, naturally, lots of security-related contemporary items that cannot be discussed, such as an aircraft’s defensive capabilities or the staggeringly complex logistics of staging presidential travel in terms of backups, decoys, contingencies, fuel and food integrity, use of airspace etc. The book begins and ends with the current aircraft, the VC-25 military version of the 747 Jumbo Jet. Dorr primes the reader’s imagination by first dwelling on its physical and philosophical place in the world: its gleaming appearance, the pride in a Zero Fail mission, its geopolitical impact. Other planes in the current primary and secondary fleet and their intended users are discussed before the focus turns to a chronological treatment of all aircraft used by presidents, from the only slightly modified civilian or military aircraft in the beginning to the purpose-built modern ones with special avionics, bulletproof glass, communication suites, and self-defense and in-flight refueling capability. Of course, the history of the “Air Force One” call sign is discussed (interestingly, even the principals are now unsure of its exact genesis); surely there will be readers who are going to be surprised to learn that while the Army One and Marine One monikers (there is no Navy One) do denote “[sitting] President on Board,” the Coast Guard marches to its own drummer: Coast Guard One is reserved for its boss, the Secretary of Transportation.

Excellent vintage and modern photos, all captioned and credited, accompany the thorough text. The aforementioned VC-25 is shown several times in the rarely seen “green” configuration during its ca. 1989/90 fitting-out pre-service phase, the green color being inherent in the metal’s alloy and a result of the anodizing process. Most of the detail interior shots are of that plane.

Dorr goes beyond merely presenting aircraft (including helicopters) and also discusses not-so-obvious items that demonstrate his clear grasp of the bigger picture, for instance, the impact the 89th Airlift Wing’s requirement for extended tours of duty has on personnel, its relation to the Air Force in general, and the public’s (read taxpayer’s) take on the purpose of presidential travel—and the costs associated with it. Interesting in every regard!

The book’s smart use of color and typography deserve mention. If there is a weakness it is that the multi-page “special features” are not visually distinctive enough from the flow of the main text and more often than not one will turn a page in mid-sentence only to stumble without noticing into a stand-alone, new element.

Technical specs are kept to a minimum, there are lots of anecdotes from personnel involved with the 89th; the Index is on the brief side but does call out each aircraft.