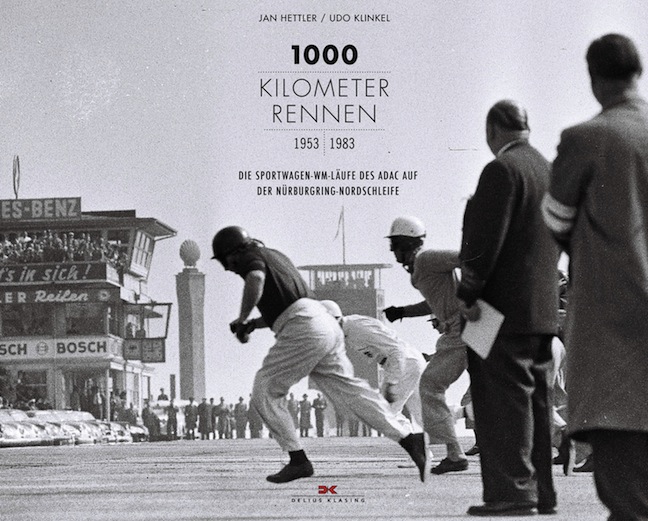 “At a certain point, giving up is no longer an option—we had to go on. But the initial pace proved unsustainable and so it took a few years longer to finish this book.”

(German) Except for the last part of the quote, that’s exactly what a long-distance race driver would say! Here, it applies to a book that in every regard represents an endurance event too, certainly to the writers but also the readers.

Unless you carry a can of spinach in your holster, just assume that you cannot handle this mighty book with one hand. Not even two will do to hold it open because it is landscape format (12 x 9.75″), 2″ thick, and weighs more than 8 lb.

Do these stats matter? Only if you believe that the stats of ‘Ring times used in modern-day automobile advertising and road tests matter. Behind closed doors, car makers know them for the marketing gimmick they are (not everybody runs the same distance or from/to the same points etc.) but why is the public so easily impressed with lap times on the famous northern loop?

By examining the famous track’s history, this mind-bogglingly thorough book offers answers, at least indirectly. But, a lament, to start: both authors have North American connections, and when the book was still just a vague plan hatched over a beer it was the English-speaking racing world that embraced it “most enthusiastically”—so why, oh why is there no English edition in the works? The book contains over 500 images, many of which new to the record, so even if you don’t read German there’s plenty to enjoy (also, the multitude of tables can be deciphered with little ambiguity) but the real meat is in the authoritative text. There are only a 1000 numbered copies so don’t remain on the fence too long.

It obviously took some planning how to squeeze this much detail onto “only” 744 pages but one of the casualties is type size. Readers old enough to have witnessed endurance racing at the Nürburgring during the period under consideration will also be old enough to have tired eyes, and let’s not even dwell on the microscopically small font for the photo captions, tabular matter, and the 41 reminiscences by racing drivers.

So, if eyesight and language skills check out, you are in for a serious treat—even if you can cite chapter and verse of the existing, voluminous ‘Ring literature. The level of magnification is extraordinary and the prose most engaging. Following an overview of the origins of endurance racing in Europe, and specifically the role of the Automobile Club of Germany (ADAC) the 30 racing seasons are each introduced with a quick summary and then explored in detail on some 20–25 pages that bring to life something that the Foreword by Hans Herrmann already alludes to: aside from all the other factors that have to come together to run a successful race, the driver had to have the right stuff to do well on this treacherous track.

From track layout to regulations, and team strategies to technical features of the vast variety of cars, everything is considered. Each season ends with sets of tables enumerating complete results (including non-starters and non-finishers) and relevant data such as car, team, class etc. The book was 10 years in the making and the tables probably consumed most of that time.

If there is a peculiarity it is that the drivers’ commentaries are not dated. Some are obviously dead, so when and to whom did they give these first-person accounts? There is no Index—and it would be absurd to expect one in this type of book.

This is not a book you read once and then put away; instead it will become a trusty reference source, even if you don’t—or can’t—actually read every single word in it in your lifetime. If there ever were to be an English version it would surely have a glorious future. June 2017 will be the track’s official 90th anniversary so this book is getting a good head start.

Batman Black and White »
« Telling America’s Story, A History of The Henry Ford