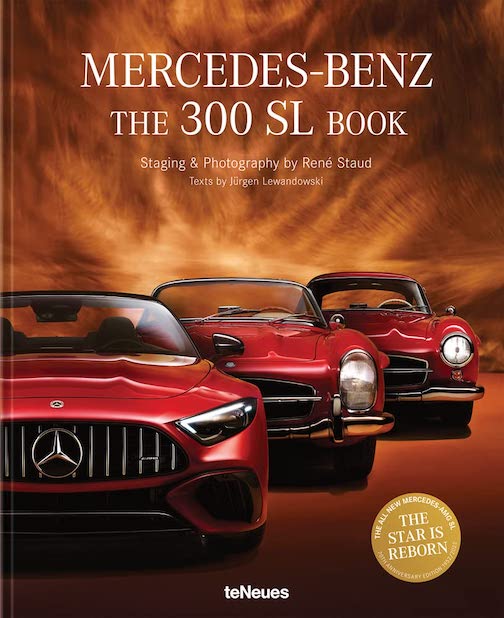 “Back to my love, to what is arguably the most famous SL, the 300 from the 1950s. In 1988, Mercedes-Benz Design commissioned me to photograph it for Bruno Sacco and Johann Tomforde, as a style and image concept study for the forthcoming model change from the 107 to the R129.

My general knowledge had taught me that there are significant differences between a coupé and a roadster. Yet during my numerous experiments to find the style of the image concept for the R129, I was able to discover and learn even more. This resulted in some unique images of the car’s progenitors, and some of the experimental photographs were used in the global communications for the R129. What remained were numerous images that were far too original to be consigned to the archives. As a result, I decided to produce a calendar: the now legendary 300 SL calendar, which has become the flagship for me and the photographic possibilities at Staud Studios Leonberg for 25 years in a row.”

(English, German, French) Did you notice there’s an “S” in the photographer’s name and an “L” in the city in which his studio is located? Coincidence, of course, but it’s just one more thing that tickles German photographer René Staud about the SL subject. 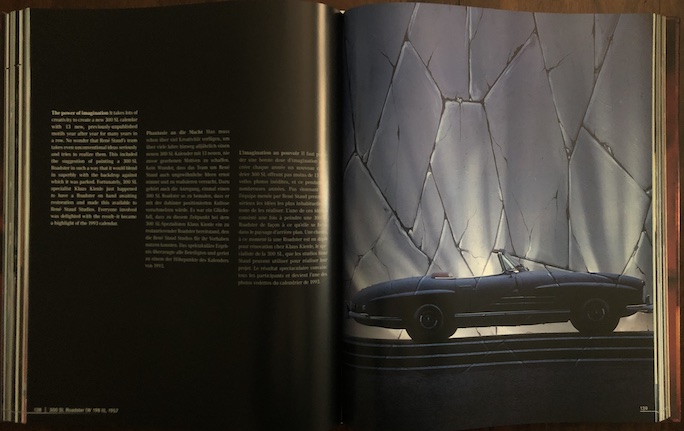 Observe how the cracks on the wall seamlessly extend over the car and then continue into the floor. Photoshop, you say. Nope, Staud’s people actually painted cracks on the car! (It was destined for a repaint anyway.) 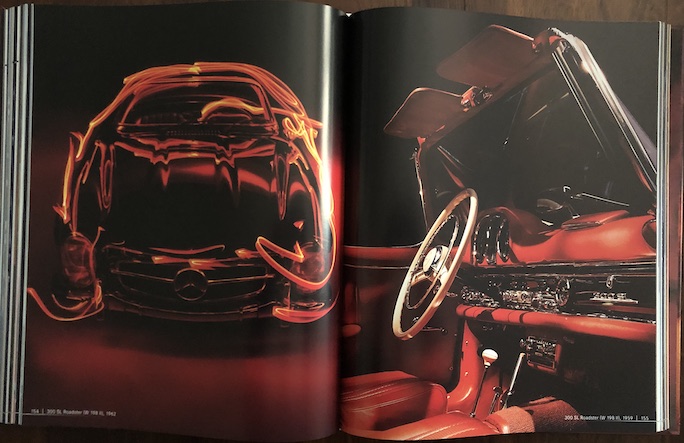 Art. This (l) is also not post-shoot Photoshop trickery.

Both the timeline in the quote above and the reference to a calendar are pertinent to this book, the former being a reminder just how little time it had taken the young Staud Studios to make a name for itself with its groundbreaking new tool, the Magicflash strobe light bank—half a meter wide and 9 m long—that creates 100% color-correct, controllable studio lighting. It allows large multi-dimensional objects to appear with sculptural plasticity, and not having it had relegated car shoots to the great outdoors. The studio is never idle, sometimes booked around the clock, and lots of car makers ship their cars to be photographed in a facility that has multiple creative spaces and image processing stations and even a cafeteria/bar and museum area. With a big staff, Staud (b. 1951) no longer needs to be actively involved in the day to day operation and thus has time to devote to his other projects—books, exhibitions, and lectures. Anyone interested in the workings of the studio is directed to the closing chapter of his 2019 book Neo Classics. 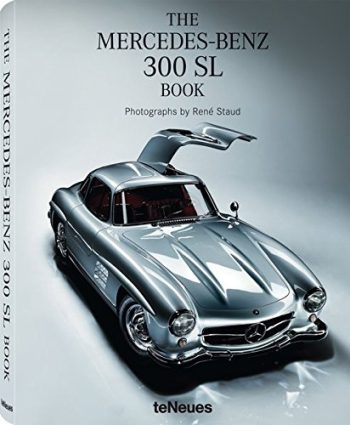 If you’re into car photo books there’s a good chance you are familiar with the innovative and distinctive work of René Staud. In fact, you may look at your bookcase and think you already have a book with the same title by the same author and the same publisher. Well, yes and no—there was a 2012 edition (ISBN 978-3832796426, no longer in print but Staud still has copies, at €300). Oddly, it was a few dozen pages longer than the current, expanded Revised 70 Years Anniversary Edition. The 2012 edition ended with the models that were then new, the R231 (2012–2020) whereas the new edition includes the R232 (aka AMG SL 55 and 63) that was unveiled in October 2021.

There are 125 individual cars showcased here, in chronological order by series. SL enthusiasts will probably not think for a moment that all SLs are created equal, and, in fact, the varying breadth of the coverage reflects that to some measure. Still, the whole family tree is here, down to the lowly (there, we said it) SLK. People who follow the comings and goings of the original SLs will surely recognize many of the cars. 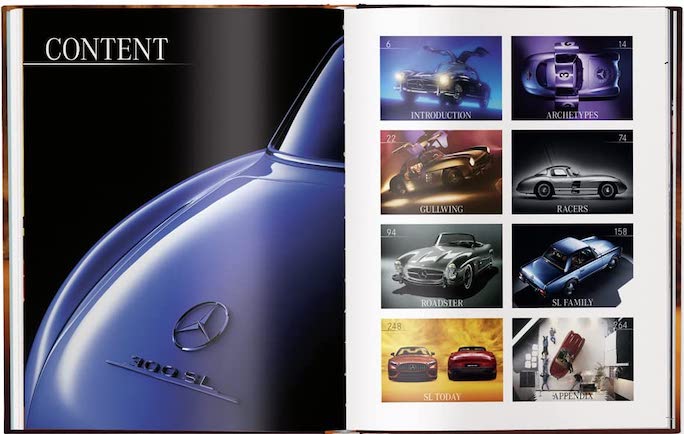 The Table of Contents isn’t nearly as detailed as the Specs page (below) at the end of the book which includes page numbers as well. Speaking of which, clap your eyes on the left page, center row, center image. The page numbers are given as 74–87, which would lead you to expect the next car begins on p. 88—but it’s 94. So, what is on pp 88–93?? That would be the 300 SLS. Was it dropped from this page because the designer didn’t want to mess up their dream layout?? 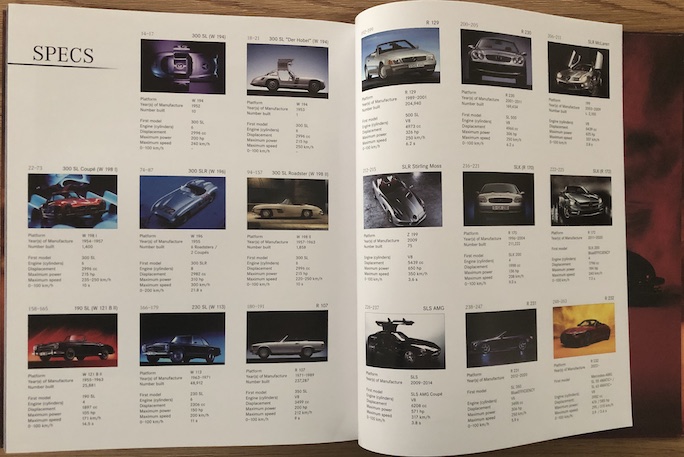 In typical teNeues fashion the book is big, 11 by almost 13.75 in, and produced to a high standard in terms of paper, printing, and purposeful design. Also typical for this publisher, it has a flat spine which means it cannot open fully flat so in the case of crossover images some detail will be lost in the gutter. The calendars obviously don’t have that problem and were also about 40% larger—but try finding a good place to store those! The calendar aspect also comes into play in regards to the amount of text deployed; it is minimal (written by well known and widely published German auto journalist Lewandowski, a frequent Staud collaborator), and intentionally so. The original book had been presented as “a love song to an exceptional car,” and photos, certainly Staud photos tend to serve that purpose better than words/stats/specs. Staud is surely the only photographer to have had some 500 SLs in the studio, and very certainly the only one to have been entrusted with one of the two 300 SLR Uhlenhaut Coupés, the model that will for a long time have the distinction of being the most expensive car ever sold at auction (€135 million, in 2021). Already back in 1989, when Staud did his first 300 SL calendar, he recognized the SLR as essential to the SL story—and, to say it once more, already then he had the professional clout for Mercedes to send him one to include in the calendar shoot. 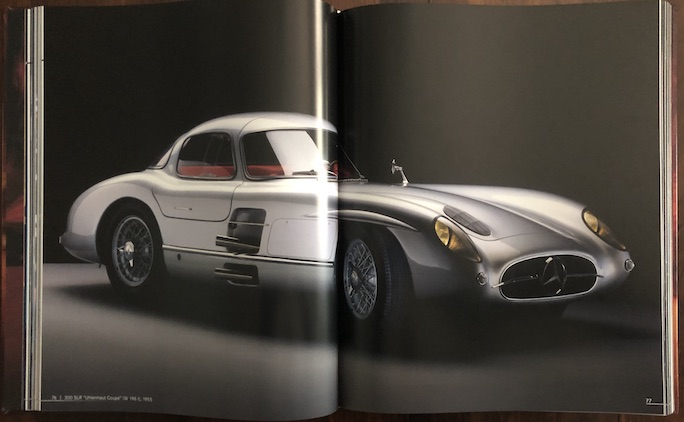 Flat spine victim. Such a shame since Staud is the only one so far to have had the opportunity to shoot an Uhlenhaut Coupé in the studio.

Long story short, Staud has a schooled eye, a keen mind, a wholly comprehensive and organic understanding of the SL series, and considers the SL the most extensive project of his entire career—if it’s words you need, look for them elsewhere and don’t fault this book for not delivering something that’s not in its brief. 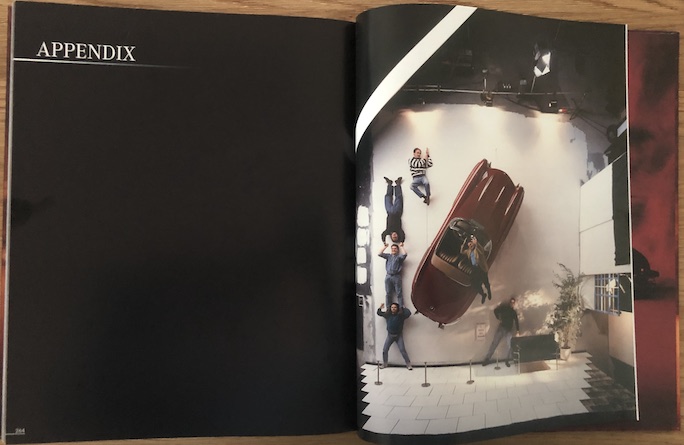 Which side up? This uncropped image makes it pretty easy to figure out but the final version, such as on the TOC (see above, bottom right), not so much. 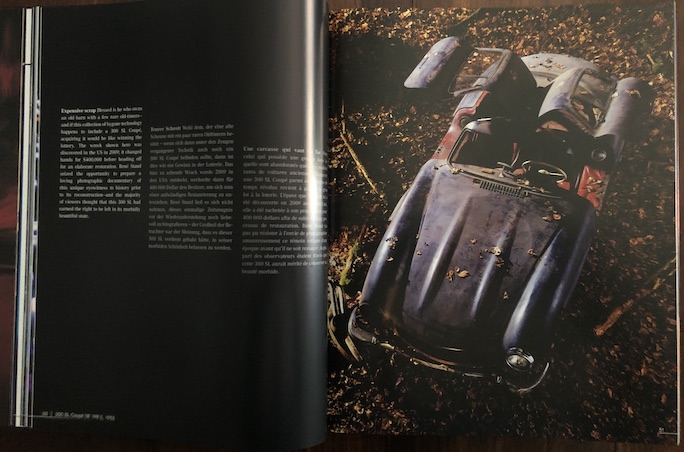 The caption alludes to this $400,000 barn find being headed for “an elaborate restoration.” Gullwing aficionados would know that HK Engineering is involved here, Hans Kleissl’s temple of all things 300 SL. Kleissl and Staud are almost the same age, started their businesses around the same time, and share the same fascination with the SL.
Notice the text on the verso page: each column is in a different language—but also in a different color (or percentage of grey) reversing out of the black background, French, on the right, being the palest. This works sort of fine on a white background but on black it is just a bad idea. That the black is not remotely fingerprint-friendly, well, that’s a whole other can of worms. (If you intend this book as a gift you don’t want to thumb through it first!)

As an aside, large-size prints are available from Staud Studios. Two of his images, “Form Follows Function” (a 300 SL photographed in 2009) and “All Time Hero” (the Uhlenhaut 300 SLR) were part of a benefit auction in 2022 to promote young photographers and support them in their artistic development. Print folk will geek out over the fact that they were done in a process called UV direct printing in which the ink doesn’t penetrate the material (which can be paper, glass, acrylic etc.) but lies as a very fine layer on the surface and is hardened with ultraviolet light.