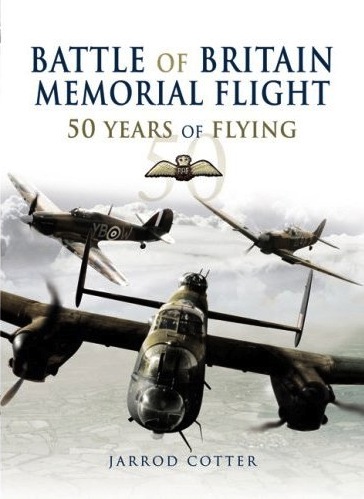 Published, as you might gather from the subtitle, on the occasion of the Flight’s golden anniversary, in 2007, this book is the first full account of the origins and activities of an organization (technically, it is a unit in the RAF) that is dear and near to the British, a veritable cultural touchstone. Some six million spectators witness the over 700 annual appearances nowadays of the Flight’s historic planes at commemorative, promotional, and inspirational events. From the Queen Mother’s funeral to a fly-past at a local fair, the BBMF planes move the soul and evoke memories of things that ought not be forgotten. The Flight’s motto, “Lest we Forget,” has bestirred people since Rudyard Kipling popularized it in the refrain of his 1897 poem Recessional that spoke to both the glory and the hubris of Empire. And those that must not be forgotten are “The Few,” whom every Briton knows to be the ones in British Prime Minister Winston Churchill’s immortal words directed at the House of Commons on August 20, 1940 at the height of the Battle of Britain: “Never in the field of human conflict was so much owed by so many to so few.”

The author, an RAF man himself (and nowadays Deputy Editor of Fly Past magazine) has had an interest in the BBMF since the 1980s. From spectating at the fence of RAF Coningsby, the Flight’s home base since 1976, he has moved up to being allowed to fly with them. Partly his previous book, Living Lancasters, Keeping the Legend Alive (2005), opened doors and the BBMF has fully embraced and supported his work. In fact, the current CO (or OC in British parlance) wrote the Foreword. In it he freely admits to the Flight’s archives being “voluminous but also completely disorganized” and it is only after having begun work on this book that the author, who thought himself well informed about the BBMF, realized how little he did know and how little organized information there existed.

Based on interviews, log books, memoirs, and private [re]collections, Stevens pieces together a story that is largely the result of one man’s vision, its founder Group Captain Peter Douglas Thompson DFC. Born 1920 he abandoned his training as a Chartered Accountant to heed the call and join the armed forces in 1938. As a Hurricane/Spitfire pilot he himself was one of The Few and the losses he witnessed plagued him until, in 1956, as Station Commander of RAF Biggin Hill, he realized that the wider public mourned as he did. And a way to commemorate the losses, honor the sacrifices, and renew the commitment to uphold liberty was to spruce up the iconic warbirds and put them into the air at opportune moments for all to see. The first chapter of the book is fittingly about Thompson, a low-key man who never spoke much of the war and whose only recorded thoughts about the BBMF, originally called Historic Aircraft Flight, are in the introduction, reproduced here in toto, that he wrote for the Flight’s 1999 annual brochure. Stevens feels a proper appreciation of the man is long overdue and much of what he is able to say about him is thanks to insights provided by Thompson’s wife Mimi.

After summarizing the tactical situation in 1940 and the outbreak of the Battle of Britain (with a useful sidebar on how the immensely important Plotting Room worked), the book relates the Flight’s origins and intentions, logistical issues (finding the planes, refurbishment, maintenance, spares, funding etc.), and describes its various activities up to 2007. The second half covers by type the principal airplanes: Hurricane, Spitfire, Lancaster, DC 3, Chipmunk (the Flight operates 11 different craft) and documents specific planes’ wartime and BBMF history as well as the constantly changing paint schemes (so as to honor specific squadrons or even individuals). The 1969 movie Battle of Britain, in which the Flight’s aircraft participated, is credited with reviving interest in warbirds. Specific commemorative fly-pasts—such as VE and VJ Day celebrations, the Queen Mother’s funeral, or National Commemoration Day (July 10, midway between VE and VJ Day)—are described in detail.

Throughout, the book is well illustrated with period and modern-day photos. Several memos and directives are reproduced as well, and five standard aerial display flight routines are diagrammed. There is no specific restoration coverage provided but Spitfire TE311, the Flight’s sixth Spit and newest acquisition, is shown in various stages of work. Appended is a list of COs since 1977 when that appointment was created; and information about the Visitor Centre, the BBMF Association that was founded in 2007, the Royal Air Force Benevolent Fund that since 1919 seeks “to provide relief of distress among the RAF family” and which will receive a portion of the proceeds from the sale of this book, and lastly a brief account of the post-BBMF career of four particular aircraft. Bibliography; Index.

Far-called our navies melt away
On dune and headland sinks the fire
Lo, all our pomp of yesterday
Is one with Nineveh and Tyre!
Judge of the Nations, spare us yet,
Lest we forget—lest we forget!
— Recessional by Rudyard Kipling