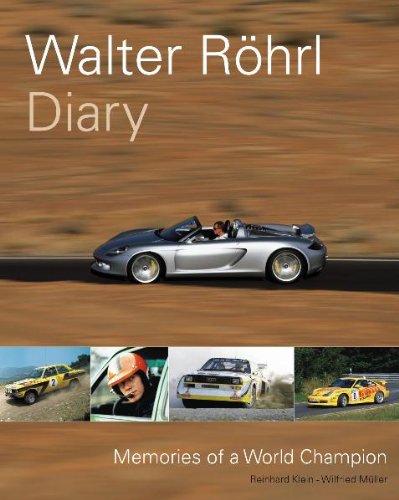 “I didn’t really know why I was so fast and it didn’t really interest me.” Not exactly the words one would expect from the 1980 and 1982 World Rally Champion, a veritable legend in his field who was voted by his peers Driver of the Millennium (2000)—Röhrl himself picked Timo Makinen—and Best Rally Driver of All Time by 100 of the world’s motorsports experts. Another thing you wouldn’t expect to hear him say is “I have not seen 95% of them [the photos in this book] myself, simply amazing!” This is thanks to the vast archive German rally photographer and publisher Reinhard Klein began to amass 25 years ago and from which many of the photos in this book stem. Most of them have indeed not been published before.

This book is the English version of Röhrl’s German book Aufschrieb (which was in its 2nd edition but is sold out already). With the help of co-author Müller he presents a first-person account of his almost accidental start and initial disinterest in the sport, his life in professional racing and now testing/development (for Porsche), his relationships with colleagues and competitors, and his thoughts about racing and life in general.

Readers who are not yet acquainted with Röhrl should know that he had a legendary reputation for being moody, difficult, not giving any quarter, and saying pretty much exactly what was on his mind—often enough to his own detriment. This edginess is certainly evident in the book but there is also a surprisingly candid self-awareness of his challenging people skills. Lest anyone think that a book that is biographical if not autobiographical could not possibly be an accurate portrayal of the man there are also 10 essays by friend and foe that shine an outside light on his life. These essays, incidentally, are accompanied by 10 paintings in color of rally scenes by the German artist Georg Baumhakl, an accomplished landscape, portrait, animal, and motorsports artist.

Röhrl was a force of nature, frustrating fellow drivers who had to work at their craft by being good right out of the gate, seemingly—and in the beginning literally—without even trying. He was fast because he was smooth, and he was smooth because he was a skier at heart and drove a car with the same situational awareness he brought to skiing.

The highs and lows, the daily grind, the traveling, the time away from home, the stress of being cooped up in a hot car for hours with a navigator who gets on your nerves, the friction between being famous and wanting to keep a low profile, the satisfaction in being good at what one does—it’s all here. Year by year, from the first rally in 1968 to his current job as test driver for Porsche (if you like your Carrera GT’s handling, here’s the man to thank for it) the book describes in much more detail than the title “Diary” would imply Röhrl’s experiences.

This being a “Klein book” the photos are a key ingredient in the story. Klein, it should be noted, took up publishing out of despair over no one else making the sort of fine books he himself was looking for. All the books that bear his imprint so far are top-notch in terms of paper, typesetting, design, and typography. The photos in this book come from a variety of sources and range from basic reportage-type documentary photo to all-out art you’ll want to hang on the wall. (DON’T tear up the book; you can buy photos on his website!) From crashing into snow banks to hoisting a beer with friends, the photos leave no facet of Röhrl’s professional life unexamined.

Eight pages of statistics present data of the main events in which Röhrl participated. Signed copies are available from the publisher.

Paul Frère, My Life Full of Cars: Behind the Wheel with the World’s Top Motoring Journalist »
« The Horten Brothers and Their All-Wing Aircraft