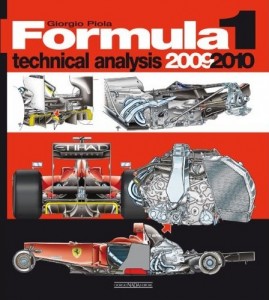 You may watch every race of the season (I do! And practice. And quali. And the recap.) and faithfully snip every technical article in specialist magazines (I do!), and you may even have contacts in the F1 community (I do!)—and you (and I) still wouldn’t know all the technical intricacies this book series has been able to clarify since its launch in 1994. Not only that, the convenience of having it all between two covers and the benefits of having it all explained in context are unmatched.

It is no exaggeration to say that Formula 1 is the most expensive sport in the world. Intensely technology-driven, it requires staggering investments in order to have a shot at the equally staggering purses (in terms of prize money, sponsorship, and road car marketplace cachet). Even if you can afford to be one of the biggest spenders, success is elusive. Witness Honda—whose kitty of over $250 million was one of the largest on the grid—withdrawing from the sport after 44 years of participation when all that money could not get them a better finish than ninth in 2008 and, to add insult to injury, instead the team that rose from its ashes, Brawn GP, in its first year on the grid did the unthinkable and the unprecedented: snagging both the Drivers and the Constructors Championships.

If you did follow the 2009 season you already know that Brawn’s dominance was inextricably linked to a liberal interpretation of that year’s FIA regulations, specifically in regard to the rear diffuser. Brawn’s and two other teams’ technical solutions ultimately (and, insiders would say, surprisingly) were sanctioned by the FIA—but just this one issue illustrates the implications of fully understanding the technology. And this book will do just that. Even if racing leaves you cold, the 2009 season saw the use of a technology that has direct application to your everyday road car: KERS, Kinetic Energy Recovery System (explained here in detail).

The single most important aspect to grasp about this utterly unique type of book is that it uses hundreds of fantastically detailed technical illustrations, cutaways, and exploded views to explain the technology. Anyone with a general interest in how things work and anyone who appreciates the art of illustration will be impressed with a book like this, but it is the reader with really serious technical interests who will get the most out of it. Don’t, however, expect of this book to be an engineering treatise; it is a very detailed, general-interest-level, graphics-driven approach of explaining in simple words and a minimum of jargon and math very complex technical matters.

Having followed F1 since 1969, Piola (b. 1948) has over 600 GPs under his belt, mostly as a professional commentator for magazines and TV. A trained engineer who has drawn F1 cars since his teenage days, he was one of, if not the, first journalist to produce professional technical drawings, with his work regularly appearing in Autosprint and Sport Auto. Importantly for the type of work shown here, he worked as the Shadow F1 team’s interpreter in technical meetings. His studio has done over 4000 illustrations by now; the ones in this and the previous books are nothing short of exceptional in clarity and realism.

Beginning in 2002 these books started to cover two seasons, but only the first one in full and the second quite briefly. In this book all of 10 pages are devoted to a basic overview of 2010, compared to the 110 pages of in-depth 2009 treatment. The season is introduced by a recap of the general lay of the land in regards to teams/circuits and relevant changes to the sporting regulations. One car from each team is shown in profile, allowing unhurried comparison of the bodywork (anyone who says F1 cars all look the same is clearly uninformed). This is followed by graphs showing the race-by-race use of all the chassis (including spares) by certain teams (Ferrari, BMW, Red Bull), and grid-wide chassis stats and specs. Illustrated descriptions of engines, regulations, tires/brakes, steering wheels, suspensions, and rear diffusers present the different solutions for comparison; the text for some of these sections is by specialist writers. Key teams are then examined in detail, one by one and race by race, thus documenting both ongoing development and specific setups for specific circuits. If you did watch the races, and had the foresight to record them, you could now watch them again but, enlightened by the drawings in this book, with a much greater level of understanding.

The book offers a splendid way to see the inner workings of truly sophisticated engineering. Among the piles of racing annuals there is no other like it. Some of the more recent editions are still easily found (the publisher has them in print back to 2001) but be prepared to part with serious money if you want to assemble the full set!