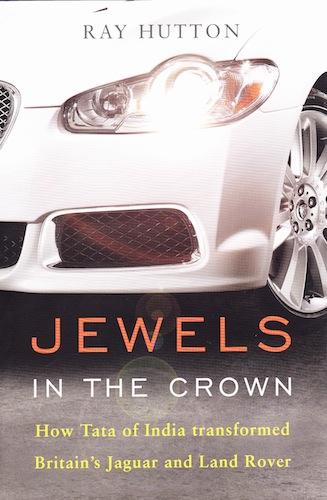 “Ford couldn’t wait to dispose of JLR, viewing it as a drain on resources that didn’t fit within its enforced austerity strategy. Then, almost immediately, Tata was faced with the western world’s worst economic crash of modern times and had to raise emergency funds to keep JLR afloat.”

When the quintessential British carmaker Rolls-Royce was sold to a foreign buyer (the Rolls-Royce portion to BMW, the Bentley portion to VW) in 1998, many pundits predicted doom and gloom. It didn’t happen. Five years ago, in 2008, two other storied British brands “fell” into foreign hands.

I have often wondered how a car company, relatively unknown outside of India, could become the “Preferred Bidder” for Jaguar/Land Rover (JLR). For Tata to purchase both companies from Ford, and in a relatively short period of time turn them both around—Jaguar into profitability and Land Rover to even greater success than before—is even more remarkable. Author Ray Hutton, an award-winning member of the Guild of Motoring Writers, has been writing about the car scene for 35 years and has interviewed almost every person who has been involved in this amazing purchase and transformation. Each of the important people involved have their own short but useful biography at the back of the book.

The book has background chapters on both the history of Jaguar back to the Sir William Lyons days, and the history of Land Rover. Hutton described both companies as “the jewels in the crown of the British motor industry.”  In his Introduction he says “That crown was somewhat tarnished. There had been several decades of decline in car manufacturing in the UK. Jaguar which had made the most sought-after sports cars in the world and proved their worth by winning the Le Mans 24 hour race year after year, had fallen behind the times and wasn’t engaging with the new audience for premium cars. Land Rover was known for making the best four-wheel drive vehicles but was threatened by a campaigns to make the big, heavy,  sport utility vehicles (SUVs) socially unacceptable. And both Jaguar and Land Rover had patchy reputations for reliability.”

To understand why Ford needed to divest itself of Jaguar and Land Rover you have to understand the background to Ford, and this is well explained. To sell Jaguar, Ford had to add a carrot, and that was Land Rover. The author has met and interviewed Ratan Tata, who was personally involved in the deal, a number of times and so gives us a picture of the Tata group which has been selling their cars very successfully in India, but not many abroad. Perhaps the Tata name is best known for their take-over of Corus, previously British Steel.  At the time of the Tata purchase their company owned 18 companies in the UK, including Corus and Tetley Tea!

Was the secret simply good management? The author says, “Tata was true to its principles, appoint a manager and allow him to get on with the job with minimum interference.”  At first JLR was directed by a three-man board. “Tata brought a new approach to JLR, now the fastest-growing premium car company in the world: improving factory efficiency, embarking on major export drives, and launching several successful new models.” This book shows how it was done.

Jewels in the Crown

How Tata of India Transformed Britain’s Jaguar and Land Rover