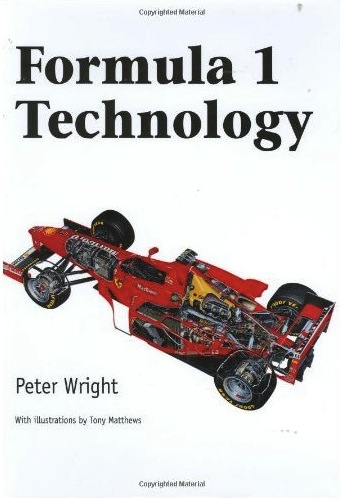 “The way a racecar works is nearly understood, but pockets of complexity remain and the computer models have not yet unraveled their inner workings.”

If you only read, and internalized, the Introduction to this book you’d be getting your money’s worth right there! Wright gives a sweeping yet nuanced summary of how things connect, not just in the mechanistic but also the metaphysical sense: cf. under what conditions do inventions take place? If something is shown to “work,” does it necessarily get accepted? How did racecars get to be so powerful that today’s prime directive to the engineer is to make them slower? The answers only seem to be slap-your-forehead obvious—you’ll want to take your time pondering these Big Issues.

Now, this book is already 10 years old. Why should you be interested in reading it still today? Consider:

Item 2 is particularly salient, especially to the reader who only has a passing acquaintance with racing because it is unintuitive. Looked at in a vacuum and strictly in engineering terms, today’s racecars could easily exceed the boundaries of the current performance envelope—but they’re not meant to. “Faster, faster!” is not the Holy Grail in racing. Surprised? Read the book!

When it first came out, the book looked back more than forwards. Beginning with, roughly, the 1950s, it sought to explain the state of the art in its day by examining the systems and philosophies that led to it. The state of the art has advanced since—one season in racing is an eternity elsewhere—but what was of relevance to know in 2001 is of no less relevance today. In many ways the older car “systems” are much more relatable because they involved actual mechanical components you could handle and understand because of fundamental similarities to everyday garage-tech. Today’s ubiquitous nano chips and black boxes are much harder to grasp. Their inner workings may not be observable but they still act on, and must obey, the same fundamental laws of the universe.

Long story short, in explaining how and why things worked in the past you’ll get a better appreciation for how the cars themselves and the regulatory parameters that govern their operation came about. Wright is singularly qualified to speak to both areas because he was an actual hands-on F1 engineer and later worked on the FIA end on technical and safety issues. A freshly minted mechanical sciences MA he joined BRM in 1967 as a chassis and aerodynamics researcher, worked with composites, aerodynamics and control systems, and put in 21 years at Lotus first as managing director of Lotus Engineering and then technical director of Team Lotus. From boats to ultralight aircraft to, yes, flying saucers, Wright has applied his fertile mind to many things. As an engineer’s engineer he could easily have written this tech-heavy tome in a way that would lose the lay reader; it is to his great credit that he didn’t. You do have to put on your thinking cap—there’s formulae, calculations, graphs, science aplenty. If you are not a practitioner and want to skip certain bits here and there, you’ll still get the big picture, and be the better for it. For instance, you may not care whether an air pump should be rotary or reciprocating but a few sentences later there will be a fundamental discussion of what makes a piston engine different from a gas turbine which anyone who can read English will be able to follow.

The book does much more than merely concern itself with car components proper: track safety (barriers, arrestors), driver safety (HANS device), a brief section on “banned technologies,” simulation/testing, and even a description of what a race engineer does on race day. There are quite a few technical drawings, many courtesy of master illustrator Tony Matthews. It should be taken as an indication of the esteem in which the Wright/Matthews team is held that Ferrari granted them unprecedented access when they wrote the excellent book Ferrari Formula 1: Under the Skin of the Championship-Winning F1-2000. In either book, even deep access is a finite matter: specific technologies and operating principles can be described only up to the point after which they become proprietary “trade secrets.” But, this level of micro detail would really only be important to the reader who is probably an industry insider already. Not much can be said about the photos—all b/w, many on the small side, all rather pale—except that they serve their purpose.

The last chapter looks at was then the future and is now the past. Prefaced by physicist Niels Bohr’s immortal words “Prediction is very difficult, especially about the future” it is interesting to see how much, much more has changed than Wright could have foreseen.

Appendices take up almost one third of the book, beginning with a discussion of ground effect (“something for nothing” as Colin Chapman called it) that moves from the flight of swans to the aerodynamic characteristics of a sphere to side skirts to diffusers. (Next time you catch an F1 race on TV you’ll be surprised at how much more sense everything makes!) Other appendices cover carbon fiber and active suspension; there’s even a 70-page facsimile of the 2001 FIA Technical Regulations. References, a good Index, and an author’s bio round out the book.

Then-FIA president Max Mosley says in the Foreword that this book is the “first systematic explanation of the technical side” and recommends it as “essential reading.” Consider this a Master Class in racing tech—for a paltry $50!

Motor Movies – The Posters! »
« Fall of Eagles, Airmen of World War One