Building the B-17 Flying Fortress 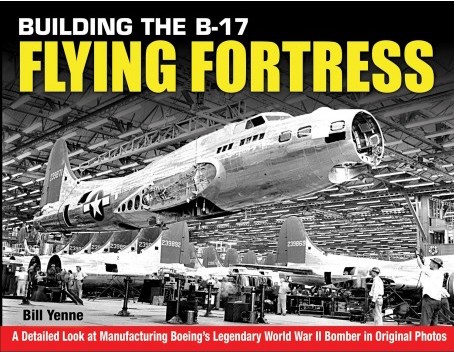 “I have found my focusing upon the Flying Fortress to be an amazing experience. Looking at the combat history of the Flying Fortress and the individual stories of those 12,731 distinct airplanes is truly breathtaking. Likewise was the experience of looking at the production history of those aircraft. The scope is hard to grasp. It is like trying to wrap your mind around counting stars in the sky or grains of sand at the beach. Yet, they were not grains of sand. They were complex mechanisms containing numerous complex submechanisms—and they were a moving target because they and their subcomponents were constantly and quickly changing and evolving.”

Well-trodden ground, you think. Been there/done that, you think. Turns out, there is more to be said and, especially, shown. While the operational and engineering histories are indeed plentiful, the actual bolting together of the apparatus on the shop floor had not yet been exhaustively documented.

It’s been 10 years since the last installment in the “Building the xyz” series and this new book continues in the same format, and, amazingly, at the same low price. If you think in numbers this makes the new book an even better deal. And, if you think in numbers you will recognize the mind-boggling, unprecedented, and likely never to be repeated enormity of the B-17 program: more than 12,700 aircraft of the same type built at three different aircraft makers in a short time, utilizing a vast number of subcontractors building components to ever-changing specs and requirements. That it was wartime helped more than it hindered and in that regards, as Yenne addresses at several places in the book, this makes it “an amazing story among amazing stories.” If you are an MRP, a Master Resource Planner, this is just another day at the office but on anyone else the photos in this book will have an impressive and moving impact of what mountains men can move.

Rosy cheeks and lipstick—one of tens of thousands of Rosies shows how it’s done. The aviation sector took on more women during wartime than any other.

Speaking of men, wartime production means of course women—who hasn’t heard of Rosie the Riveter, that iconic figure especially in the the aviation and munitions industries? And who would have thunk that they were all so uncommonly well coiffed and manicured and quite improbably well turned out on the job? Well, they surely weren’t but these photos are from and by Boeing, meaning they are staged for effect.

Of the ca. 294,000 aircraft built for WW II, the B-17 doesn’t even crack the Top Ten of most-produced. Aside from its emphasis on production modalities this book does a properly good job of explaining the B-17’s virtues in the context of the doctrine of strategic airpower and the tactical lessons learned during WW I. A quick jaunt around the globe to look at early bombers brings us to that great American advocate of airpower, General Mitchell, who was not above calling the military establishment’s lack of vision incompetent and treasonable, getting himself court-martialed for insubordination in the process which in turn forced Congress to pass the Air Corps Act of 1926—without which there would be no B-17. While this is a much bigger story than this book can tell, even as brief talking points there is enough groundwork laid here to connect the dots in bomber development and also Boeing’s place as an industry giant.

The broad overview of why and how the A model evolved to the G almost imperceptibly shifts to a greater level of magnification as model-specific features, improvements, and manufacturing  / assembly factors (the Block System is of particular relevance here) are introduced. The A, B, C, D and E models were produced by Boeing which was then joined by Douglas and Vega for the F and G models in what became known as the BDV Committee, each company contributing one initial to that entity.

Hundreds of well-captioned photos and technical/cutaway drawings, mostly from Boeing, show everything from wiring looms to cockpit layout and de-icer boots to painting. One of the two Appendices correlates serial numbers to designations which makes for a handy reference when reading any other B-17 book.

Yenne has put forth many a fine aviation/aerospace book. That a half dozen of those are about the Flying Fortress is not least attributable to the spark lit by his dad working on the B-17 program. Making books that are small punch above their weight range is a special skill; Yenne has it.

Chapter 1: Setting the Stage for the Flying Fortress

Chapter 5: The B-17C and B-17D: The Transitional Variants

Chapter 6: The B-17E Brings Changes in Philosophy and Method

Chapter 7: The B-17F and Scaling Up for Production

Appendix I: Diagrams and Cutaway Drawings

Appendix II: All Flying Fortresses by Variant and Block

By the way, ch. 8 says it’s about the 17G but it also includes variants such as the F-9 photo recon models, Navy/Coast Guard-only variants, the USAAF 17H lifeboat version, and mentions a host of others.

Building the B-17 Flying Fortress: