Rivalry and Record-Breaking in the Golden Age of Steam 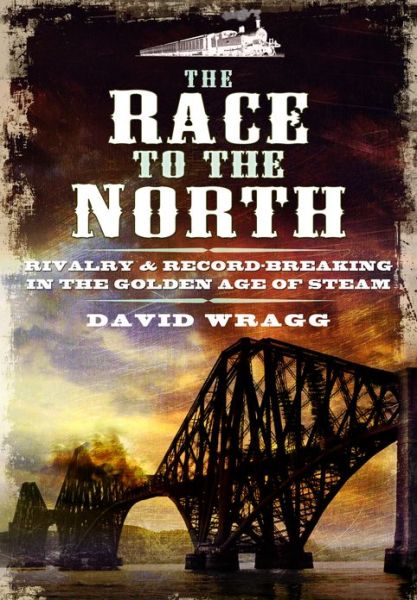 “The railways arrived on the scene at a time when few people made lengthy journeys, with most going no further than the nearest town. The Christmas card glamour of the long-distance stagecoach, or its rival the mail coach, first introduced in 1784, was in reality so harsh and bleak, as well as being expensive, that it was not to be undertaken lightly.”

Harsh and bleak indeed. Unless you are in the habit of thinking about the days of the horse-drawn carriage, almost everything on the first few pages of this book will come as a surprise—if not shock—to you. How far we have come since then!

A spirit of competition is present in most any endeavor mounted by humans, especially those of a business persuasion. Already the coach services competed against each other (shorter travel times, better service, lower fares, sexier horses) and so it is not surprising that the railways would too. But in a train loaded with a large number of passengers and traveling at relatively high rates of speed (a coach could do no better than 12 mph), a whole lot more can go wrong when things do go wrong. It is a hair-raising story, and well told here.

For the reader to better appreciate the logistics and also the geography, it would be advisable to have on hand at least a topographical map of the United Kingdom and better yet a railway map from 1830 onwards. All the book offers is one rudimentary b/w map showing dotted lines between London and Aberdeen and while this at least fixes the main talking points, it does not at all, especially for the non-UK reader, illustrate the key complications in getting from here to there by rail or even basic infrastructure considerations such as the location of seaports (to which to take rail passengers) or major market centers. However, author Wragg’s text does lay out the initially parochial, local nature of railway operators’ thinking which resulted in a multitude of short lines without any interest in tying together the length and breadth of a whole country. It would be up to a national body, the Board of Trade, to hatch the exotic plan of getting industry to consider offering one continuous track from London to Scotland.

Wragg is a solid railway historian with a number of praiseworthy titles to his name (also on naval topics), from staunch textbook and reference material such as an historical dictionary to lighter fare such as magazine articles. Reading his work, and certainly this particular book, is a joy—not least for his command of the English language. From human factors to economics to technology (the trains themselves but also track, bridges, and other infrastructure), Wragg paints a rich picture that anyone with an interest in the nature—and price—of progress will find relatable. That said, Wragg cannot possibly write about every little thing so it helps if the reader makes some mental adjustments on their own and factors in certain basic facts of life: making a steam loco go faster is not a matter of pushing the Warp Speed button harder but a couple of guys breaking their backs shoveling more and more and more coal. Even laying track and building bridges and pounding rivets are absolutely monumental obstacles, and properly appreciating this will add gravitas to this era of mobility.

While the book concerns itself mainly with the period of active “racing”—1888 and 1895—it follows the development of rail services into the modern age, especially in regards to consolidation in the industry, monopolies and, ultimately, nationalization.

The Bibliography offers “a good sample of books” the curious reader might want to consult for further exploration; and considering that this book contains a mere eight pages of photos there is indeed a whole lot more to explore. The Index is satisfyingly thorough.

Rivalry and Record-Breaking in the Golden Age of Steam

The Goldfinger Files  »
« Wave-Off! A History of LSOs and Ship-Board Landings