A True Story of Obsession, Faith, and the Pursuit of an Ancient Bible 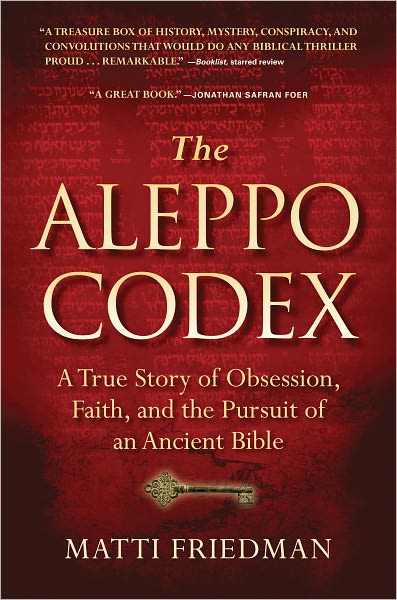 Over 1,000 years ago in Tiberias the scribe Shlomo Ben-Buya’a finished the last of 24 books that are jointly known today as the Crown. The Crown is accepted by Jews as the most perfect copy of the Hebrew Bible, and no duplicates were ever made. For 600 years the 500-page Crown lay in safekeeping in a synagogue in Aleppo, Syria. With the formation of Israel in 1947, and the subsequent upheaval in the Middle East, the Crown was eventually smuggled into Israel in 1957 to keep the priceless artifact safe from theft or destruction. Once in Israel, approximately 40% of the 500-page manuscript was discovered to be missing. Where it went, and who took it, is the subject of this excellent little book.

The author, Matti Friedman, grew up in Toronto, Canada, and now lives in Jerusalem. He is a professional reporter, in the past specializing in religion and archaeology. He currently writes for the Times of Israel. His book about tracking down the missing pages of the Crown reads like a spy novel, in part because some of the information sources for this book come from the Israeli spy network itself. However, it is not a spy novel, but a factual recounting of what is known about the disappearance of approximately 200 pages from the Crown. The final implications are disconcerting. In a country founded as a religious state, it is awkward to contemplate that a highly-placed employee of the state itself may be guilty of operating an antiquities-for-sale operation, robbing Israel’s religious heritage for reasons of ego and/or personal gain.

As Matti Friedman phrases it, “We might file this tale between Cain and Abel and the golden calf, parables about the many ways we fail: A volume that survived one thousand years of turbulent history was betrayed in our times by the people charged with guarding it. It fell victim to the instincts it was created to temper and was devoured by the creatures it was meant to save.”

Among those interviewed by the author are religious and community leaders from Aleppo, many of whom were dispersed around the world to such diverse places as Brazil, Japan, and Brooklyn. Rafi Sutton, a former Israeli Mossad agent, who was born in Aleppo and carried out his own investigation into the disappearance of much of the Crown, is interviewed extensively and provided the author with hints and glints of insight into the events leading up to and surrounding the mystery of the lost pages. Many people involved in the Israeli institutions tasked with gathering and protecting Jewish texts from around the world and held in Ben-Zvi’s institute, once headed by Meir Benayahu, are interviewed. Most interesting to me, however, are the interviews with the elusive and renowned artifact and manuscript collector Shlomo Moussaieff who claims to be able, in exchange for one million dollars, to produce the missing pages! Because I happen to own a small company that manufacturers archaeological hand tools, I have long known of the mysterious Moussaieff and his massive collection of unprovenanced seals and other trinkets from ancient times. Any descriptions of this elusive man’s conversations are always interesting and enlightening, even if they cannot always be taken as gospel.

The Aleppo Codex opens with a nod to Umberto Eco’s popular book The Name of the Rose, a fictional 14th-century murder mystery set in a monastery where a proper investigation is being blocked by the Church itself because of an ancient text in the library. In the end, as author Matti Friedman points out, “the human actions unleashed by the contents of the book have destroyed it and have burned the monastery to the ground.” An analogy, no doubt, to the sad fate of the invaluable and ancient Crown, and the machinations of the Israeli state to look the other way where justice is concerned.

Dramatis Personae (crucial for keeping the sometimes confusing cast of characters straight) is followed by an Introduction and 33 Chapters. After that, Acknowledgments, Notes on Sources, and Photo Credits. The surprising lack of an Index requires the reader to remember all the various players involved in the story, and where they appear in the text, a task not easily accomplished, at least by this reviewer. For an interesting two-part 30-minute audio interview with the author click here.

A True Story of Obsession, Faith, and the Pursuit of an Ancient Bible