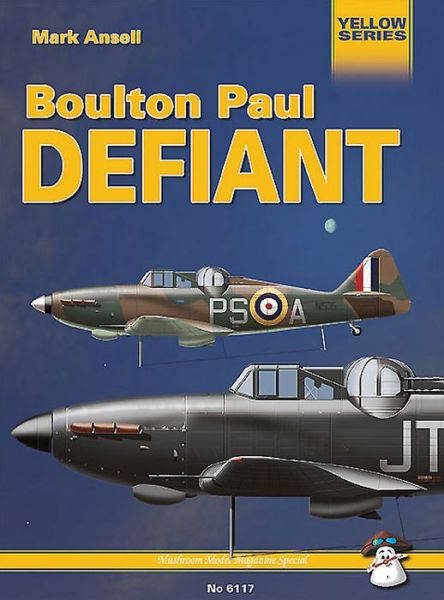 “With hindsight the Defiant is widely thought of as being a failure in daytime operations during the Battle of Britain. As a result it is often assumed that the design itself was flawed, which was not the case. It is important to realize that the air battles between May and September of 1940 were not of the kind expected by those planning the future aircraft requirements in the 1930s.”

Intended as a two-man “bomber destroyer” the Defiant was a competent if over-specialized machine. Even if you don’t know much about aircraft, with one look at the cover you’d notice two odd tings: a gun turret (how doesn’t he shoot his own tail off?) and masts sticking out at the bottom (how’s he going to land with those in the way?) In theory, there were answers to those questions but in practice the Defiant had peculiarities, and not just that its “pilots were recognizable by having an oily left flying boot.” 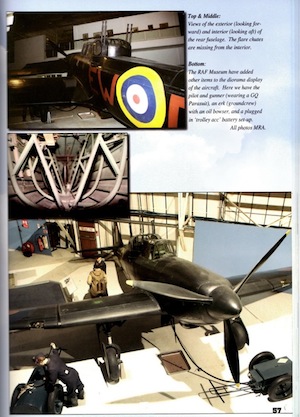 Only one completely original Defiant remains these days, at the RAF Museum in Hendon (right). It is extensively referenced in this book and at just about the time it was released, the Kent Battle of Britain Trust unveiled a faithful recreation built by volunteers of the Boulton Paul Association of which the author is a member. But that is not the reason for this book, which, rather, came out alreadyy ten years earlier (ISBN 83-89450-19-4) and just happens to be part of a widespread reprint undertaking by this publisher.

As all MMP books in this Yellow Series it is a thorough look at technical detail and model-to-model modifications with peripheral exploration of operational or in-depth development history. From an engineering point of view the Defiant is noteworthy for introducing tubular frame construction (as opposed to stressed skin) and having entire assemblies made separately in a modular manner that would later lend itself well to farming out production. 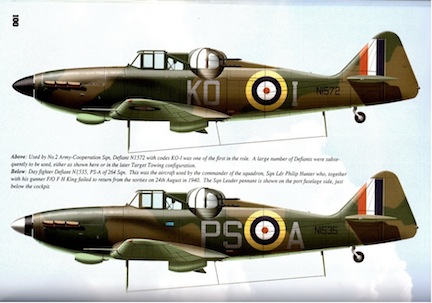 The aforementioned peculiarities, along with all other pertinent detail, are discussed. This book is particularly enlivened by pilot Colin Bryant’s first-hand experience (“If the gunner was killed it was supposed to be his last despairing action to turn the guns forward and elevate them 19 degrees. This cleared the prop and he could transfer the firing mechanism to the pilot by a switch. No one ever told me, however, how I was expected to aim them.”) Likewise the pilot, upon expiring, was supposed to lower the undercarriage and retract the radio mast lest the gunner would be impaled while trying to bail out the rear hatch. You can see this was one challenging aircraft! 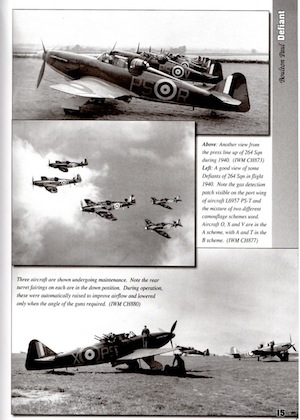 Modelers know that getting the complicated interplay of curves and bulges and flat planes on the Defiant just right is difficult (many kits are quite inadequate) so a number of the illustrations that make up a good 2/5ths of this book are offered with just that in mind (cf. cross section shapes). Some of the walk-around color photos, too, are intentionally over-lit so as to bring out rivet(ing) detail not otherwise visible on the nightfighter black of the survivor at Hendon.

As always, there are dozens of detailed 1/72 scale plans and multiple-view color drawings of all variants (including special equipment such as the external winch for towed targets for gunnery practice, or the wing-mounted dinghy for rescue service) and camo patterns (RAF, USAAF, Canadian, Polish. There could have been Belgian Defiants but the RAF couldn’t afford to spare production.) A few illustrations from the pilot’s or maintenance manuals are reproduced. Several tables of specs and lists of serial numbers.

1/48 scale plans are available as a separate booklet.