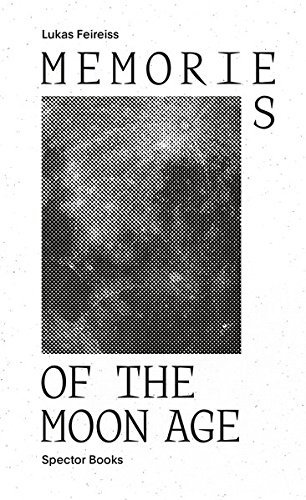 As author Lukas Feireiss tells us in his book’s Foreword, “Memories of the Moon Age explores space travel to the Moon as the ultimate flight of fancy for the human imagination. . . Since the dawn of time the Moon has been present in every culture.” As a result of the moon’s all-pervasive “being,” all cultures throughout time share this common influential thread, uniting mankind in time and space with a global curiosity of shared imagination about what the Moon could be, how to get there, and what would be found on its surface. In the distant past humans may have been unaware of each other on a global basis, yet unknowingly shared the Moon’s existence (“The Moon is the Oldest TV” page 138), and the psychological and physical impact of its timeless presence (“Eighth Continent” page 10).

Memories Of The Moon Age is composed of 300 images, each with a descriptive paragraph that documents a specific cultural reaction to the moon’s presence. Feireiss starts the reader off in the fourth century BC with an illustration of the ancient Greek philosopher Anaxagoras speculating that the moon is a round rock, and the sun is a hot rock. A woodcut carved in 1508 shows the connection being made in 200 BC by Hellenistic astronomer and philosopher Seleucus of Seleucia between the rise and fall of the tides and the physical position of the moon. 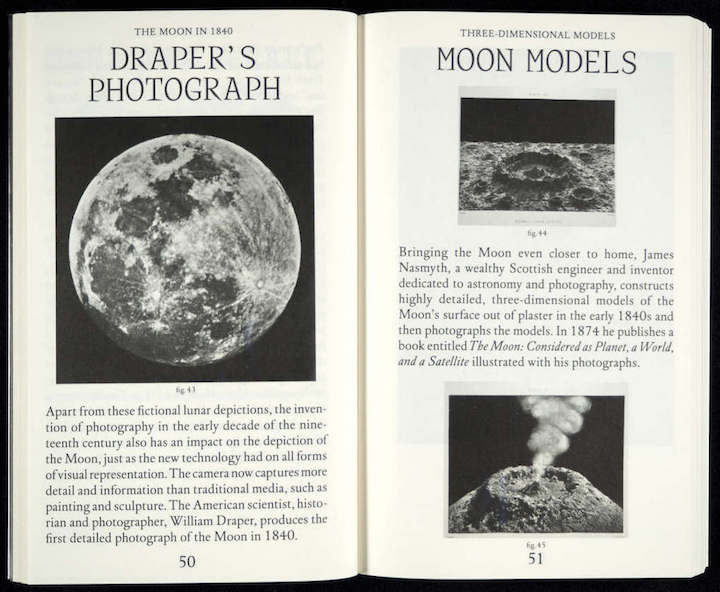 We learn that the first moon-based science fiction story was written about 200 AD by Lucian of Samosata, a Assyrian. In his story 50 Greek athletes take a sailing vessel to the moon and back. Later versions in other cultures and times use flying geese and dreams to make the passage possible. In 1656 Cyrano de Bergerac considers using rockets to make the trip, and in China Wan Hu attaches 47 rockets to a chair and blows himself up in an actual launch attempt. And so it goes, the illustrations wending their way chronologically through Jules Verne’s 1865 “From The Earth To The Moon,” and H.G. Wells’ 1901 “The First Men in the Moon,” to Kubrick’s movie “2001: A Space Odyssey,” and the actual moon landings, ending with contemporary artist Derlei’s apropos “Moon in My Hand.” 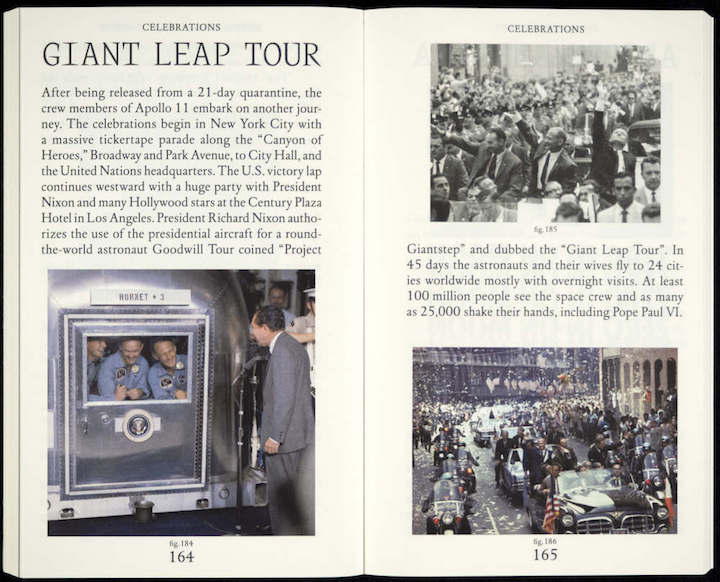 The book’s 300 illustrations (the book is small at only 4 3/8 x 7″) carry the concept of space flight through the shifts of cultural outlook over time up to the present day, when, after World War II, space travel changes from dream to reality, and then becomes a politicized competition between governments as the race to land a man on the moon is competitively linked to the “verification” of the superiority of one political/cultural system over another. The book then considers what the future links between human culture and the moon will be, and how architecture has been and will be influenced by space concepts.

Today, instead of the Moon being unattainable, it acts as a gray and sterile photographic foreground that displays Earth as a beautiful blue marble floating alone in the cold blackness of space. At this point R. Buckminister Fuller’s concept (“Spaceship Earth” page 148) portrays the earth as “a spaceship with a finite amount of resources that cannot be replenished,” the image becoming linked to a hoped for gradual global understanding of the ultimate “oneness” of humanity. By reaching for the moon, we are subconsciously reaching out to each other, because there is no place else to go. Everyone lives together on a single spinning ball floating through space, and everyone is unavoidably “in it, and of it.” 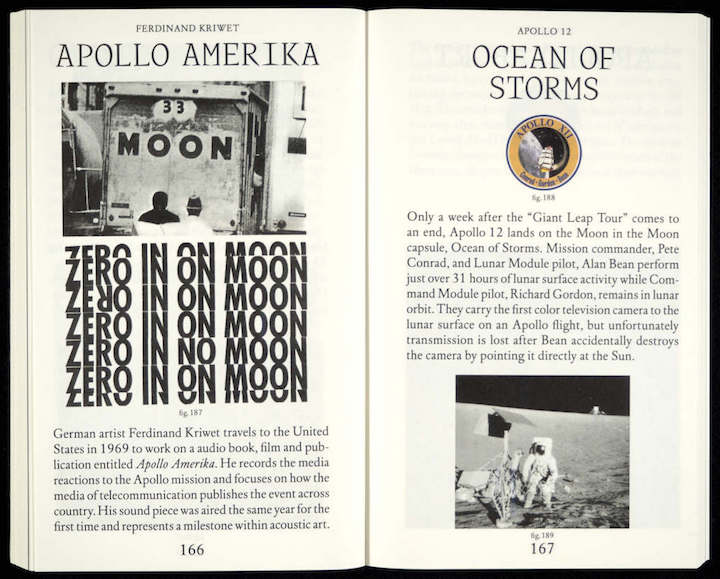 Feireiss lives in Germany and his studio has produced hundreds of visually communicative art works, exhibitions, publications, symposiums and exhibits, all with the underlying theme that ancient and contemporary culture reacts to specific aspects of physical and metaphysical inputs of all sorts. The moon’s influence on man since time immemorial is the topic of “Memories Of The Moon Age,” or as Feireiss puts it, this “book aims to cultivate a heightened sense of contemporary cultural reflexivity.” He has university degrees in Comparative Religious Studies, Philosophy and Ethnology, with a special focus on the constantly changing “relationship between architecture and other fields of knowledge.” He curates exhibitions and edits books, while teaching at universities worldwide.

For those of you with spiritual sensitivity, Feireiss has produced a moon-focused zeitgeist through time, putting on display the visual artifacts that helped define the moon’s influence on humanity from the past to the present.