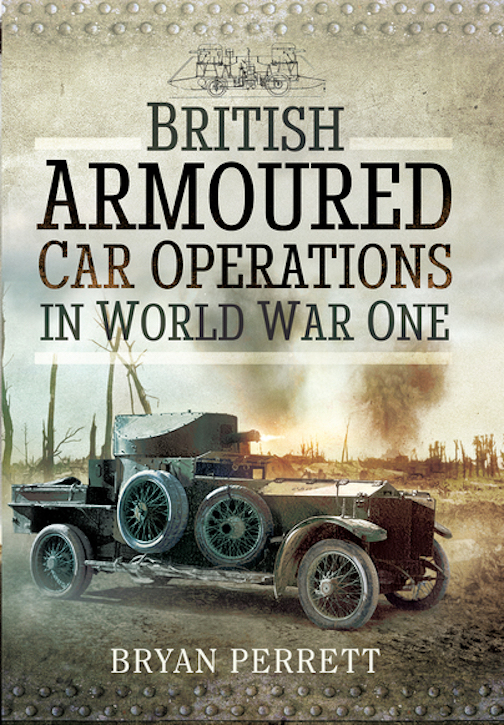 “The cavalry poured scorn on the idea that their work could be carried out by machines manned by rude mechanicals; and the artillery saw no role for them in its traditional methods of fighting. ‘Not our thing at all, old chap,’ was indeed the verdict of many generals discussing the idea in their clubs.”

World War I with all its bloodiness and horror was a paradox. On the one hand millions of men died on the Western Front and elsewhere using the old-fashioned infantry charge: the infamous “going over the top.” On the other hand it was the first mechanized armed conflict putting to use the modern vehicular technology of the day with aeroplanes and tanks featuring considerably in the field of operations. The car too, being liberated from being a rich man’s toy, at least in America, thanks to the mass-produced Model T Ford was also to play a key part in the conflict particularly in the Middle East and the Caucasus as this fascinating little book by Brian Perrett shows.

The book is written in a lively style and concentrates on the theaters of operations where the new armored cars where used, the tactics in how they were used, and also on some of the characters in command of the units and how they dealt with using these vehicles in armed combat for the first time. One learns that the very first units were the brainchild of Winston Churchill and were allocated to the Royal Navy rather than the Army. These first brigades were lead by wealthy men such as the Duke of Westminster and the publicity seeking MP Oliver Locker Lampson who were motoring enthusiasts in civilian life. With the Navy using the promise of NCO rank and higher salaries to lure talented drivers and mechanics away from the Army, experienced units were formed that were soon in combat on all fronts.

The arenas of combat that the book concentrates on are Northern Egypt, the Danube Delta, German South West Africa, Arabia, Palestine and Mesopotamia (now Southern Iraq). A highlight of the book for me is the coverage the operations in North Egypt where the vehicles, mainly Rolls-Royces, were used under the command of the Duke of Westminster in putting down a rebellion against the British by the Senussi tribe in Egypt. One particular incident that is entertainingly described is where the vehicles set out with a native guide with scant fuel reserves to rescue captured sailors who were being held by the Senussi deep in the North Western Egyptian Desert.

The exploits of Oliver Locker Lampson also make entertaining reading. A British MP from a wealthy industrial family (makers of the pneumatic tubes that featured in old department stores) who thought that joining the Navy and taking a brigade of armored cars to fight for Russian forces in the Caucasus would be a good way of gaining publicity for himself amongst his constituents back home. The book described in considerable detail the operations of Lampson’s forces both in the Caucasus and the Danube Delta. Of particular interest are the difficulties that the unit had in political terms with the coming of the Russian Revolution. Detailed accounts of the operations of General Allenby in Palestine and T.E. Lawrence in Arabia also make fascinating reading.

The book deals with failures as well, the most conspicuous being that of Major General Charles Townshend who lead a disastrous campaign in Mesopotamia in which the British were fighting to secure the vital oil reserves of the area. Townshend, an aloof and ambitious man who had little regard for his men, ordered his batman to get him a fresh change of clothes, a task that forced him to cross an open battle field several times.

These are just some of the highlights of the book that spring to mind when writing this review. Perrett, a military historian who himself served in the Royal Tank Regiment, is much more interested in the people and the tactics than the vehicles themselves. He allows himself to be drawn into very detailed commentary and narrative on the strategies involved in the various battles and raids he covers.

This makes very interesting general reading in itself but I can’t help feeling that he strays from his subject. This is because such narrative often extends to cavalry and infantry operations as well as that of the armored cars. I get the feeling that the material on armored cars was not enough in itself and Perrett felt that he needed to add a bit more. Either that or his fascination with general strategy gets the better of him. As a result, the book does not really exhaust the nature of the vehicles used as armored cars or their specification or manufacture and adaptation as much as I would have liked. One learns that Rolls-Royce, Peerless, FIAT, Ford, and Vauxhall were some of the marques used along with Leyland trucks but this is about all that the reader is told.

As far as the presentation of the book is concerned there is not much to find fault with, the book being up to the usual high standards of the publisher. It is hardbound and printed on good paper and the middle of the book has thirty-five high-quality b/w plates detailing scenes from the various theaters of operations covered in the book. There are also eight well produced maps at the beginning of the book which is s useful for locating the more geographically obscure places written about, particularly the Caucasus and the Danube Delta.

In all then, this is a very well written book with plenty of engaging material that will be a pleasure to read for anyone with an interest in the conceptual aspects of military history rather than detailed technical features of specific machinery.

Posted Under: Automobiles, British | Author: Matthew Bodycombe | No comments yet