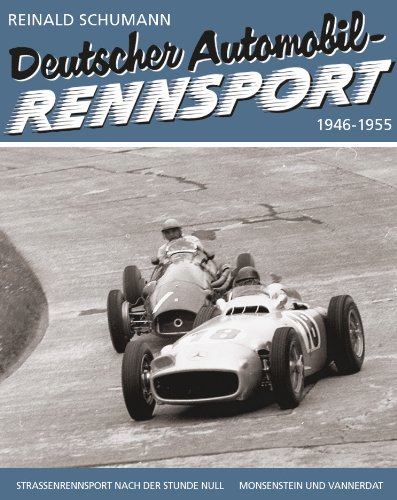 (German) There are so many photos in this book that even someone who doesn’t read German would get something out of it. Moreover, many of them are new to the record so that in and of itself is of interest. Also, the photo captions, many of which are short anyway, contain data points recognizable in any language such as names and car info etc.

But, first things first: don’t confuse this book with a very similar-sounding one by the same author in 1992, Motorsport in Deutschland 1945–1955 (ISBN 9783613014138). Schumann devotes quite a bit of space in his Preface to explaining that the 1992 book as published was not the book as written. In other words, his then publisher, concerned with the question of marketability and sales, imposed changes in the level of magnification over which the author had no control—the printed book turned out less thorough, less detailed, less everything than Schumann’s original manuscript had been. Even the catch-all title “Motorsport” was unsatisfactory as it gave no clue if both two- and four-wheeled activities would be considered and, without fail, readers who had hoped for motorcycle coverage were disappointed—and vocal!—about not finding any. Nor was there much data on German cars and drivers in races outside of Germany or of activities in the former East Germany.

All this is improved in the current book with a new publisher. The title is unambiguous in saying “automobiles” and “road racing.” Motorcycle road racing was given its own book, Motorrad-Straßenrennsport in Deutschland 1946–1955, which came out first (2011, ISBN 978-3-942153-05-8)—maybe to make up for the fact that motorcycles had been omitted from the 1992 book. It won the ADAC-Autobuchpreis award in 2012. So large a topic is this that a second volume covering 1951–56 (ISBN 978-3-942153-23-2) was published in 2015. More even than the award/s, the fact that the books are being published in this expanded format and are received with critical acclaim vindicates Schumann’s original but thwarted approach.

To anyone with an awareness of post-WW II motorsports, German marques and drivers and technical folk must rank prominently. To remind the reader just how precarious life at “Zero Hour” was, Schumann (b. 1931) begins by painting a picture of the utter destruction of this once highly industrialized and cultured nation, the lack of agreement among the Allies whether to offer Germans the means to rebuild (an approach strongly favored by the French but less, initially, by the Americans) or to punish them by withholding aid, and the day to day struggles which included—trivial in the larger scheme of things but relevant to the topic of auto racing—widespread prohibition of private sector Sunday driving, gas rationing, etc. That a year after war’s end 200,000–300,000 spectators would rouse themselves to show up at racing venues surely says something about this particular sport’s effect on the psyche!

From hillclimbs in out of the way locales to Formula races of international standing and from homebuilt specials (what in the US would have been midgets) to big-time works cars, Schumann offers a colorful and well-written account. It ends in 1955, that fateful year of the carnage at Le Mans but Schumann makes clear that Mercedes’ decision to withdraw from racing then had already been made earlier due to business considerations.

The story is presented in basically chronological order but is divided into some 30 “topical” chapters. What this means is that if you want to just randomly read bits here and there you’ll have difficulty knowing what year you’re in. Having, however, locations be printed in boldface makes it easy to spot progressions in the text. There are some 80 pages of Appendices (racing formulae, 60 pages of race results, names of winners, engine and car specs, racing colors, abbreviations) and a Bibliography. There is no Index but since the author explains his rationale for it, we will not find fault with this. A stand-alone section contains 40 pages of color photos, some of restored cars.

Schumann comes from the auto/aero engineering side and from 1969 to his retirement in 1994 was editor in chief of a trade magazine for propulsion/steering systems which means that the technical aspects of the story are not neglected. To appreciate how well he is able to prioritize what matters over what is peripheral, consider that he includes, in a book that deals with a 1001 things, two different photos of the radical air brake on the M-B 300—something that not even the most recent book on just this one car bothers to do. So, embrace this book, this series as the reference-level standard it is. (Pity that the publisher went bankrupt in 2018, and even though they relaunched under a different name, these books are no longer in their list.)