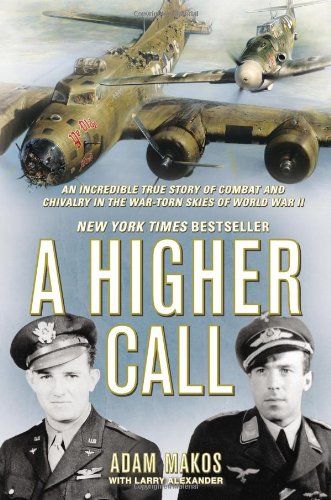 In late December 1943, a badly shot-up B-17 bomber was escorted to safety away from Germany by a German fighter pilot. The nearly destroyed B-17 beat the odds and miraculously made it back to England, and the German air-ace went back to knocking down other Allied bombers. This is the story of that strange encounter, told from both sides.

The majority of the book deals with Franz Stigler, a German fighter pilot and prewar flight instructor who survives the war after 480+ combat sorties over Africa, Italy, and Germany. His personal code of ethics was based on his Catholic upbringing plus a romantic ideal left over from World War I that fighter pilots were knights-of-the-sky, responsible for not killing their enemy once the enemy had been vanquished. The code said a pilot could be killed by surprise with no warning from behind while flying his airplane, but not after he was defenseless and had bailed out. Killing defenseless pilots dangling from parachutes or floating in life rafts was considered bad form.

To German fighter pilot Franz Stigler, the B-17 was not only helpless but doomed to crash. He flew close alongside the crippled plane to protect it from German antiaircraft fire until the B-17 crossed the coastline and was headed out to sea. He then gave the enemy pilot a salute, and peeled off. In his eyes, the crew of the B-17 was totally defenseless and their plane no longer a threat. Both had become non-combatants. In an act of impulsive chivalry he acknowledged the bravery of the vanquished enemy crew and sent them on their way, leaving their survival for the fates to ponder and act upon.

For young Charlie Brown, the 21-year-old B-17 pilot, the experience was surreal. In his words, “What a hell of a way to start a war.” On his first bomber combat mission his plane had been hit with antiaircraft fire, then attacked and riddled with machine gun and cannon fire. With his B-17 engines dead or dying, 16 feet of one horizontal tail stabilizer blown off, guns frozen, oxygen gone, fuel tanks shot up, the fuselage looking like Swiss cheese and crew members wounded and dead, he was forced to drop out of formation and began lagging further and further behind his rapidly disappearing bomber group. All that was left was for some lucky German pilot to finish shooting him down and claim the kill.

Escaping that impossible situation seemed just that—impossible. Yet Captain Brown and his surviving crew did escape. They made it back to England with a story of heroism that would normally attract a flood of military medals and newspaper releases. But it was not to be. Adding insult to injury, after telling their story about a merciful act on the part of a German fighter pilot that saved their lives, the US military decided to officially erase the event out of concern it might make the enemy look friendly, a view neither side in a conflict to the death wants to perpetuate. No medals or awards for bravery for Captain Brown and crew. The whole affair disappeared under a bureaucratic rug. Not until 50-some years later did the truth come out, and then only because Charlie Brown searched out Franz Stigler through a letter written to a German newsletter subscribed to by ex-German air force fighter pilots.

This book is a light read that goes fast and entertains the mind with images that astound and amaze. Written as popular history, the book tries for an on-the-scene description of the events by taking the reader right into the cockpit, or mess tent, or administration building. Wherever the action occurs, you are there. But to my mind the descriptions came across as slightly repetitive and forced. What the book lacks in literary depth and flow it makes up for with a true story told with insightful detail that rises above the safe writing style. The descriptions of the action don’t come off as realistically as I personally would like, but who cares? The facts of the story carry the reader’s interest. This is not Norman Mailer’s The Naked and the Dead, but it’s good enough to be a national besteller, and I enjoyed reading it. Besides, truth is stranger than fiction.

The lead author of this book is Adam Makos who has made a life out of documenting and interviewing veterans from all the wars the US has been involved in since WW II. He is also a pilot who has actually flown a B-17. For more about his travels and interests, visit ValorStudios.com. For a 30-minute radio interview with author Makos, go to prx.org/pieces/118622. The second author, Larry Alexander, has written other war-related New York Times bestselling books, and has won awards for excellence in journalism.

A center section in the book contains 75 black and white photos showing everyone involved. A beautiful photo-realistic John D. Shaw oil painting shows Stigler’s Bf 109 and Brown’s B-17 flying together, the damage to the B-17 being particularly impressive. How the plane stayed in the air is difficult to imagine.

The book starts off with a Dedication, then a Contents page listing 25 chapters, followed by 343 pages of text. An Afterword closes out the story and is followed by Acknowledgments, a To Learn More section, then Notes and a Bibliography.