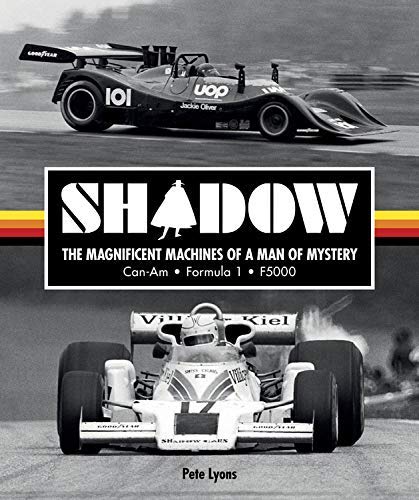 “Don Nichols remains to this day perhaps the most fascinating character I have ever known.”

This is a book you really shouldn’t judge by its cover!

There’s nothing actually wrong with the dustjacket design but it’s just a safe, boilerplate design for a book about race cars. There are black and white pictures of Formula One and Can Am Shadows on the front, and a color picture of team boss Don Nichols on the back. But remove the dustjacket and you’ll discover something far more fitting for the subject matter. What lies beneath befits the subject so much better, the plain black cover with the white-caped figure

echoing the Shadow livery and giving a nod of recognition to the “riddle wrapped in a mystery inside an enigma” that which was Don Nichols.

Formula One had no shortage of innovation in the 1960s (think of the Honda RA 272 or the Lotus 25, 49 or 72, inter alia) but the Seventies saw a very different type of disruption. Because the Cosworth DFV was available to anybody with a big enough checkbook, the reign of Grand Prix grandees and posh privateers was being subverted by a quorum of upstarts—teams like March (strangers to modesty), Frank Williams (ambition unmatched by budget) and Hesketh (champagne-fuelled iconoclasm). Shadow were parvenus too but, even in this company, they always succeeded in being somehow “other.” Being American helped because, then as now, Formula One was essentially a European thing. But it was also because Shadow had a charisma and mystique which was arresting, and the team did nothing to dispel the myths and rumors that surrounded its principal. And Don Nichols was right with the Seventies zeitgeist, because who could resist a hint of Cold War espionage with a side order of entrepreneurship and a seasoning of style? 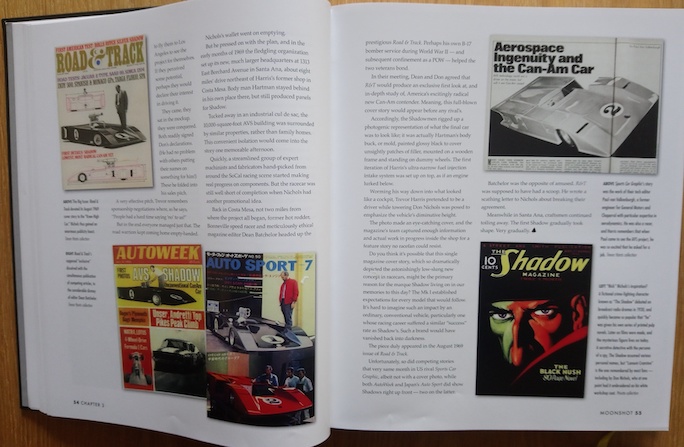 Author Pete Lyons was a disrupter too, and I’m surely not alone in believing the standard of his Grand Prix reportage in Autosport magazine remains unsurpassed. He had been preceded by a more patrician breed of journalist, the sort of man whose humorless prose felt as if it was written out of  a sense of duty to keep the lower orders informed of how their betters were doing in Grand Prix racing. But Lyons didn’t write out of noblesse oblige, he was an American for crying out loud, and he didn’t condescend or patronize. He was one of us, he was the chum who’d lucked into an All Access pass, and he just couldn’t wait to tell you exactly what the Bear (Denny Hulme) had said to Baby Bear (Jody Scheckter) at Monza the previous weekend. The story of Shadow has long needed telling and, given Lyons’ previous life as a Can Am reporter, I doubt if anybody could have been better placed to write this book.

At 9½ x 11½ inches, and weighing in at over 5 pounds, this beautifully produced book justifies its $99 price. It is not without fault, and I will mention my (minor) cavils later on in this review, but its combination of extraordinarily detailed text and superb illustrations make it an essential buy for any student of Can Am and/or Formula One history. 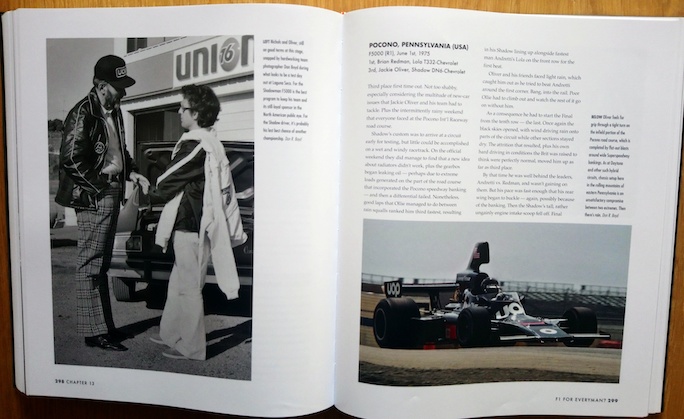 The author uses a combination or personal testimony from those who populate the Shadow saga—men like Tony Southgate, George Follmer, and nemesis Jackie Oliver—with contemporary race reportage and much personal insight from the man himself, Don Nichols. Lyons had access to his subject not only in period, but also had many conversations with him in his old age, when the ever active Nichols was still plotting and planning, even as an octogenarian. Motorsport does not want for strong personalities, but Nichols is up there with the best of them, with combat in World War II, CIA links, and mysterious and lucrative business dealings in the US and Japan. Maybe some of the back story was artifice, just smoke and mirrors to camoflage something more mundane but who knows, or cares, when Nichols had such an amazing ability to seek out a supporting cast of visionary designers and co-conspirators to accompany him on Shadow’s journey? People like Trevor Harris, who created the bizarre AVS Shadow Mk 1 Can Am car, a machine so low that the original design concept earned the nickname “the two dimensional car.” And if the Tony Southgate-designed Shadow Formula One car was of more conventional design, it still made a hell of an impression when I saw Follmer and Oliver in their DN1s at Silverstone’s International Trophy in 1973. Like the JPS Lotus, the black paintwork endowed catwalk style, and the simple UOP logo and Stars and Stripes added even more. 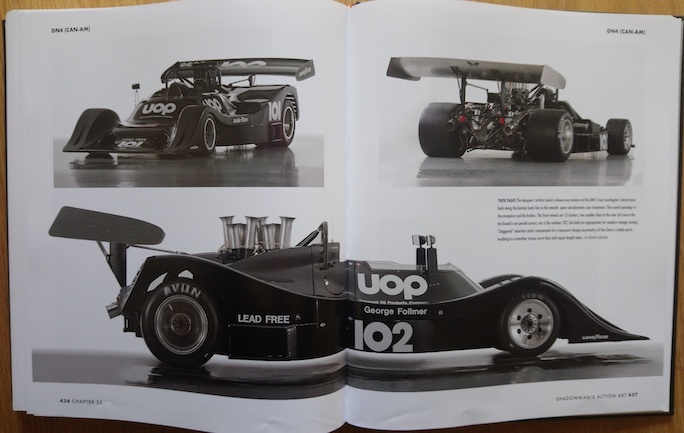 The essence of Can Am was the laissez faire philosophy that the only rule is that there aren’t any rules and I greatly enjoyed Lyons’ account of Shadow’s adventuring in the “anything goes” formula. His chapter headings say it all, starting with “The Tiny One” (AVS Mk 1), continuing via the “Midsize One” and “The Conventional One” (Mks II and III ) and concluding with “The Big One” (DN2) and “The Best One” (DN4 ) in 1974. Each machine was striking in its own way, but the DN 2 and DN 4 were arrestingly beautiful cars, and could stand comparison with those red Italian cars that display the Cavallino Rampante on their flanks. As a Brit, I had to rely on grainy black and white pictures in Autosport for my awareness of Can Am, and the assembly of stunning imagery the author has put together is a revelation. Many of the pictures were taken by himself, complemented by equally wonderful shots from the likes of Dan R. Boid and the legendary Rainer Schlegelmilch. But there’s a slight problem with some of the captions—Lyons has a very distinctive style that, although endearing, might seem anachronistic, even folksy, to some younger readers. Try this, for example: “. . . Shadowlady . . . wantonly flaunts her naked crossover fuel injection system. What had that girl got herself up to in wicked California?” Your sixty-something reviewer is far from “woke” but I did wince at that, just a little. What is never in question is the author’s effervescent love of the sport and (ironically, on the same page as the “Shadowlady” caption) his rhetorical caption of the photograph of the Can Am field, at Road America in 1971, epitomizes his enthusiasm: “Wow, just wow . . . How could it get better than this?” (the answer , sadly, is of course that it never really did). But Lyons isn’t just a “trousers on fire” sort of writer, because he does not shrink from the heavy lifting in his technical descriptions of Shadow machinery, and there’s plenty evidence of his diligent fact checking. Oh, and talking of facts, I will share my other criticism of the book: I like the way each chapter includes interviews with key players in the Shadow saga but I question the wisdom of including a precis of each race. I would have preferred each season’s highs and lows to form part of the main narrative, supplemented by appendices of race results, season by season, for Can Am and Formula One. 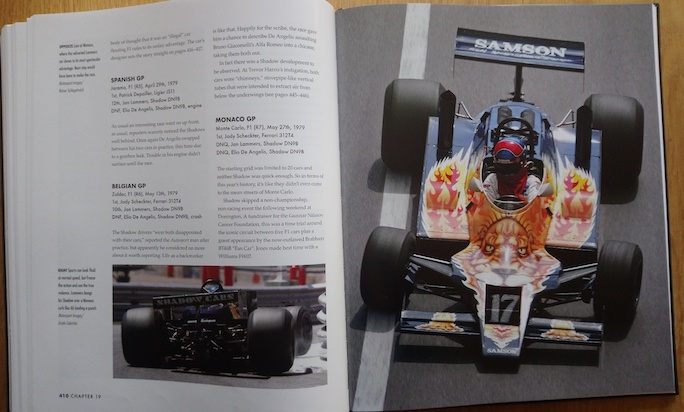 I closely followed Shadow’s Grand Prix adventure in period, seeing Tom Pryce take the team’s first Formula One victory at a chilly Brands Hatch in Spring 1975, and its third and final pole position at Silverstone four months later. But for every success there was tragedy—Peter Revson had been killed in testing at Kyalami the year before and Pryce was killed at the same circuit in March 1977. Incidentally, when researching some background for this review, I inadvertently found out, to my horror, that you can buy a painting of Pryce’s crash—but would you want to meet the guy who bought one??

Later in 1977, Alan Jones won his first and the team’s only Grand Prix in Austria but even by then the cracks were showing, and Shadow was already becoming just another struggling F1 team. Lyons describes the tensions that led to the schism at the end of the year, which led to most of the Shadow staff walking out to create the Arrows F1 team. Unwisely, Tony Southgate had left the building with some of the drawings of the next Shadow under his arm and, notoriously, the Arrows FA 1 so closely resembled the Shadow DN9 that Don Nichols won a court victory against his former colleagues. But that was a Pyrrhic victory, and it was the only thing Shadow was destined to win in Formula One before its ultimate demise in 1980. As the author says, about the 1978 season, “Let us evade tedium. We need not call out every detail of the next two and a fraction years. Shadow’s time of promise had passed.”

Shadow is the team whose legacy is in inverse proportion to its meagre tally of eight race wins and a single series championship. Pete Lyons tells us the story of innovation, showmanship, expertise, tragedy, betrayal and the occasional success, and he tells it beautifully, in the style that first beguiled many of us half a century ago. Ultimately, this book is about one man, the old guy who took time out from curating his hoard of memorabilia and machinery in a warehouse in Salinas, CA to talk about his past to a guy named Pete. It’s not a cheap book, but it is a damn good one!

Let me leave you with a final thought. The UOP logo is the defining image we associate with the Shadow marque and the author tells us how Universal Oil Products was selected, almost by chance in 1971, as a possible sponsor. On page six of the book is a picture of Don Nichols in his old age, sporting a cap emblazoned simply “don.” Invert the picture and it reads “uop.” It isn’t quite nominative determinism, but it comes pretty close, and that is nothing less than we should expect from a man of mystery, right?