Flying the SR-71 Blackbird: In the Cockpit on a Secret Operational Mission 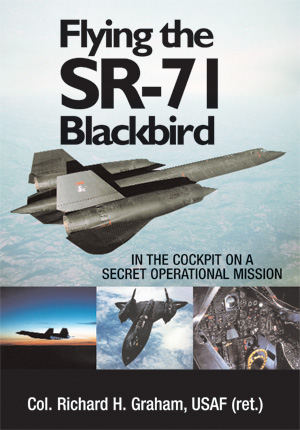 As aircraft historian Jay Miller rightly says in his Foreword, this book is the “missing link” in the existing literature on the Blackbird, “arguably the most significant aircraft of our time.” At the book’s core are detailed descriptions of the actual step-by-step procedures the pilot and his backseater would apply, in fact this book is the first to reproduce the actual Abbreviated Pilot’s Checklist (there is a separate one for the Reconnaissance Systems Officer/RSO in the rear cockpit). This is excerpted from the original flight manual that runs to over 1000 pages and, needless to say, was highly classified until the 1990s. While this sort of virtual tour of an SR-71 may be of special appeal to pilots or to fans of the Blackbird who devour every morsel of information, there’s more to this book than airmanship. Graham was not only an SR-71 pilot and instructor (1974–1981) with 756 Blackbird hours, he was later also the commander of the squadron (9th SRW) that had responsibility for worldwide U-2 and SR-71 operations and all the related support hardware. So, on the one hand he can describe every single switch on the plane and on the other speak to the bigger picture such as the difference between “spying” and “overt intel gathering” and cite specific examples of SR-71 missions changing word history. To the person not used to thinking of such matters, the complexity of issues such as overflights (incidentally, Graham is adamant that the landmasses of the USSR and China were never overflown post-U2) and landing rights on foreign soil or the risk/benefit analysis in deploying a Blackbird will make for fascinating reading.

This decorated aviator has two previous, excellent Blackbird books to his name. Their focus is on the plane’s history, crews, and the reactivation in 1995 so this third book, while making brief references to those topics where relevant, focuses on the specifics of planning and executing a mission. The word “operational” in the title refers here to those reconnaissance missions that are flown for the purposes of gathering intelligence on foreign—often hostile—countries. In the 21 years from 1968 and the first deactivation of the program in 1989 there were 3551 such operational sorties, mostly flown out of Okinawa and England. After briefly detailing the recruitment process for the handpicked crews (which, unusually, for reasons of safety and efficiency, stayed paired for their entire SR-71 tour), simulator and flight training, and the daily routine on base the author explains command authority and how requests for SR-71 tasking and mission planning worked their way up the chain of command.

From flight planning the day before departure to rehashing the mission over vodka and tonics, Graham then describes in detail each phase. Nothing is as simple as it may sound to the uninitiated! Not the mandatory high-protein/low-residue preflight meal (to minimize in-flight bathroom breaks, which itself is covered on two pages!) or getting a physical or being suited up. Certainly not nighttime radio-silent air-to-air refueling. In the cockpit, Graham describes the exact procedures in the order specified by the checklist, using the same jargon, phrases, acronyms, and voice commands and call-outs the pilots would use. Some 30 pages describe the three main front-cockpit control panels separately. Diagrams show them in relation to overall cockpit layout and name every dial, switch, and gauge and the text describes the purpose and function of each. Another 50 pages in similar fashion take us from engine start-up to Mach 3 cruising.

Supersonic flight is a complicated affair and charts and graphs are used where they help the text. A marvelous description by Pratt & Whitney’s engine manager Arnie “Mr. J58” Gunderson, will make even ordinary mortals think they actually understand one of the truly revolutionary aspects of this aircraft: ram recovery, i.e. how moving the inlet spikes (the cone-shaped apertures at the front of the engine nacelles) forwards and backwards was able to capture the supersonic shock wave so as to provide additional thrust. This is accompanied by diagrams of airflow patterns and explanations of inlet unstarts and restarts and various other flight behaviors. From an engineering point of view, these are fascinating principles, not always easy to understand, but the writing is clear, inviting, and easy to follow in broad strokes even if you might be baffled by some of the details.

Sidebars introduce auxiliary material; there are many quotes, some pages-long; and all the photos are bundled into an 8-page color section. An Epilogue bemoans the retirement of the aircraft. Appended are various memoranda (Black Shield, Yom Kippur, Cuba; reproduced here for the first time publicly), pilot’s checklist, a flight plan and map, and list of acronyms. Index.

Readers already familiar with the subject will be interested to know that Graham addresses two detail issues that often start arguments: did President Johnson call the plane “SR” or “RS” when he revealed its existence to the public in 1964, and why does a Blackbird usually refuel soon after take-off.

There’s not a wasted word in this book. Unless you’ve worked in or around a Blackbird yourself, this book takes you places that are normally off-limits. Surely Graham has another book in him! His commitment to the SR-71 still today is evident in the fact that royalties from the first two books were donated to the National Air and Space Museum for the restoration of their Blackbird and the royalties from this one will go to the Frontiers of Flight Museum in Dallas for the restoration of its SR-71 simulator.