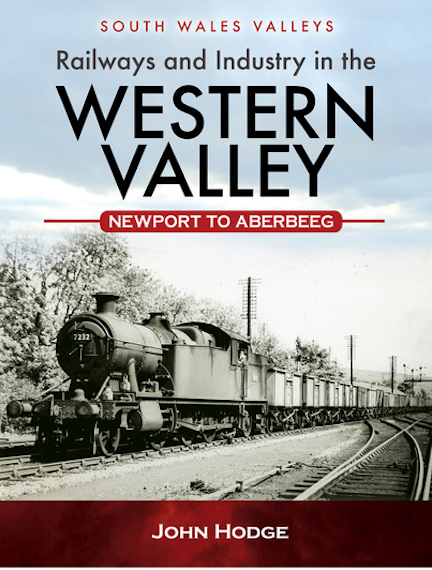 The Welsh valleys today sadly tell a story of decline. The coal mines have long closed down and the iron and steel works have gone the same way (with the exception of Tata Steel, a victim of globalization) However for 100 years the Southern Welsh Valleys were one of the foremost industrial areas in the United Kingdom.

Back in the day the area needed an infrastructure to match its huge capacity to get the coal and the metal products to the docks at Newport to be shipped around the world and to other parts of England for domestic use. This detailed book is a survey of the industry of the industry and the surrounding railways of the South Wales Valleys. The approach is a highly detailed survey that will no doubt become a valued work of reference for South Wales local historians but also for railway buffs.

The book is divided into four sections. The first two are the main historical sections of the book. The first deals with the establishment of the infrastructure needed to support industry that was growing up around the Western Valleys. From 1819 to the middle of the nineteenth century it was served by canals with the railways coming somewhat later. The first chapters provide an interesting overview of the companies involved in the development and their fortunes and misfortunes relating to the financial and bureaucratic processes that the developers had to go through at the dawn of the industrial age as well as the engineering and logistical feats.

This is linked in with the history of Docks at Newport, themselves starting with the Town Dock developed in 1842 and charting the Docks and how they tie in with the railways before the book moves on to a central section detailing with “operations.” This is an overview of the rolling stock used on the lines down to the dock. I must confess that I came to reviewing this book without any detailed knowledge of old stream trains and railway infrastructure so I did learn quite a bit from it, even though the language and information is really geared towards the really passionate railway/steam enthusiast who I am sure will gain great pleasure in reading the technical details and the looking at the pictures of the various engines that make up the central section of the book. I found that I was skipping over the more technical details of signal boxes, line gradients, and details of loading the carriages.

The last section of the book detailing the locations along the lines was the most interesting to me, not so much for the detailed location analysis as for the large amount of black and white photographs. Again the detailed analysis of the locations would tend to appeal more to the specialist or anyone with a connection to the area rather than the general reader but anyone who likes to wallow in nostalgia will enjoy the photos of the lines and the engines raging from 19th century rolling stock though to fairly recent diesel locomotives.

So how do I rate this book? Well, I must admit that I was unable to read it from cover to cover and I found myself flicking though it as one would do a coffee table picture book. I have to be honest and say that it only had limited interest for me as someone who has no connection to the South Wales Valleys and who is not a railway enthusiast. The prose is very technical and dry, even when dealing with the historical aspects at the beginning of the book. This is fair enough as a straight record of local history and I acknowledge that the book is written by an amateur historian who has clearly put a great deal of research and effort in both collating the historical facts and in putting together the abundance of illustrations.

The book is well produced, being a good-sized hardback and printed on glossy art paper which makes the photographs really stand out. I am sure that anyone who worked in the South Wales coal and steel industries or on the railways that served them will find this book both a wonderful reminder of meaningful times. This can clearly be seen in the fact that the book has received nothing but positive reviews. And those specialist readers will delight in knowing that three more books in this series are to come.

Posted Under: Trains | Author: Matthew Bodycombe | No comments yet

The Gilmore Car Museum, Miles From the Ordinary »
« The Art and Inventions of Max Fleischer, American Animation Pioneer