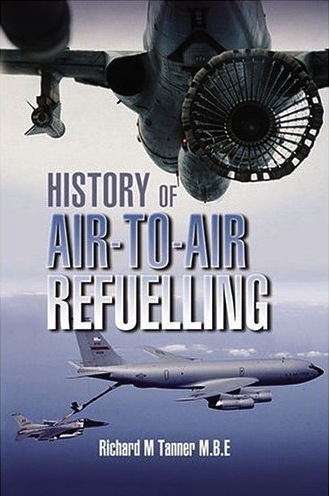 “Fill ‘er up!” How would you do if you had to fill up while you’re moving, and the pump is moving, and the hose is moving? And you can’t just reach out and grab the nozzle with that wonderfully articulated arm of yours—instead you have to maneuver the entire vehicle—which is the length of a city bus or two—and line up the filler neck with the nozzle just so. And let’s throw in wind that affects all the bits and pieces differently. Oh, and let’s make it darkness. And inclement weather. Step right up, young grasshopper, and meet your friendly air-to-air refueler.

To the novice it might be useful to point out that there is much more to air-to-air refueling than merely extending range or increasing loiter time on station. Consider such issues as the safety factor in taking off with less fuel, or being able to take off with greater payload, a shorter take-off roll, and even the unique situation of the Blackbird’s fuel properties. While pre WW II early transatlantic flying boats used aerial refueling there is, due to cost and logistics, no modern-day regular civilian use of in-flight refueling. (A 1990 report pegged the cost of training a boom operator at a cool $1 million!)

This is not the first or only book about this subject but it is probably the only to one to be written by an industry veteran and insider. Tanner (b. 1926) joined the premier British outfit Flight Refuelling Ltd. in 1949 as junior draftsman and left 39 years later as Principal Design Engineer. Along the way he picked up an MBE (1984) for his work on tanker conversions during the Falklands War. A former boss calls him a World Authority. Captial letters no less. And there is no argument that Tanner is a WA, brimming with information. And he is probably a really good writer of really good technical papers—and that’s how this book reads. That it also looks that way is obviously the publisher’s doing, as is the abysmal editing and proofreading. If this book is on your reading list as a command performance for, say, professional reasons—roll up your sleeves and be prepared to earn your keep. The merely curious will find this book rather a test of their determination.

Starting at the beginning, Tanner presents the origins of in-flight refueling and traces its 1923–1993 development from American barnstormers’ stunt to widespread operational service. He presents a thorough account of how requirements came to be identified, and how through trial and error solutions were developed. His own employer, Sir Alan Cobham, was a pioneer in the field and, being a renowned long-distance flyer, was one of the first in England to grasp the importance of in-flight refueling versus having to stage fuel supplies on land ahead of the trip. Over time, his firm would be instrumental in the invention of the probe and drogue system that, along with the boom system, became the prevailing technology. At this point an automobile connection begs to be made. When Cobham started experimenting in 1932 someone else had already taken similar initiative: Mildred (aka Mrs. Victor) Bruce, the British racing motorist, speedboat racer, aviatrix and businesswoman. With only 40 hours of flying experience she decided in 1930 to best the world endurance record and had the foresight to buy herself a tanker plane from which to refuel her Bristol Fighter in flight.

Tanner covers the various methods of connecting tanker to receiver, types of modifications to either aircraft, and technical and safety issues. One method that is not covered is wing-to-wing refueling which was often used by Soviet planes (which are not covered in the book at all). Many photos and drawings illustrate the procedures and lots of technical drawings and cutaways show operating principles and internal arrangements.

The bulk of the book consists of detailed descriptions of some 38 specific aircraft or techniques. Each of these is listed in the Table of Contents.

If the topic of aerial transfer interests you do know that there is also the relatively new field of mid-air rearming, presently stymied by financial and technological problems.

You Can’t Wear Out an Indian Scout: Indians and the Wall of Death »
« Ces belles voitures dont a rêvé mon père