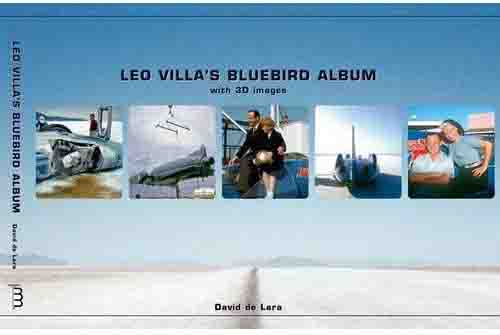 The Leo[poldo Alphonso] Villa of the title spent almost his entire working life with the Campbell family of speed freaks, first Sir Malcolm Campbell (1885–1948) and then his son Donald Malcolm Campbell (1921–1967) who between them held 21 land and water world speed records. Piles of books have been written about the Campbells, all from the outside looking in. This one is different. It is a selection of hundreds of photos Villa took in the 1950s and ’60s of DMC’s record attempts. As chief mechanic, friend, and surrogate father Villa was closer to him than most anybody else and his photos, therefore, show a side of Campbell the press photographers of the day were not privy to. Likewise his photos of the Bluebirds, be it construction, testing, or racing are the kind the press would not have had close enough access or opportunity to take. Moreover, Villa was one of the few people on the Bluebird team to keep diaries and notebooks and they, along with his video films and piles of photos, survived him.

His notes, augmented by transcripts from interviews he gave in the 1970s, make up the text of this book. “Text” here means extensive photo captions in a somewhat conversational style, there being no other connective narrative except for a short Introduction. This is first and foremost a photo documentary and while there is a lot of information given, it is not organized in such a way (there is also no Index) as to serve as a stand-alone history of the Bluebirds or the Campbells. Considering how little text there is the number of typos is disproportionately high.

The book, printed in landscape format, materially advances the photographic record of the WSR events and of DMC’s life in general. The first three pages show photos of Sir Malcolm, elsewhere there are photos by DMC himself of three of his wives. There are also newspaper clippings, various realia, and shots of assorted people and locations related to DMC’s travels. Villa is in quite a few of them—it is not disclosed who took those. Roughly the first half concentrates on boats, the other on cars. There are a few technical drawings as well as a b/w cutaway of K7 and a nicely detailed (unattributed) color one of the Proteus car. Each chapter is introduced by a detailed chronology. Appended is a one-page table of DMC’s 1955–67 record stats.

Much is made of the 3D images—more specifically polychromatic single composite photographs (anaglyphs) that are viewed through colored viewing glasses— but they are a curiosity at best. Two-color glasses in chromatically opposite colors (red/cyan) in a handheld cardboard holder are supplied. They were taken with one of three 35 mm Stereo Realist cameras DMC had bought in Beverley Hills while awaiting repairs to his hydroplane in Nevada. The publisher says there are “almost 30” of them. Good luck finding them with certainty! They are usually the ones that look at first glance fuzzy and some have a distinct “double exposure” look. If they are such a big deal, how hard would it have been to provide a list of their page numbers or add an icon to the specific images?

Swiss-based British filmmaker De Lara acquired 30 boxes of Villa’s 3D photos in the course of research for two documentaries he is making about the Campbells. Desmond, a friend, is a powerboat historian who had already worked with Villa in the 1970s on two of his books. Poignantly, the book was launched on what would have been DMC’s 86th birthday, on 23 March 2007, at the Ruskin Museum in Coniston, Cumbria. Coniston Water was the stage for several of both Campbells record attempts and the site of DMC’s fatal crash in K7 at a speed in excess of 300 mph (480 km/h) in 1967. The boat, and a few weeks later his body, were not raised until 2001.

Considering that this book is all about the historical record and is done by a documentary filmmaker it is all the more irritating to encounter certain instances of vagueness. For instance, in the Introduction the authors say “Following [Villa’s] death in 1979, this unique and intimate collection was acquired at auction by . . . de Lara.” Why not be specific and give a date? (1992, at Neales of Nottingham.) Then, the book is all about Villa’s photos but also includes the work of a dozen other people/archives. Why not identify those photos? Even some of the 3D images are from one other source but the credits don’t say which are whose.

Also available as a numbered limited edition, in slipcase, signed by surviving members of the 1966/67 team, at a £125 of which a portion is being donated to the Ruskin Museum for their restoration of K7 which DMC’s daughter Gina gifted to the museum in 2006.

Abarth: The Man, The Machines »
« Motor Racing: Reflections of a Lost Era