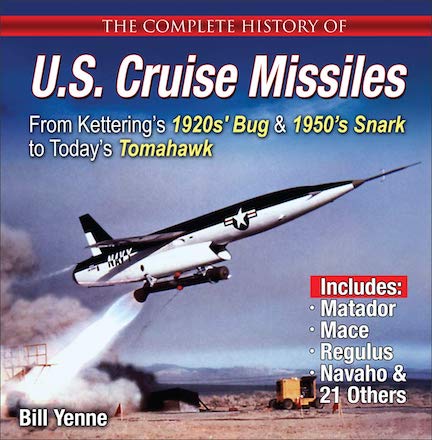 “‘Deterrence works if our adversaries know that we can hold at risk the things they value. This weapon will enhance our ability to do so, and we must modernize it cost-effectively.’”

A news item some time ago made almost no splash in the general press: the Chinese People’s Liberation Army Navy Surface Force commissioned their first of an expected eight Type 055 guided missile destroyers. Its primary armament are 112 missiles of four different kinds, including cruise missiles, and in the future the ship’s Universal Vertical Launch Cells make it possible to launch anti-ballistic missiles.

When missile launches themselves make news it’s never a good day, and when cruise missiles are involved, the doomsday clock moves closer to worry-time.

The size, speed, and range of modern missiles would have been unimaginable a century ago when the idea of a wirelessly controlled “aerial torpedo” first caught the public’s imagination in the 1909 British film The Airship Destroyer. Yenne’s book was published in 2018 to mark the centenary of the famous Kettering Bug entering the US arsenal. It came too late to play a role in WWI and remained a peripheral weapons system until other countries and other circumstances caused the US to rejigger its tactical doctrine in which long-range missiles were given a prominent role.

The “Complete History” reference in the book title would be oddly hyperbolic for this small a book and it really is more of a series title. Yenne himself has written other missile titles for other publishers, and there exists a large body of work on this subject.

This book is more about the why and who then the how. How to hit something you do not see is, well, rocket science. Add to that explosives that should only explode on (or even more complicated: just before) impact and have a predictable blast radius or destroy only certain things and not others and you have a topic that could not possibly contained in these small-format 204 pages.

What this big-picture book will do is bring you up to speed on why unmanned powered flight was even deemed desirable already at the early stage of aviation, who the thinkers and the sponsors and the moneymen were, how to improve technique and technicalities when there was no pilot to offer feedback, and how step by step one thing led to another—including a discussion of captured German missiles/rockets—resulting in “The Cruise” becoming the Big Stick that levels the playing field in more than merely the literal way.

Since this is a book about the US arsenal it discusses the various services and their specific requirements (and different cultures, a complex topic in and of itself) and the performance and operational parameters of various missiles, with the Cold War era dominating the narrative.

The book will by no means answer every question or exhaust any one aspect but it will give you—perspective. One thing that is not much mentioned is the cost to develop and field missiles, which, in the end, is the key point of friction between the haves and the have-nots (you only have to pick up a newspaper to know who’s who).