Hank Felson didn’t write only car books but this one, part of a rodding series, was his best seller: eight million copies over the years. See why.

Dave and Clive went on a trip . . . Dave being a British motorsports figure and Clive the Little Red Corvette he bought in California. Dave even went there to collect it in person which of course spells road trip. His little son was too small to go along so dad wrote him this book.

It’s not often that a book receives a special do-over to suit the interests of a specific market. Here, an adult book has been reconfigured for young adults, loosing nothing in the transition while gaining more photos!

This book accompanied the opening of the new Alfa Romeo “Time Machine” museum in 2015 and presents the history of the marque the way the museum does.

This is an annual volume that analyzes, reviews and reports on the year’s auction results from 17 automotive auction houses—nearly 90 events. But this book is far more than just a bunch of dry lists.

Leaving aside the question of whether children should be coloring warplanes, this book offers 3-views and outlines of 15 aircraft, along with brief specs and a few words as to their purpose. There are worse ways to spend $5.50 . . .

The slender book, splendidly illustrated, offers the briefest of glimpses of the man behind the car, Henry Royce, whose high standards for everything he encountered propelled him into greatness and also into sickness. 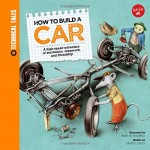