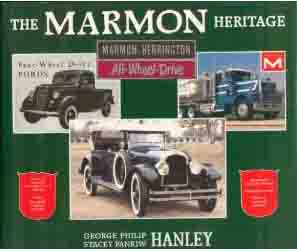 This is the best of books. This is the worst of books. First, the “best” part: The authors detail the leadership and product evolution of the Nordyke & Marmon Company from 1851. This gives a rare inside look at how a top-200 American company morphs from 1851 global flour mill equipment business to 1902–1933 premier US auto manufacturer to important World War Two military-industrial complex member, then back into civilian transportation with trucks and busses, mining equipment, rail cars, all the while adroitly changing with the times until today the company is privately held and renamed Marmon Group (130 global business units, owned by Berkshire Hathaway of Warren Buffett fame). In short, Marmon started big, and still is.

Before the Depression of the 1930s killed the automotive side of the business, Marmon made innovative and well-engineered cars starting in 1902 with air-cooled V-4s and V-8s. By 1906 the company had patented full-pressure lubrication for their engines, was casting aluminum body sections, and used a smooth-riding patented double-articulated frame suspension unlike anything else on the road. In the 1930s the company was building cars with beautiful V-16 engines that chauffeured the rich and famous. All were designs of Howard C. Marmon, and they all worked because everything was “engineered” as opposed to “guessed at.” And Marmon’s engineering was top notch, because the international flour mill business required sophisticated sales, finance and manufacturing capabilities, all traits required by the nascent US auto industry, but sorely lacking in most well-intentioned early auto manufacturing entrepreneurial adventures.

Marmon approached the auto industry methodically by hiring university trained engineers and building thoroughly tested prototypes. They then designed bespoke production facilities to build the end result. Industrial might and money applied to the problem versus the inspired but naive “Gee, guys! Let’s build one in the barn, then see if we can sell it!” approach. Marmon cars were soundly financed and soundly developed from start to finish. All the people, products, financial schemes, acquisitions, mergers, and hostile takeovers are detailed in a clear and direct manner. I cannot imagine another Marmon book covering the evolution of the company from beginning to 1960 ever being done again. There is no need. The only thing possibly left for future authors to write about would be a more finely detailed examination of this or that aspect of the Marmon company already outlined in this book.

The author’s writing style is more academic than enthusiastic, but that’s the way I like it. When he gets done walking me through the construction and operation of a transmission, I can picture it clearly. The same goes for the suspension, frame, engine, body and drive train. Everything is covered in detail and made clear, making this book a gearhead’s dream of detailed explanations of exactly how everything works and why, written by an engineer who knows what he’s talking about, and knows how to describe it clearly to a non-engineering audience. The same is true for the financial and sales side of the Marmon story. The creative people and their talents are all described, including the automotive engineering inventiveness of Howard C. Marmon, and the 1930s four-wheel-drive expertise of A. W. Harrington.

Now, for the “worst” part:
This book makes you want to get down on your knees and thank whoever wrote it, then hit whoever proofread it over the head. Also, it has no Index, and that’s a severe problem with a 608-page book. Want to flip back to review Walter Teague’s role in some aspect of V-16 body design? Or operational details on the experimental air-cooled V-6 of 1905? How about that insightful analysis of the oiling problems of the high-volume, inexpensive Marmon-designed Roosevelt car of 1929? A refresher on the details of Harry Miller and Preston Tucker’s offer to buy Marmon? With no index a sharp memory for where you might have seen that specific information in the book will be required to find it. Most pictures and engineering drawings look like they have been reproduced from period publications, but that’s acceptable because they show a wealth of information that otherwise would not be available.

The real worst part, however, is terrible typesetting. Out of curiosity I had five randomly selected pages of this book proofread by an unbiased professional. Multiplying the findings by the number of pages in the book resulted in a statistical total of 9,606 typographical, spelling, and punctuation errors. Over 9,000 typographical errors! Luckily, they’re buried in a typeface that can’t be easily read. The typeface itself is dark and heavy, and the line length is too long for the small, dark type. The white space between the long dark lines of type is too narrow, making it necessary to constantly focus hard on finding the beginning of the next line of text, instead of simply reading along effortlessly. A shorter line length would have solved that problem, or a more easily readable typeface in conjunction with the existing long line length. Instead of a fun and informative read, you get a visually tiring exercise in frustration.

An insightful and intelligent engineer obviously wrote this book. It’s a shame its printed design and execution fell so far short of matching the author’s abilities. A 2nd edition was printed in 1990.

Posted Under: Automobiles, Award Winner, History, Out of Print | Author: Bill Ingalls | No comments yet