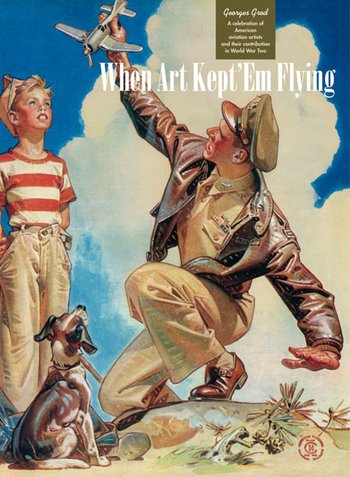 No matter in what culture and what era, and for better or worse, children are impressionable. The author (b. 1931) had the misfortune of growing up in war-torn occupied France, old enough to know what was happening but young enough to experience it “as if watching an exciting film.” While he says he was spared the horror of war, he did perceive a measure of latent fear that made the relief at being liberated from German occupation by the Americans distinctly palpable. So much so that young Georges Grod embraces life—and all things American. Now, in his older years, he pays tribute to begoggled aviators, Coca-Cola, and Life, Liberty and the Pursuit of Happiness because the Americans not only restored him to peace but also planted a seed that would blossom into a lifelong interest in modeling, aviation and cartoons, and a professional career in film.

“For many contemporaries deprived of liberty and maybe blasé, the mention of these times of solidarity between men often come from different parts of the world, animated by high sentiments, cause nothing more than an ironic smile. At the cost of their life, they gave nevertheless a meaning to ours.”

The chance discovery of discarded American lifestyle magazines in the trash bin of an American hospital near his house, especially the photos and ads in them, opened a new world to Grod. It wasn’t until the 1970s that he began to collect such magazines in earnest and the flood of memories they brought back ultimately inspired this book. Based on his own collections and research done at various institutions, he presents here an organized look at war-related advertisements in mainstream US magazines from ca. 1942–1945 and also their creators. In particular he engaged in correspondence with illustrators Jo Kutula (founder of the American Society of Aviation Artists) and Ren Wicks.

Divided into two almost equally long parts, the first half of the book presents basic themes: flying (military and civilian), morale building, comics/cartoons, pin-ups/insignia, photography, and women in aviation. This part of the book contains large sections of narrative in order to put the illustrations into context. At 9 x 12” the pages are large enough to allow a generous layout. Many illustrations are full-page and each is extensively captioned and lists the magazine it appeared in and the date. The second part presents “The Battalion of Artists” in alphabetical order, introducing each artist with remarks about training, technique and professional accomplishments, and shows representative examples of their work. Artwork whose creators are not known is bundled into a separate chapter.

The artwork captures the entire gamut of war-related activity, from war bonds to aluminum recycling and combat flying to homecoming. Throughout, the author reminds the reader that this book is not meant to be a catalog of advertisements but a tribute to a way of life. Having it compiled by a “foreigner” should add particular poignancy for American readers, not just in terms of general cultural commentary but also the difference of perspective in experiencing the war—and liberation—first-hand as opposed to half a world away.

There is no Index but two pages of Appendices list magazines (general interest, aviation, aeronautical constructors), illustrators by name and dates, and commercial brands and their ad agencies. Although this is a French book, the Bibliography lists mostly English-language titles. Considering the physical qualities of the book (paper, color, printing, binding) the low price looks like a typo!