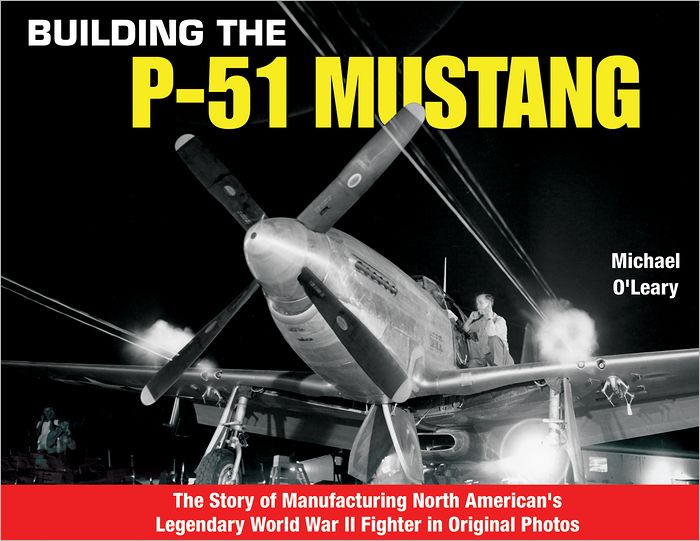 “A long time ago, aircraft companies were comprised of people who loved what they did. Today, unfortunately, the few companies left are governed by a mean-eyed capitalism that places the accountant at the head of the line.”

So you own every book on the P-51 ever published. Good for you—that’s a tall pile. As the author of this one says himself, “the world of aviation literature is not exactly lacking” when it comes to the Mustang, one of the most competent American aircraft of its time. Originally developed by North American Aviation for the British RAF (the book explains why) its relatively simple design allowed for a one-per-hour production rate at peak times; its combination of speed, range, maneuverability, and firepower gave it dominance in the skies; and its ability to fulfill multiple roles—dive-bomber, bomber escort, ground-attack, interceptor, photo-recon, trainer, transport, and postwar high performance racer—made it uncommonly versatile. No wonder much has been written about it. And still you’ll want this book.

All the operational and technical treatments relegate one particular aspect to introductory comments, or sidebars and footnotes: the actual bolting-together of the plane on the shop floor. Housewives and farm boys had to be trained up to help churn out almost 15,000 of these planes. Here, this is what the whole book is about, virtually placing you, as the book jacket says, “right next to the factory workers assembling subcomponents, wiring harnesses, engine mounts, and machine guns.”

While this would be interesting enough—if anything there should be more of it—the book also manages to dispense an enormous amount of background about the plane’s development, performance, variants (even the USAAF fighter ski program), and functioning. A large number of sidebars explore other pertinent tangents such as costing and crating, engine innards, change orders etc. Not even paint codes escape scrutiny.

Most of the 350+ photos in this landscape-format book have not been published before and have been culled from an archive of many thousands. While the book is dedicated to “all the men and women who designed, built, tested, and flew” the P-51, one of the men at the heart of the quote above is Gene Boswell whose long career with NAA has made him the unofficial company historian and keeper of much of the sort of material that has found its way into this book and that he has always been eager to share. O’Leary, with a long list of aviation publications to his credit, himself possesses a very extensive personal archive. For two decades he edited Air Classics and Warbirds International magazines and he has a long-standing interest in this particular aircraft. All this translates into a singular ability to have a large frame of reference from which to make a meaningful selection of images for this book that is truly different from others. Several NAA principals have contributed insights and material, and a long list of aviation historians have had their eye on the “bolting-together” of this book

Both Allison and Merlin Mustang production is covered, at the California and Texas plants. The photo captions are very detailed and many of the actual assembly photos invite up-close study with a magnifying glass! Most are of extraordinary quality and reproduced here with excellent detail and sharpness. For modelers too these images will be an important resource.

Appended are a description of variants and their specs, NAA model designations, serial numbers, contracting particulars, a one-page tabular listing of key specs. There is a Bibliography; the Index is rather light.

So, the focus on material that other books relegate to footnotes elevates this book to be anything but a footnote to the P-51 Mustang history. To say it even stronger: this book has such breadth and depth that it is a proper stand-alone, well-rounded design/development history. Add to that an uncommonly low price and you better run to get one while you can!