One Off: The Roads, The Races, The Automobiles of Toly Arutunoff 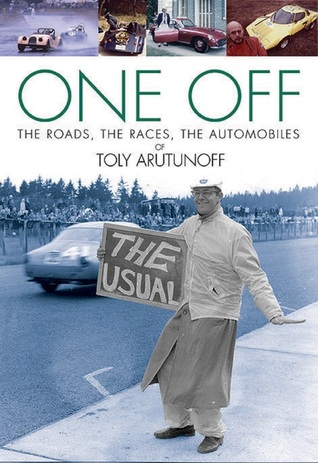 If you don’t love cars or women or racing—and ideally all three—this book may be lost on you or, worse, irritating because it is, well, bombastic . . . loud . . . over the top. Which is just as the writer intends it. Is this a tall tale? Can one man really have lived this life?

Well, first of all, he’s not done living it yet. Secondly, yes, he has/is—out there in full public view so there’s no way to really fudge it. Embellish he might but, fantastic as they seem, the deeds and misdeeds of this sportsman, racer, raconteur / comedian are as read. If anything, there’s more. . . . (There is in fact a sentence in the book about a story that had best be told in person, inviting the reader to “come by for a drink sometime.” He probably means it, too.)

If you know nothing about the man it would be easy to read a few pages of this book—and dismiss it as an act, a show, hyperbole. But consider: it’s easy to sing a merry tune when all is swell but then fall apart when things go south, right? Anatoly “Toly” Armaisevich Arutunoff, in a way he surely never imagined, can lay that one to rest, but to explain we have to fast-forward to the present day, a few years after this book was published in 2009.

A racer for decades, Arutunoff is a fixture in SCCA circles (won the 1981 national championship), a veritable legend with a trophy case to prove it. En route with his wife to an SCCA convention in the winter of 2011, he pulled over to help a stranded motorist. Another vehicle struck him. He lost both legs, one amputated, one shattered. Will the funny man now show his true colors? What cloth is he really made of? “I did manage to lose about 20 pounds by being unconscious for so many days—not counting the missing leg!” is what he says.

So, like his stories or not, but don’t say that talk is cheap.

In this book he presents himself “not [as] a writer but a talker who can type.” This is true. There’s a sort of stream-of-consciousness way of going about things and, while autobiographical, the book is neither a blow-by-blow chronology nor even does it contain the sort of detail or background a reader will inevitably wonder about when trying to grasp how a young man (there are hardly any dates either so you have to extrapolate) is able to just go and buy himself a brand-spanking-new Lamborghini Miura. He does tell you somewhere early on that his family has a background in oil but that he was the first Ferrari dealer in Oklahoma—and later Ford, Saab, Saturn, BMW, Volvo, Mazda, Sterling, and Honda shops—is something you have to piece together yourself.

That oil “background” actually explains quite a bit more than just the money jingling in Toly’s pocket. He also is simpatico towards things mechanical, not least, one should think, because Arutunoff père held 90 US patents, built the first centrifugal pump while living in Germany and the first submergible pump and motor in the US. No one would even consider his inventions until friends at Phillips Petroleum Company encouraged him to form his own company in exotic Bartlesville, Oklahoma—with the result that by 1938, 2% of all oil extracted from the ground in the US by means of “artifiical lift” was pumped by his REDA Pumps (REDA = Russian Electrical Dynamo of Arutunoff).

He started racing in the late 1950s, the days when you got your SCCA license just for buying a certain kind of car. From no-name racetracks to the Targa and the Mille, not to mention owning his own track, he’s been around. And around. His personal car collection is as quirky as he is and includes a number of one-offs—as he is.

Elsewhere on SpeedReaders we reviewed a book that came with a recommendation what kind of wine and music would best enhance the experience of reading it; this book says it’s too bad it can’t ship with “a few little packets of Castrol Racing R” for creating just that certain ambiance.

It’ll entertain plenty even so. The copy I have in front of me is inscribed: “I didn’t write it all at once, but you can read it all at once. Or not . . .”

If nothing else you’ll learn how to pee out of a moving car. And who but Uncle Toly would give you that, eh?

One Off: The Roads, The Races, The Automobiles of Toly Arutunoff