Porsche, A History of Excellence 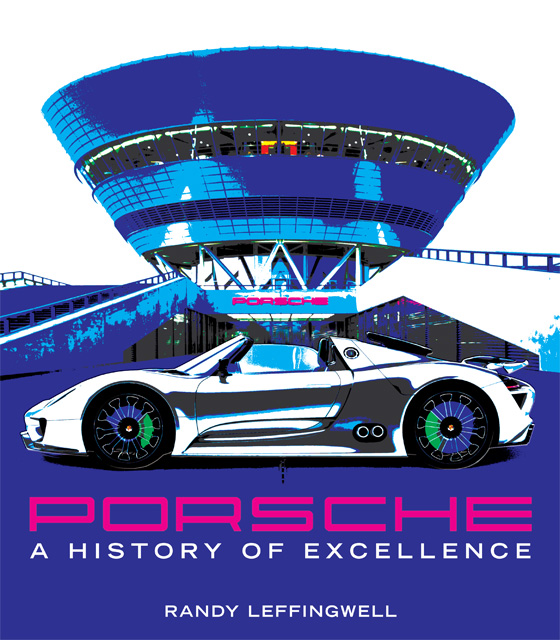 First published in 2008 in hardcover form, this book takes a fairly thorough look at the history of Porsche’s road and racing cars. The publisher, Motorbooks, routinely re-issues successful books a few years later, with a different binding and a reduced price. Over his many years of writing about the marque Leffingwell has developed deep and lasting relationships with those people at Porsche who know what archival and insider material they keep squirreled away behind doors that usually remain closed—and open only for some writers.

Obviously, open doors and company support can be a two-edged sword. Leffingwell is about to have a fairly unique opportunity to balance unfettered access with journalistic independence because none other than Dieter Landenberger, the Manager of Porsche’s Historical Archives and co-director of the Porsche Museum, has asked him to produce the definitive official history of Porsche’s motorsports activities. It is to be published in 2013 by David Bull and you can follow its progress online. Start saving now! This is an opportune moment to remind the reader that Karl Ludvigsen’s in every regard epic opus Porsche: Excellence Was Expected, The Comprehensive History of the Company, its Cars and its Racing Heritage (ISBN-13: 978-0837602356) has for over 30 years been the benchmark for this topic since its introduction in 1978. Its last update, in 2008, added more pages than many other monographs contain in toto and at now 1688 pages in 3 volumes is unlikely to be bettered in terms of scope and detail.

It may be nothing but coincidence that the publisher released Leffingwell’s present book with a title that seems, ah, inspired by Ludvigsen’s. The 2008 edition had been called Porsche: Sixty Years and you might deduce from the passage of time and the fact that this new edition has a different cover and title that the present book is updated or revised. Not so. The cover car, the 918, didn’t exist then but the book says nothing about it or any of the other models (cf. Panamera), variants (cf. Gen. 2 911), or new technologies (cf. the DFI engine or PK transmission) that have come about since. This is not a fault or a flaw (and the author usually has no involvement with a reprint anyway), just something the reader needs to know. The 2008 book was about as current as it could have been at the time although it recycled some material from a still earlier Leffingwell book, 2005’s Porsche 911: Perfection by Design. And, it can’t hurt that anybody who is anybody in the Porsche world allowed their good name to be listed on the Acknowledgments pages.

The present book begins with a brief look at Ferdinand Porsche’s life and the philosophy behind the kinds of cars he wanted and was asked to build. All models and variants are described, their pros and cons and quirks and strengths, how each is an answer to a question. Granted, it may not be purists who are asking the Sport UTE or four-door question and decry these models as a dilution of the focus, but there is a reason all Porsches are Porsches and not BMWs. Or Cadillacs. Aside from anything else, Leffingwell’s Porsche books really bring out the essence of the marque—Porsche owners will feel smart for already owning one and aspirants will take one step closer to wanting one.

This particular book is relatively light on technical details or specs. They are woven into the general narrative but the emphasis is on overall development, the marque’s place in the market, the symbiotic relationship between racing/rally and road cars, and the rather uncommonly uncompromising adherence throughout the decades to build a particular kind of car.

Photographically the book is very satisfying. Even if you already have a stack of Porsche books you will find lots of new material here, not just among the archival images to which, in theory, any researcher who knows the secret handshake has access. Leffingwell is also a photographer and many of the photos in this book are by him. All photos have detailed captions but are not individually credited. Period and modern (undated) photos are freely intermingled and the question does present itself whether a viewer might not be confused by not necessarily being able to tell which is which. Particularly with the racecars such ambiguity is not helpful when, say, a certain car is shown at a dated, identifiable event and then the same car (or model) is shown on the same spread but in a photo from years or decades later. This will mainly be an issue for the reader with specific research needs and doesn’t affect the flow or cohesiveness of the book in general. You will find the Index commendably detailed—once you dial in your eyeballs to read 4-point type.

Those among our readers who design and manufacture books ought to ponder two features of this one. [1] The typography on the Table of Contents [look especially at the entries for chapters 9 and 10] is highly unorthodox—but is it effective? does it fit the book? [2] A flexibinding has thin cover boards; if they are larger than the bookblock (as opposed to flush with it) they cannot support the weight—they buckle, the corners wear through, and the whole effect is decidedly lowbrow. Discuss amongst yourselves.

If you are not a Porschephile but you think you’ve heard Leffingwell’s name before, fear not, your mind is not playing tricks on you. A good number of his 40+ books are on non-automotive subjects. Coming from a newspaper background, Leffingwell considers himself a proper professional journalist, a gun for hire as it were, who can bring the same level of research to any project he’s assigned. We can’t opine on the quality of his Wine Country or American Barn books but if they are written with the same affinity for the subject and sincerity as his Porsche books then they ought to be good too.

Maserati: Italian Luxury and Flair »
« James Allison: A Biography of the Engine Manufacturer and Indianapolis 500 Cofounder