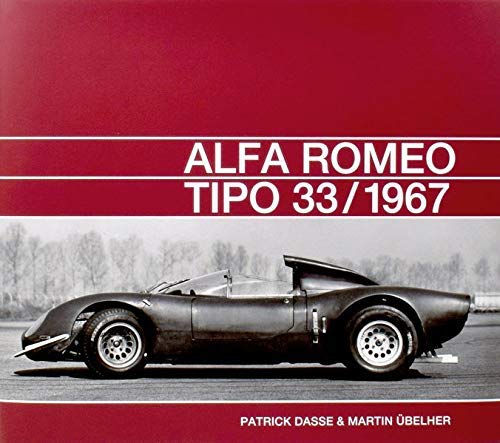 “Although we had already considered publishing a book about the Tipo 33 before this fantastic discovery landed in our hands, we had banished the idea from our minds. We thought it far too risky to base our work on the words of the racing drivers  of the time who, with all due respect, were far more likely to have been focused on driving the fastest car than which chassis numbers belonged to which car. Even more worrying was the prospect of incorporating into our research the many and various rumors about the race history of the cars.”

(English / German) The World Championship-winning Tipo 33 was an important race car for Alfa Romeo, competent in its day (1967–77), and is still breathtakingly good-looking. If you have already been interested in it you will surely have a well-thumbed copy of Peter Collins and Ed McDonough’s 2006 book Alfa Romeo Tipo 33: The Development and Racing History on your bookshelf. That book was the first to explore the subject comprehensively and has remained the only one, the Dasse/Übelher tome we are reviewing here being an entirely different sort of book. If you are familiar with Dasse’s multi-volume photo books about the Alfa Romeo models in the Tipo 105 series you would be correct in assuming that this Tipo 33 book will be mostly photos, most of which never before published, accompanied by precise albeit short photo captions. It is just that but also a whole lot more.

First of all, it contains quite a bit more narrative than those other books, which is surely related to the second reason this book is a standout, the “fantastic discovery” alluded to in the quote above: racing in the Alfa Romeo universe involves a company called Autodelta, and for years it had been considered gospel truth that Autodelta had kept few and shoddy records, and that all the important hard data about the who/what/when without which and car historians fly blind never had or no longer existed. Not so . . . Dasse, whose home away from home seems to be Alfa Romeo’s Centro Documentazione in Arese, Italy, was during one of his research trips turned by the center’s manager Marco Fazio to a room full of never cataloged material, including Autodelta records. As the Forewords, one by Dasse and one by Autodelta technical manager Gherardo Severi, make clear, Autodelta couldn’t possibly not have kept records because, during this era, Alfa Romeo owned all its shares, and since Alfa Romeo was state-owned and thus accountable to the Italian government, so was Autodelta required to leave a paper trail of its corporate doings. Aside from regulatory filings, which would really not yield useful detail to a car historian, Alfa Romeo’s board would have obviously asked for frequent and detailed briefings as to how their money was being spent: which cars, which drivers, which parts, which races, which results, what is the competition up to. And that sort of data allows, at last, for instance, the identification of cars in photos. The authors consider it “free of any doubt” but also point out that early cars such as development vehicles or auto show cars remain largely unidentifiable, as do the ones operated by Alfa’s French representative SOFAR with whom Autodelta settled accounts directly. Even with gaps in the data trail,  previous authors could only dream of having access to any of it. Collins/McDonough had lamented that while their book did contain the “sum of the world’s knowledge,” corralling it often left them feeling “it might have been easier to find, explain and build a replica of the Holy Grail.” Their book, incidentally, was to have had a second volume “if ever sufficient clarity can be achieved as to chassis plates.” Dasse/Übelher—and of course the good dottore Fazio—to the rescue! 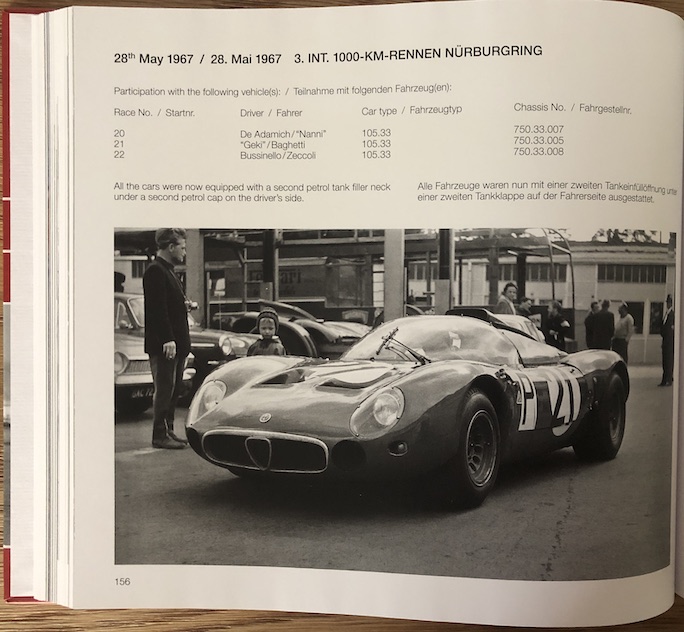 Speaking of second volumes, this Dasse book of 2018 was to have had one too, slated for a 2019 release. It has been delayed until 2021—thanks, Covid !@#$%—and will cover the 1968 racing season. There may, in fact, be additional books to come, one for each subsequent racing year. Also covered here is the Alfa Romeo 33 Stradale (below), a road car one might well consider one of the world’s first supercars. Even the only slightly related and surely very little known Giulia OSI Scarabeo (also below) that never made it into production is presented.

After laying out the development story of the prototypes the book discusses each month of 1967 individually, in 16 entries. The authors wring enormous breadth of detail from the photos—and more, more, more can be discovered. The already well read observer will come across a plethora of faces and places that fit into all sorts of other contexts so the photos, all of which are of the period, ought to have wide appeal. As in all books by this publisher, photo reproduction and production values are top notch.

If, in this Alfa Romeo context, Martin Übelher’s name rings a bell it may be because he had teamed up with Dasse for their epic 2012 overhaul/reimagination of Tony Adriaensens’ most unusual Alleggerita.