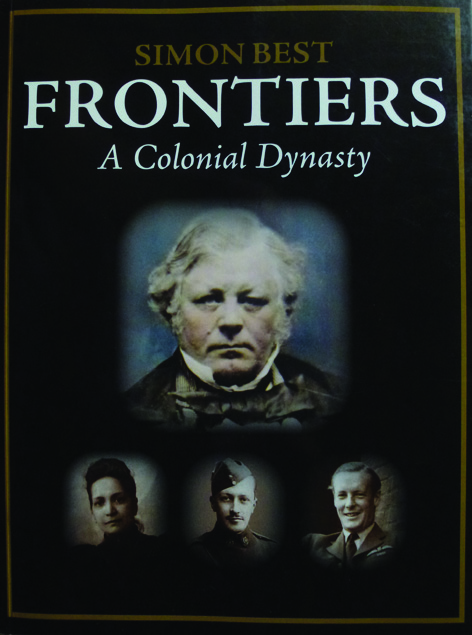 This extraordinary story spans four generations and covers New Zealand’s earliest colonial history, ownership of Rolls-Royce cars, friendship and business partnership with one of the most important motorsport characters of the pre-WW I era, early flying, Maori ancestors, and the awarding of the first aviation Victoria Cross—Britain’s highest award for bravery—just at the time of the disastrous Gallipoli Campaign almost a hundred years ago.

Who better to write such a book than Simon Best, whose own life’s occupations alone could be described as “extraordinary,” comprising in chronological order: two years National Service in the RAF as an aircraftman before emigrating to New Zealand, a year contract fencing in the Wairarapa and another in Northland, two years as a New Zealand Forest Service hunter, one year as a New Zealand Broadcasting Service copywriter, four years as a crocodile shooter in North Australia, and 35-odd (very odd) years as an archaeologist in New Zealand and the Pacific? Many people have dabbled in research on this subject, but Best has seen his project through to completion, at his own expense. It is a great achievement. The amount of research, including six trips to Britain, which has gone into Frontiers is formidable; there are 12 pages of Bibliography, 48 pages of Notes, and a good Index.

William Barnard Rhodes (1807–78) was a Yorkshireman who went to sea at an early age, and by the age of 25 he was master of his own ship. He sold this ship when in New South Wales and bought land there, but in 1836 was offered the command of the barque Australia for a whaling voyage to New Zealand. In those days New Zealand was a lawless group of islands, with the main European inhabitants being itinerant sealers, whalers and traders from many countries, before semi-official colonial settlement by the British, and the Treaty of Waitangi between Maori chieftains and the British in 1840. Rhodes never returned to England, but was eventually joined by three other brothers, who all prospered and became major land-holders in both islands; William’s intention was to sell off the vast areas he had bought from Maori chiefs in small portions to the European settlers whom he expected to flock to the new colony. The Rhodes brothers’ impact upon New Zealand is still to be seen, in plaques on early church walls, place names, and distinctive architecture on public buildings around Canterbury, bequeathed by Robert Heaton Rhodes.

William Rhodes married twice. His first wife, Sarah, died early after several miscarriages, and he married Sarah Ann Moorhouse, the daughter of another well known family in early New Zealand. Along the way he acquired a daughter, whose Maori identity was established by a researcher working for the Waitangi Tribunal in New Zealand. She was named Mary Ann Rhodes, born about 1852, and had as comfortable a childhood as the customs and mores of those days enabled her. She was an accomplished artist and musician, and in 1881 travelled to Europe with her stepmother. Both Sarah Ann and William were devoted to Mary Ann, but the Maori ancestry was ignored. Inheritance by a woman in Victorian times was somewhat tenuous, and Rhodes’s will included contradictions, but at a Privy Council hearing the will was resolved, leaving Mary Ann considerable wealth.

Despite family opposition, Sarah Ann’s older brother Edward Moorhouse (1834–1917) mended his wayward habits, and at the age of 49 was accepted by Mary Ann, to marry in July 1883 at St Paul’s Cathedral in Wellington. The next month they left New Zealand by steamship for San Francisco, train across to New York, and eventually England. Moorhouse’s main interest was fox-hunting, and the family’s life was spent among leased country houses and in London in the off-season.

Four children were born, and all acquired the Rhodes name, hyphenated with Moorhouse, in order to inherit the considerable Rhodes fortune. Here, then were four children, brought up in a secure Victorian environment, unaware of their Maori ancestry until they discovered it in 1908.

William Barnard Rhodes-Moorhouse was born in 1887, and was obsessed by speed, both on the ground and in the air. During a New Zealand visit in 1907 he raced a motorcycle along New Brighton Beach, near Christchurch, and killed a small boy. The family paid the dead boy’s family £250, and Rhodes-Moorhouse quietly left the country. He was involved in several scandals back in England, involving manslaughter while engaging in Furious Driving. A suggestion that he may have been involved in spying for Britain before the Great War is surely not credible, given his impetuous behaviour. After he married Linda Morritt (1886–1973), who had no less extraordinary a life, recorded in her memoirs Kaleidoscope (Arthur Barker Ltd., 1961), he settled down to fond fatherhood, and their son, William Henry Rhodes-Moorhouse was born in 1914.

W.B. Rhodes-Moorhouse, known to his friends as Will, came down from Cambridge after a time there as an undergraduate; he felt that time wasted, but made up for it by learning to fly, taking part in aviation competitions in Britain and Europe, building aeroplanes in partnership with his friend James Radley, and enjoying his Austro-Daimler racing car along with his two Rolls-Royce 40/50 hp, chassis 1571 and 2281.

With the coming of the Great War, Rhodes-Moorhouse was commissioned into the Royal Flying Corps, but his short life ended when he was fatally injured when flying on a bombing raid in France in his BE2C aeroplane on 26 April 1915, dying of his wounds the next day, and being awarded the first aviation Victoria Cross, albeit posthumously.

After his death, Linda and their son led a somewhat peripatetic life of flying, winter sports, and big game hunting, before W.H. Rhodes-Moorhouse married in 1936. He bought a 4 ¼ Litre Bentley in 1938, and became a member of 601 Squadron of the Auxiliary Air Force, an organization of wealthy young pilots. Despite his combat experience and the awarding of a Distinguished Flying Cross, his Hawker Hurricane was shot down, and he died on 6 September 1940.

It is a sad story, but told dispassionately and well by Simon Best. The descendents of W.B. Rhodes-Moorhouse’s siblings have set up a charitable trust, the W.B. Rhodes-Moorhouse VC Trust, which, together with the Rhodes’ Wellington College Scholarship, provides help to students of flying and engineering, as well as to the RAF Benevolent Fund, and the Blond McIndoe Centre of East Grinstead, in England, which continues Sir Archibald’s burns research.

The close links between Britain and New Zealand, despite the 12,000 miles and many weeks then separating them, are well demonstrated, and this important book will be of interest to many of us with interest in history, both social and automotive.