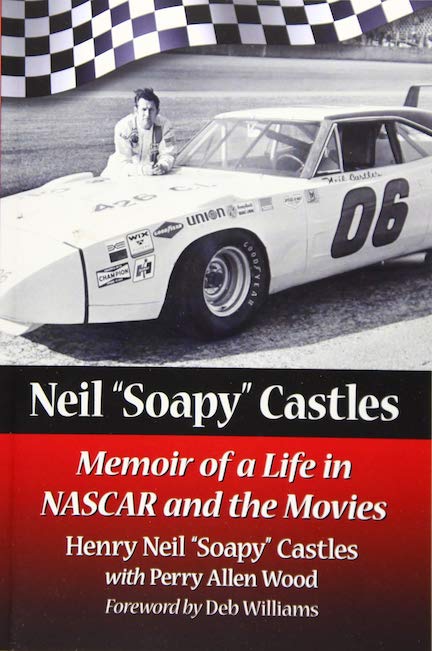 Life places before each of us a set of experiences. Sometimes we think or feel we have some control over the events of life. Other times, we’re left gasping, struggling to cope. This book is about a man who has met all that life has put in front of him with admirable internal personal strength.

Earning the nickname “Soapy” early on (you get to discover how and why by reading the book) it has stuck with Henry Neil Castles his entire life, on and off the track. Though it may be a “goofy” sounding nickname, if you start at the back of the book you’ll find a closing chapter in which his three now-adult children record their thoughts about their father. It’s instructive and illustrates, as have the pages of the 204 that have preceded it, that Neil “Soapy” Castles is more than the subtitle, a Memoir of a Life in NASCAR and the Movies, suggests.

This is a guy, now in his mid-80s (b. 1934), who has twice battled (and prevailed over) malignant brain tumors and who never completed high school and won only two NASCAR races during a one-year-less-than-twenty-year career, during which he started in just three races shy of 500. Throughout those years, he had just over 50 finishes in the top five and just under 180 top ten finishes. These were the years 1957–1976 when Neil was ages 22–41. Racing was his job, his work, how he supported his wife and children. That today his net worth is in the multiple millions is a testament to this being no ordinary man and his book is certainly not everyman’s story.

All credit for bringing Castles’ story to a broader audience in book form goes to co-author Perry Allen Wood, a self-admitted NASCAR fan, for as he writes, “My father was a Spartanburg, South Carolina city cop. He knew all the drivers and mechanics in town. My earliest memory from when I was three and a half is being with my mother when the Flocks, Tim and Fonty, finished one-two in those big white Kiekhaefer Chryslers in a 100-miler.” Having been born in the land that spawned NASCAR and being at races and around the people who raced and attending races his entire life, Wood has the regional cadences, patterns, and words of speech down pat. He uses them admirably, especially in the opening chapters of the book, as he writes from interviews recorded with Castles.

The reality of Castles’ life is that by the time he was ready to cut back on racing, another career awaited him. Over the years he had proved particularly adept at finding vehicles the movie industry wanted and finding them timely. Another plus were his driving skills and it wasn’t long before the movie industry had him not merely finding cars but driving them on screen and where applicable consulting on set design in order to “get it right.” He became a full-fledged card-carrying SAG-AFTRA member working on both movies and television programs and filling the role of transportation coordinator for many—a profession into which his son, Neil Jr., has followed him with great success.

With his affable ways, Castle became friends with many in that industry including Andy Griffith, Ron Howard, and others. Shows and movies where you can find him stunt driving and even with acting and speaking parts—and screen credits too—include ”Matlock” with Andy Griffith, “Leatherheads” that starred George Clooney, “Last American Hero” featuring Beau Bridges, and others.

As a kid with a newspaper route and with one of his deliveries to a repair shop, Neil started hanging around whenever he could. His natural curiosity and native intelligence meant he learned quickly. By the time he was an adult his automotive repair and innovation skills were considerable and continued to grow with experiences. There’s a 2006 interview posted on the web where he even reveals some of the “creative engineering” those skills enabled him to create while racing.

Early in the1990s Neil and wife Jean bought a building and an adjacent house with plans for it to be a place for Neil’s race memorabilia, cars, and equipment and where he could continue to work on cars and trucks. But shortly after escrow closed, the lady across the street was complaining that her water was contaminated, smelling and tasting of gasoline. Turns out Exxon had owned the property at one time and had repaired their airplane refueling trucks on the property, spilling or releasing a considerable amount of fuel onto the grounds.

Longer story short, after lawsuits Neil and Jean finally prevailed in the courts but Neil was also told that in the time he had spent in that building he “had breathed enough fumes to have developed a stage four cancer.” As you read earlier, Neil prevailed over the cancer but, as the book’s closing pages reveal, he is now caring for Jean, his wife of 60 years; as mid-twenty-teens she was diagnosed with Alzheimer’s.

Yet the book ends on a positive note as mentioned at the outset with very positive thoughts penned by Neil and Jean’s two daughters and son. And overall, Perry Wood has managed to relate the elements and events of Neil Castle’s life very well in this fast-paced read.