Tatra, The Legacy of Hans Ledwinka 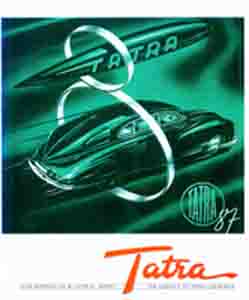 Who actually designed the original air-cooled volkswagen? Was it Ferdinand Porsche, or was it a Tatra creation appropriated by the Nazis? This book gives you the Tatra side of the story. It also gives you an incredible look into the design mind of Hans Ledwinka, chief designer for Czechoslovakia’s Tatra, a car, truck, aircraft, and railcar manufacturer founded in 1850. Tatra built its first car in 1897, and is still in business today making trucks.

Without a doubt, Hans Ledwinka (1878−1967) ranks right up there with any of the early mechanical innovators who designed/invented all the basic car/truck/aero gas engine and chassis variations still with us today. Swinging half-axles, air-cooling, rear engines, backbone frame chassis, mono-block engines/transmissions, and the serial production of streamlined, low Cd monocoque−bodied cars were all design elements utilized and refined by Ledwinka.

According to Ledwinka’s son Erich, Adolf Hitler was a Tatra enthusiast who, in a late-night session with Ledwinka, formulated the basic Volkswagen design for Porsche to follow. The design parameters were based on Tatra’s 1931−33 air-cooled rear-engine prototypes, along with the rear-engine 1936−39 T97, a small car with an opposed four-cylinder, air-cooled 40bhp 1.75L power plant. The T97 also featured independent suspension and hydraulic brakes on all four wheels. Despite being designed at Tatra for inexpensive mass production, only 508 of the T97s were produced. Comparing photos of a 1931−33 Tatra TV570 prototype and the 1932 Porsche Type 12 show great similarities in design, with the streamlined Tatra looking more like the final Volkswagen production model.

Ferdinand Porsche recognized good ideas and always appreciated small cars in general and clever engineering in particular, so it’s a compliment when someone like Porsche improves upon the basics of a good idea. Without doubt, Hitler’s volkswagen was designed by Porsche, but successful proof-of-concept air-cooled rear engine cars were manufactured by Tatra years before the VW production model ever saw the light of day.

After the end of World War Two, DM 3,000,000 was paid by Volkswagen to Tatra to compensate for VW’s unlicensed use of Tatra’s patented designs. Although Hans Ledwinka received no money himself, he agreed to remain silent on the origins of the volkswagen concept. In 1945 he was accused by the Soviets of collaboration with the Nazis and put on trial. Acquitted twice, Ledwinka was eventually convicted and imprisoned for six years. In 1951 he was released and moved to Vienna, then Munich, where he died in 1967 at age 89, his radical air-cooled rear engine cars all but forgotten by the motoring public outside the Iron Curtain.

The book contains a Foreword by Ledwinka’s son Erich (himself a car designer from 1930−75 for Tatra and Steyr-Daimler-Puch) and short appendices on Chronology, Technical Information, Bibliography, Index, and Acknowledgements.

Both authors are architects, one an expatriate Czechoslovakian (Margolius) and the other an Irish-born Royal Automobile Club member (Henry). Their mutual interest in innovative car design produced this fascinating study of a company that followed design paths attempted by few others in the history of the auto industry. At times they seem too eager to prove their points about who invented what when, and how blindingly superior Tatra designs were compared to all the other contemporary car companies. The strain to have Tatra be best at everything begins to show, diminishing their arguments.

The photos are generally washed out and frequently appear to be copies of copies. What the photos reveal, however, is well worth seeing. It’s also unfortunate that the book does not cover in more detail the wide range of products manufactured and sold by Tatra, including airplanes, commercial trucks, military vehicles, and railroad wagons. Their advanced line of swing-axle commercial trucks, starting in 1923 and continuing to the present day, could justify a stand-alone volume. Heavy-duty swing-axle suspensions, air-cooled gas and diesel engines, and the 1988 win of the Paris–Dakar Rally by a Tatra air-cooled 18,000-pound 4×4 815 truck all deserve more attention than they receive here.

This is, however, the only book in English covering the Tatra story from the beginning, so we need to be grateful for that, and hope that somewhere down the road more information about the company becomes available. Won 1991 SAH Award of Distinction.