The Silverplate Bombers: A History and Registry of the Enola Gay and Other B-29s Configured to Carry Atomic Bombs 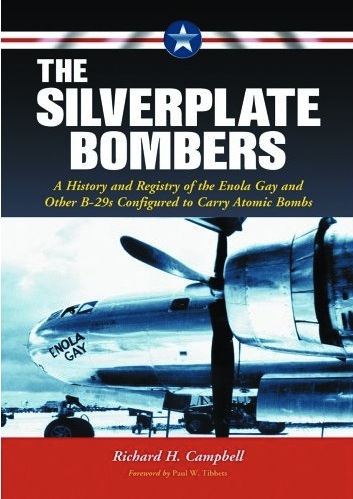 Nicknamed after the codeword for the project (a shortening of the original moniker “The Silver Plated Project”), B-29 Superfortress bombers in Silverplate configuration were the first planes ever to carry nuclear payloads. Of the 65 planes so modified between 1944 and 1947, 53 served with the first nuclear weapons unit, the 509th Composite Group. Two survive to this day and their names—Enola Gay and Bockscar—are inseparable from a pivotal and infamous chapter in human history, the dropping of atomic bombs on the Japanese cities of Hiroshima and Nagasaki that contributed to ending the war by causing incomprehensible damage.

“The B-29 has as many bugs as the entomological department of the Smithsonian.”

—Curtis LeMay, who commanded B-29 combat operations against Japan

Written by a military man and staying away from the moral dimensions of the story, this book is the first to examine this particular modification in detail, covering conception and development and then operational service with the 509th Composite Group at Wendover Army Air Field, Tinian, and Roswell. Also discussed are the Los Alamos test program, airbases, crews, accidents, and various classes of atomic bombs carried.

The book was spawned by a commemorative booklet compiled by a former airplane commander for the 50th anniversary reunion of the 509th in 1995 and an updated version in 1997, both of which manifested that the complete story hadn’t yet been told, that there was material “out there” for research, and that someone had better do the job while eyewitnesses and other contemporary sources were still around.

It was a display of nationalism by US General Leslie Groves who thought it “beyond comprehension to use a British plane to deliver an American A-bomb” (he wrote his own book, Now It Can Be Told, still in print in many different versions, even a Kindle edition) that tipped the scales in favor of the B-29 being selected over the British Avro Lancaster. While the B-29 was sophisticated for its day—fully pressurized crew compartments, trick bombing radar, remote-controlled gun turrets with computing sights—it cost a staggering five times as much as a Lanc, over $500,000 apiece, which also would have been much easier to modify. It may well be said, and this book certainly leans in that direction, that the Silverplate program redeemed an otherwise problematic (in terms of performance, safety, bombing accuracy) aircraft that had failed to live up to expectations in its role as conventional high-altitude daylight strategic bomber and had been only provisionally successful as a low-altitude nighttime fire bomber.

The book does an excellent job of describing the technical issues of the 6000 man-hour modification to the aircraft to accommodate the specific requirements of a nuclear bomb. Unless it is your job to think about such things, there’s much here that is not obvious: the bracing of the weapon in the bomb bay, how to release it etc. Einstein himself thought that “this type of bomb might very well prove to be too heavy for transport by air.”

Despite bristling with data (operational—cf. dates, personnel, serial nos.—rather than technical) the book remains easy to read. Two War Department memos shedding light on the Japan mission are reproduced and Campbell talks about the third, ultimately unused atomic bomb, the plutonium capsule. Also addressed is the parallel Saddletree project that would have converted further aircraft to carry atomic bombs. Many of the never before published photos come from the private collections of former crewmembers. The Foreword is by Paul W. Tibbets who, then a Colonel, had organized and commanded the unit tasked with dropping A-bombs on Japan and Europe and who piloted the Enola Gay on the Hiroshima mission.

Seven Appendices make up almost half of the book and their contents elevate the book to the level of a serious reference work. They include a chronology of events surrounding the Silverplate program, the Manhattan Project, and the 509th over the decades. The years covered are 1938–1993 but its primary focus is on the years up to the 1950s. Also presented are detailed lists of B-29 missions out of Tinian in 1945, extensive crew information with photos, a Project Alberta personnel roster and project history, and, probably of the greatest value to both the B-29 historian as well as the general-aviation reader, a 50-page account of all Silverplate B-29s along with individual aircraft histories. This is followed by detailed Chapter Notes, a good Bibliography, a separate Index of serial numbers and then a decent general Index.

If you want to read more about the original, standard B-29s look no further than the same publisher’s The B-29 Superfortress: A Comprehensive Registry of the Planes and Their Missions by Robert A Mann.

Yesterday We Were in America: Alcock and Brown, First to Fly the Atlantic Non-stop »
« Automobile Design: Twelve Great Designers and Their Work