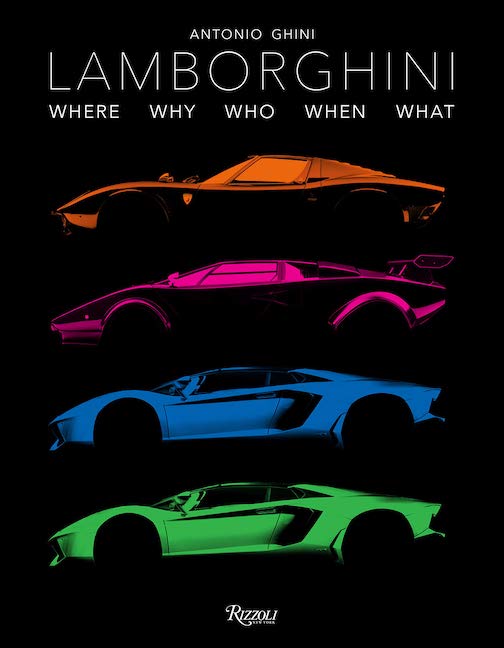 “Ferruccio Lamborghini was a pioneer of the Italian post-war revival by the invention of his tractors and companies, born out of nowhere in the wake of a rare talent. What does he have in common with the Terzo Millennio, the concept car Automobili Lamborghini has developed with MIT in Boston to show that there are no revolutions capable of subduing the passion for the car? What does the Miura, with its transverse rear engine and racing car body, have in common with the Aventador SVJ, capable of shattering the most difficult record for a road car on the Nordschleife of the Nürburgring? What links the reckless adventure of models so innovative as to be considered little more than curiosities and outstanding high-performance luxury vehicles like the Urus, capable of coping with every situation?”

With a subtitle like that, would you be surprised to learn that the author works in communications? Moreover, those very words are also the chapter titles so there really can be no question about what this book wants to accomplish.

And accomplish it does, which is never a foregone conclusion when it comes to “official” publications as this one is. (It doesn’t actually say that explicitly anywhere in the book but on the last page is an Automobili Lamborghini hologram sticker.) The involvement of the carmaker too often and too easily tips the scales, limiting the author from wandering too far from the party line. This book doesn’t shy away from the less successful moments in Lamborghini history, not that there are many anyway. That author Ghini himself used to be a professional brand and communications manager (Renault, Ferrari) only sharpens his thinking about the building blocks of brand identity. 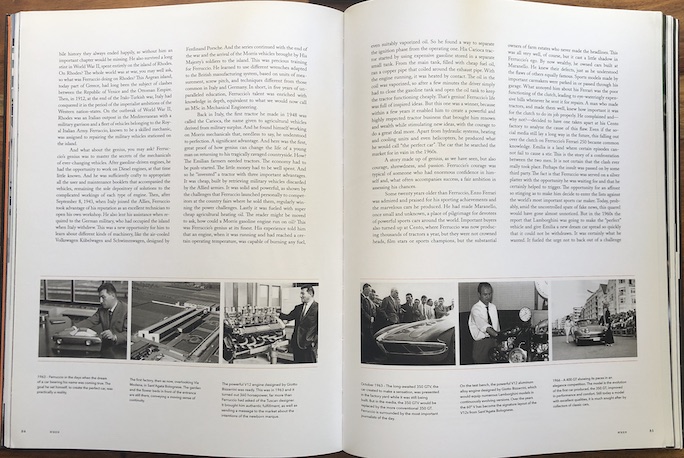 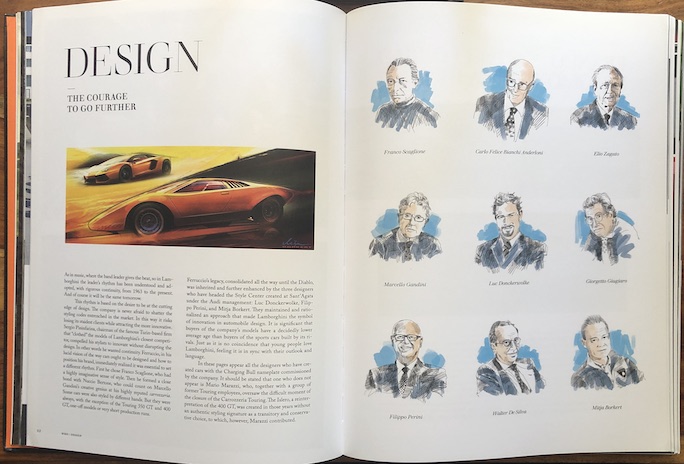 How clever is that—in a chapter about design, which relies on drawing, all the designers are rendered as drawings not photos.

And the brand clearly has a following, by which we don’t mean the people owning the cars—you don’t buy a Lamborghini because it’s the Thursday Night Special on the dealer lot but because a Lamborghini is the one specific car you favor over any other—but the millions, yes millions, of new Internet followers the firm gains in any one year. Ready for a big number? CEO Stefano Domenicali, in a very well composed Foreword, puts it at 35 million in just the year preceding this book (2020)! Only the tiniest fraction of those has the wherewithal to actually afford to buy—and maintain!—a Lamborghini (besides, in its best year yet, 2021, the company made just under 8500 cars) so you have to ask just what it is that piques the interest of millions? 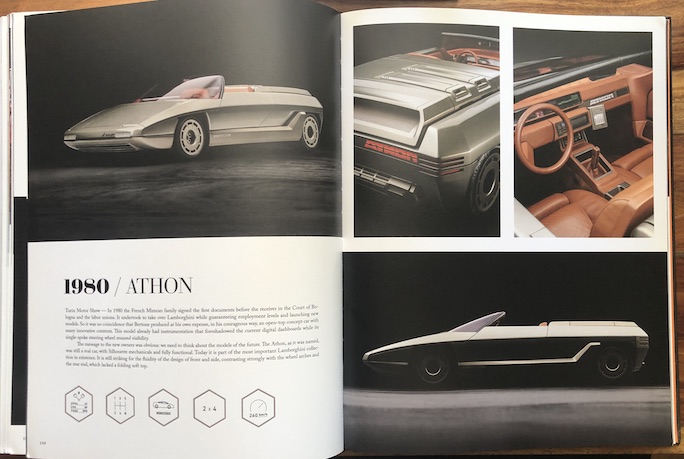 Above and below. Exotica. Not something you’d find in just any old Lambo book. 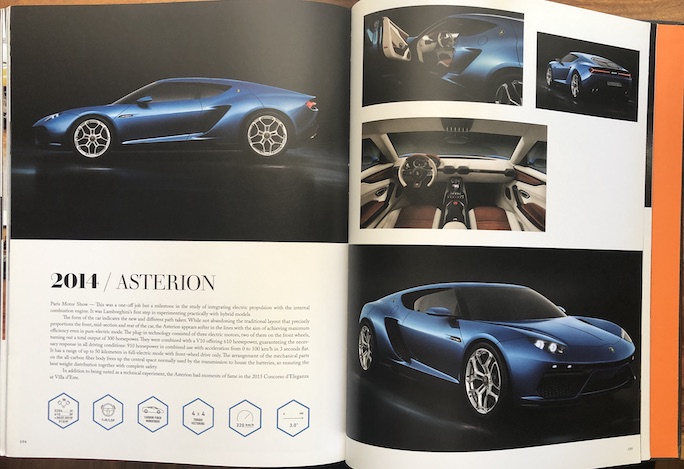 The five W’s are the obvious place to start. If you can’t already fill in those blanks on your own, this book has just the right level of magnification and breezy pace to make the subject approachable as well as being, relatively speaking, affordable ($85; or do you mean to spend some of your Bitcoin gains on Ghini’s $18,655 [not a typo] made-to-order opus DNA Lamborghini, 2nd Edition? The fact that there was already a 1st edition of this extreme category-buster is a puzzler right there).

The Who and the What chapters are the longest, the former discussing key figures in the now almost 60-year-long Lamborghini history and the latter presenting all cars, from the 350 GTV of 1963 to the 2919 hybrid technology Sián FKP 37 supercar (£2.5 million if you must ask) including even prototypes, special editions and one-offs as well as significant variations/evolutions of certain models. The cars are presented chronologically, each on one spread, mostly in photos and just enough text to convey basic developmental and technical highlights. The book is like a quick guided tour through a museum, not an in-depth context-laden appraisal on the order of, for instance, Gautam Sen’s much more scholarly Lamborghini: At the Cutting Edge of Design (2022). In other words, there is a book for every purpose, and this book meets its just fine. Attention is also given to engines, motorsports activities, and non-car projects.

With the exception of a few period photos all the imagery here is highly stylish, professional-grade. There is even a four-page foldout (above) which is remarkable mainly because it is a bit of production complexity that not every publisher would attempt or could afford—but then this is a Rizzoli book which always means “bells & whistles.” Also, the book design is crisp and, yes, sophisticated and original in ways that deserve attentive analysis. There is no Index and neither the Table of Contents nor any other place in the book list everything covered but in this type of book this is not really a demerit. 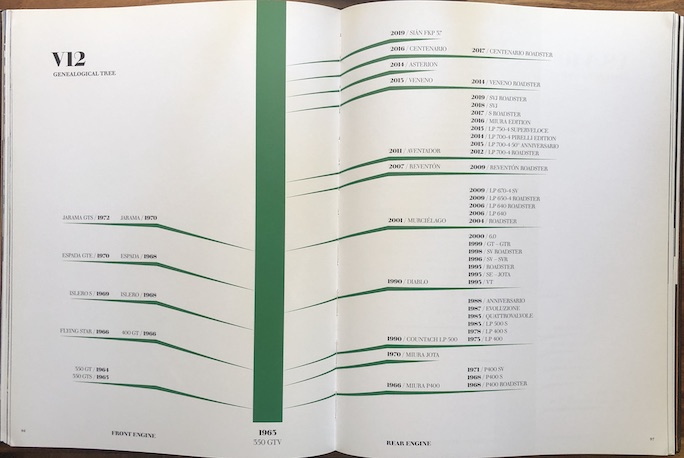 An example of a clever idea . . . that has limitations in terms of executing it: the leader lines on the sides of this family tree are in order of year, as one would expect (starting at the bottom). But you’ll have to figure out on your own that the left side (front-engined cars) is out of step/does not “align” with the right side (rear-engined) because the unequal number of models does not lend itself to such a linear treatment.