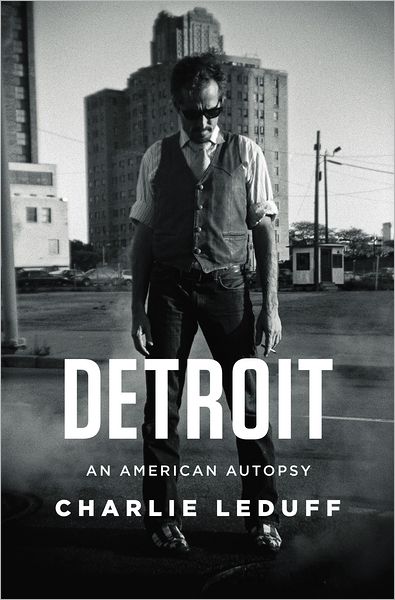 Detroit’s recent bankruptcy occurred shortly after this excellent book was published, but the bankruptcy’s inevitable approach is clearly evident throughout the text. The author, Charlie LeDuff, was an award-winning New York Times staff writer prior to returning to his hometown to take a job on the dying Detroit News. The dust jacket sums up what he found: “a hard town in a rough time filled with some of the strangest . . . people our country has to offer . . . a deeply human drama of colossal greed and endurance, ignorance and courage.” Once a city based on industry and commerce, Detroit now lives in deep-seated corruption that inhabits every facet of its denizens’ lives.

I have traveled to Detroit annually for approximately 35 years, and can affirm that LeDuff’s book is unflinchingly on the mark. If you want to know what living in Detroit is really like these days, this book will fill you in with humorous and noir tales of everyday municipal corruption and random death.

Although LeDuff writes about the political corruption in the city police and fire departments, the bulk of the book follows several stories of common people, including his own family, who linger on in a rapidly disappearing city. Once home to 1.2 million people, it has fallen to less than 700,000 today with no end in sight. As LeDuff points out, even the dead are leaving as families exhume their loved ones for reburial outside the city limits, while unclaimed bodies pile up in refrigerated trailers parked around the city morgue, waiting for burial by families who don’t have the money, or the interest, to pay for a funeral!

Senseless killings and random acts of violence fill the evening news. Abandoned homes burn nightly. Huge quantities of the city’s properties are abandoned, usually having been stripped of all reachable-from-the-ground up materials such as aluminum siding, bricks and copper electrical wire and plumbing. Detroit has become a fourth-world city located inside a first-world country. Where else can houses that sell for as little as $700 go unsold?

LeDuff does an excellent job of describing the chaos and disillusionment that pervades everyday life. What the author gives us is basically raw Detroit backed up with his hometown insider view of reality as seen by the inmates. Stories to break your heart. Stories that defy acceptable patterns of social logic, and stories that verify the goodness of man. Stress, tears, fears, and hope all mixed together. Until Detroit becomes a safe place to live and work, the downward spiral seems unstoppable.

In hindsight, the financial collapse of the city now seems unavoidable, given the depth of the corruption author LeDuff points to that helped drag the city down. Once beautiful, Detroit is now ugly. At one time self-supporting, the city is now dependent on the kindness of others. There is no “there” there anymore.

Although this book tells a depressing tale, is does it with enough humor to keep it from becoming a maudlin tearjerker. The complexities of entrenched corruption are described succinctly in LeDuff‘s easy writing style. The realities of living in that culture are portrayed accurately. It is not a pretty picture, but it is a real one.

My wife’s family originally came from the inner city of Detroit, starting around 1915, and still live there today, “across Eight Mile Road,” in a community previously named East Detroit, but now named Eastpointe in an attempt to distance itself from the rot and destruction of its namesake. When I first visited Detroit in the late 1970s I joked that I expected the city to be composed of pillars of smoke and distant gunshots. Upon arrival, I found my preconceived image of the city to be accurate. Sitting in the backyard with my in-laws we listened to a running gunfight in the parking lot of the Eight Mile Road shopping center about a quarter-mile away. My father-in-law was able to identify the three different police forces involved by the different sounds of their handguns. No big deal. Sort of like recognizing different bird calls in the country.

For an interesting 44-minute NPR radio interview with the author about this book, go to www.npr.org>Arts&Life>Books>AuthorInterviews, then search Charlie LeDuff. LeDuff is currently working as a television journalist for Detroit’s Fox 2 News.

Champion of the Lark »
« Rocks Off, 50 Tracks That Tell the Story of The Rolling Stones