Race to the Sky: The Wright Brothers Versus the United States Government 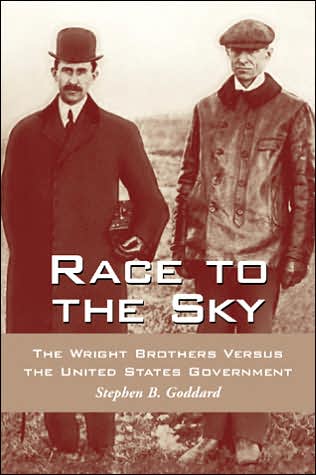 by Stephen B Goddard

It is positively exciting to think that only three short years lie between the Wrights launching an unmanned kite/glider, then strapping themselves to it, learning by trial and error how to control it, and then, in 1903, achieving mankind’s first powered, controlled, heavier-than-air flight. A new era. Pioneers. Giants among men. And it is exciting, to go from falling flat on your face to thumbing your nose at gravity for an exhilarating 59 seconds. But that same year, in fact seven months earlier, an obscure Russian teacher—later to be hailed as the Father of Cosmonautics—had already articulated, for the first time ever, the mathematics for achieving manned space flight using liquid fuel rockets.

News of this didn’t reach the West until 20 years later, and the two events really have nothing to do with each other—except to illustrate that the wheels of imagination and innovation turn quickly. Wherein lies a story; this story.

As one would expect of a topic of such singular historic import, there exists an extensive body of literature. The Wrights themselves were prolific diarists and recorders, there are piles of contemporary primary accounts—the Manuscript Division at the Library of Congress could keep you occupied for decades—not to mention reams of commentary written in later years. Published in the centennial year of those first flights at Kill Devil Hills, author Goddard feels that a key driver of those events, the US government’s “national crusade to achieve first flight,” is still not as well known or understood as another momentous government initiative, President Kennedy’s “Race to the Moon” program decades later.

What made the Wrights successful is that they identified the three crucial aspects of flight behavior and then devised means to manipulate them: pitch, roll, and yaw. While any modern-day pilot would struggle to work the controls of a Wright Flyer, it did work. And because it worked it was copied. And while imitation may be the sincerest form of flattery (is it? ever??), when money and reputation are on the line, things tend to get ugly. And because the Wrights went it alone, not taking government money because they feared the meddling it would entail, they found themselves not just alone when they needed to enforce their patents, they found themselves confronted by the might of the US government which in the name of national interests wanted everybody to play nice. There—that’s the book in a nutshell! And a fine, fine book it is.

The Wrights won their case. But nothing was ever right again. Goddard, incidentally, is not only a historian (check out his daily blog at HistoryWire.com) but also a lawyer (and taught public policy at Trinity College, Connecticut) and thus is able to combine particularly salient strands of the story. The book is very engagingly written—this is no legal brief but a veritable nail-biter! Lots of quotes from the Wrights and from other books, easy on the eyes, photos are credited, chapter notes bundled at the end, very extensive Bibliography, thorough but visually crowded Index. When you’re done reading you’ll be sorry it’s over. Encore!