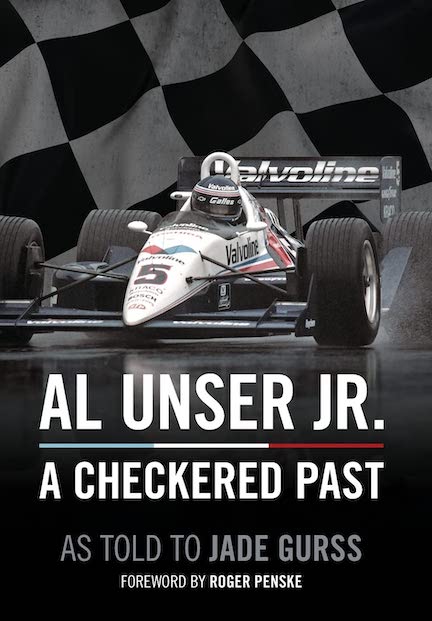 “I felt the texture of the handle, then picked it up.

Slowly, I raised the gun to my head. Tonight I was going to do it.

The gun felt heavy. Very fucking heavy. The tip of the barrel was cold on my skin.

By 2012 he had been retired twice already. He’d been inducted into two Halls of Fame, had filled big shoes in the family business of racing, had a “boisterous and beloved personality” and “fans and the press adored him.” In his own words, it would have taken years to count all the money he had made.

He’d also been divorced multiple times, was hated by his four kids, was basically broke, and become cosy with alcohol and drugs and had a bunch of DUIs to show for it. So much for the grass always looking greener on the other side of the fence.

It’s not meant as cheap sensationalism to start the review with the quote above. One word appears in the book a lot: Perseverance. But there is another word that has come to matter more to Unser in recent years: Redemption, a word with distinctly religious connotations—and therein is found the counterpoint to all that had gone wrong.

No wonder Jade Gurss begins the book with a Bible verse, from the book of Job, he of the seemingly endless and, in his case (although not in Unser’s), undeserved trials and tribulations that test his breaking point. For a long, long, too long time Unser kept his demons mostly to himself and certainly out of the public eye. He’s not the only one to have tried that route, and not the only one to discover it doesn’t lead into the light.

If you liked reading The Beast both this author and his protagonist are already on your radar. Central to that story is racer, entrepreneur, and Unser’s team owner for many years Roger Penske who wrote a most fitting Foreword here. Gurss has worn/is wearing many hats in his professional life in the motorsports world. A long-time publicist, the best-selling author (this is his sixth book) has a way with words—which causes an unavoidable conundrum in a “As Told To . . .” auto/biography such as this: where does Unser end and Gurss begin? If you read or better yet watch any interviews with Unser you’ll find he is plenty articulate and also self-aware, and not at all hesitant to apply himself to matters of faith and sobriety and life and death. That the prose here has such spit and polish may well be Gurss’ doing but that does not diminish the authenticity of Unser’s own reckoning.

The individual beads of this story are certainly strung together in a most sensible and satisfying way. It is told in a fully rounded manner where everything has its place, and pace, from Little Al’s parents divorcing when he was little to demonstrating a grasp of the ideal racing line right from his start in karting as a nine-year-old and the domineering effects of both of these experiences on the whole of his life. Even at the highs, and there are so many—Sprint cars, Modifieds, Super Vee, Can-Am, Indy 500, Indy Car—you feel the proverbial straws piling up on the camel’s back. It seems inconceivable that none of the success kept Unser out of what he calls “the cage of little self-esteem or self-worth.” His answer—religion—is certainly not going to be everyone’s but don’t let that stop you for a moment from reading a fine, insightful, enlightening book. There is a very thorough Index to help you revisit things.

Unser (b. 1962) has already made it known that he doesn’t mean for this to be his one and only book. The Unser clan is the most successful family in the history of the Indianapolis Motor Speedway (nine wins) and even the generation before Al Sr. and his brother Bobby already showed their mettle on Pikes Peak before there was even a road and the mountain had been declared unscalable. Al Jr. makes a startlingly candid remark pertaining to what might well be the “motto”of all the generations of this driven family: “It’s not cheating if you don’t get caught.” And that applied to racing and women and life in every way. He is grappling with that, and since he considers writing about it cathartic, there surely is more to be said.

Hot Rodding International #13, The Best in Hot Rodding from Around the World »
« Mike Spence: Out of the Shadows