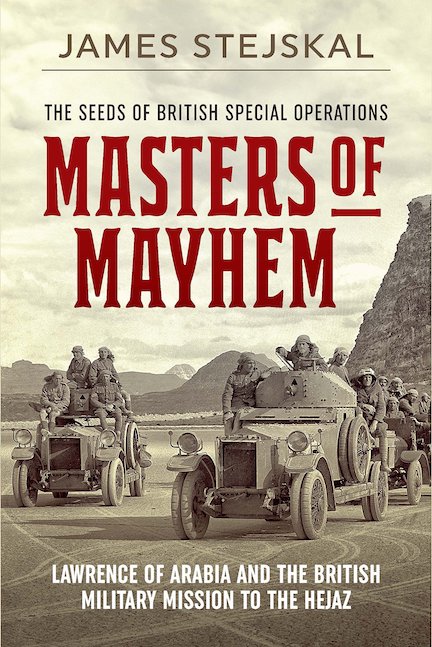 “After the conclusion of WWI, the British Army was considerable reduced in size as a cost-saving measure. Specialized units that were created for special circumstances were disbanded and with them much specialized knowledge disappeared.”

Thomas Edward Lawrence, best known by his moniker of “Lawrence of Arabia” is, undoubtedly, one of the most written-about figures of the twentieth century. My own Lawrence library includes more than 50 titles and yet it is far from comprehensive. Lawrence has been the subject of biographies, glorifications, canonizations, hit-pieces, fact, fiction, legend, myth and memory to the extent that even the primary records surrounding his life and accomplishments must be treated gingerly by historians.

Only in the last decade, perhaps in part due to renewed interest in the Great War coinciding with its centenary, have a number of serious historians taken a fresh look at Lawrence. With the tools of the modern historian at their disposal, these authors have been snipping away the legends and the myths to attempt to piece together a realistic portrait of Lawrence as a soldier, statesman, author and, in some ways, tragic figure.

This task has been made more difficult by the fact that Lawrence himself withdrew into obscurity and refused, after World War I, to correct the historical record surrounding his achievements and the Arab Revolt. This allowed authors to trade on the Lawrence name and legend in books that ranged from fanciful to downright damning. Puff pieces such as Lowell Thomas’ With Lawrence in Arabia (1924), Robert Graves’ Lawrence and the Arabs (1927), and Alistair MacLean’s Lawrence of Arabia (1963) were countered by biting criticism from authors such as Victoria Ocampo’s 338171 T.E.  and Richard Aldington’s T.E. Lawrence, a Biographical Inquiry (1955). Many of these authors attempted to profit by either building up or tearing apart Lawrence. In dozens of books, articles, serials, movies and other media between the end of WW I and the early 2000s, dozens of authors have thoroughly muddied the waters leaving a handful of modern historians the task of trying to pick up the pieces.

Despite the challenges, several superb books have been published in the past few years. These include Jeremy Wilson’s Authorized Biography of T.E. Lawrence (1989); Scott Anderson’s Lawrence In Arabia (2011); and Ronald Florence’s Lawrence and Aaronsohn (2008). Each of these books cover Lawrence through a slightly different lens and each shows its author’s passion for accurate, supportable history and their skills as researchers when it comes to cutting through the myth and fiction surrounding Lawrence. Though it may be impossible to create the perfect portrait of Lawrence these many decades after he lived, these authors accurately place him in historical contexts or portray him based on fact and research, not on myth and memory.

There is one more book about Lawrence that belongs with the above list of superbly written and researched recent books about Lawrence and that is Dr. James J. Schneider’s Guerrilla Leader (2011) in which Schneider, an historian and at the time, an instructor at the U.S. Army’s Command and General Staff College, examined Lawrence’s leadership skills through the eye of an experienced Army officer and a teacher of future military leaders. Schneider’s book represented the first real look at Lawrence in a book written by a fellow military leader. Schneider’s examination of Lawrence’s leadership traits, his interactions with the Arab forces and his later crises of confidence and gnawing self-doubt showed Lawrence in an entirely new light and one that is highly relevant to modern conflict. Schneider’s examination of Lawrence was revolutionary in that it came from within the military community.

James Stejskal’s book Masters of Mayhem and the British Military Mission to the Hejazis also a book written by an historian whose examination of Lawrence is shaped by a career that included more than 20 years in the United States Army Special Forces and a further 13 years serving as a field officer in the Central Intelligence Agency’s Clandestine Service. Stejskal’s examination of Lawrence, like Schneider’s, is based on a lifetime working in the special ops and intelligence communities around the world. As a result, these two books are in a class of their own when it comes to examining Lawrence in the context of his military accomplishments—and there were many.

To set the stage for the reader, Stejskal does an excellent job in the early chapters of Masters of Mayhem, providing context for the Arab Revolt in the First World War. His descriptions of the events that led to the broadening of the war into the Ottoman Empire the Hejaz, and today’s Middle East are concise and flow well. He also provides interesting background on the conflict’s early days, but without going into a level of detail that pulls the narrative away from the core theme of the book: that Combined Operations, often thought of as a World War II innovation, had their roots firmly in the First World War. He examines, too, the often-forgotten rescue of British prisoners from the HMS Tara, an auxiliary cruiser torpedoed off the coast of Libya—an operation that was a proving ground for some of the concepts that would gel into modern Combined Operations. This flows into more detailed looks at the Arab Revolt and the core events as one traces the flow of battle from early skirmishes to the triumphant entry into Damascus in 1918. Throughout, Stejskal demonstrates how these small unit actions formed the blueprint for what, today, we call Special Operations and Low Intensity Conflicts.

It is also important to note that the book is called “Masters” of Mayhem, not Master. This is not a book solely about T.E. Lawrence, but about the events in which he played a role, surrounded by a highly motivated and expert team of British military and intelligence officers. In fact, this is one of the most interesting aspects of the book because it shows how experts in their individual fields came together to bring industrial-age technology, ranging from aircraft to Rolls-Royce armored cars to Improvised Explosive Devices into the ancient art of guerrilla warfare. Stejskal shows the direct lineage between these nascent Combined Arms efforts served as a proving ground for the more famous Second World War actions by groups such as the Special Air Service, the Chindits, and the OSS “Jedburgh” teams as well as showing how modern military units such as the Special Forces got their start.

One notable chapter in the book is “Advisors, Dromedaries and Guerrilla Warfare” in which Stejskal describes Lawrence’s initial interactions with Feisal’s sons and his efforts to pull together diverse Arab tribes into a fighting force. Whether Stejskal does this consciously or not, his description of the process could serve as a script for the Special Forces Qualification Course culmination exercise called Robin Sage, in which candidate Green Berets live and operate for weeks in a simulated guerrilla war. All of the interactions between the British advisors and the Arab fighters would be familiar to today’s special ops soldier. It shows how small teams can act as force multipliers, work with indigenous personnel, and create battlefield outcomes that are disproportionate to their small numbers and often limited resources. This chapter is at the core of what makes Masters of Mayhem an especially timely book, because it shows that the principles of guerrilla warfare, despite the changes in technology, are timeless. It is no coincidence that Vo Nguyen Giap carried a copy of Lawrence’s Seven Pillars of Wisdom with him as he led Vietnamese forces during that conflict. And no coincidence that military leaders today, ranging from David Petreaus to William Mattis find value in the Hejaz campaigns of 1916–1918.

Another welcome feature of Masters of Mayhem is its generous use of maps! Far too many military history books either leave out the important visual elements of maps or they use hopelessly complicated military-style maps decipherable only to those trained . . . to decipher military maps. Stejskal’s book offers the reader outstanding visual depictions of the campaigns. The photographs are also very well-chosen, and the book includes not only photos taken by the author during his visits to the battlefields as an archaeologist and military history advisor, but reveal quite a large number of excellent, previously unpublished period pictures from the war in the desert.

If there is one fault I can find with the book it is that I would have liked more in-depth character details on the other officers, men, and even Arab fighters who were part of the campaign. Stejskal briefly introduces individuals such as demolitions expert Herbert Garland, Col. Stewart Francis Newcombe, Pierce Joyce, Ronald Storrs and Ralph Alger Bagnold, all fascinating characters whose diverse skills gelled into a highly skilled special operations team. It left this reviewer wanting more information about these counterparts to Lawrence. That said, Philip Walker’s recent book Behind the Lawrence Legend (2018) also does an excellent job of fleshing out many of the “others” who were the true Masters of Mayhem.

Overall, Stejskal’s book deserves its place in the ranks of the recent, superbly researched books that revolve around Lawrence and the Arab Revolt. In addition, it deserves to stand (almost) alone in a category of books that examine Lawrence and the Arab Revolt through the trained eye of the professional military and intelligence officer. Schneider accomplished that brilliantly when he looked at Lawrence through the lens of leadership; Stejskal has developed an equally important new facet of the Revolt in the Desert through the lens of the Special Operations and covert operations professional so in that regard, Masters of Mayhem stands alone.

Posted Under: History | Author: Other | No comments yet